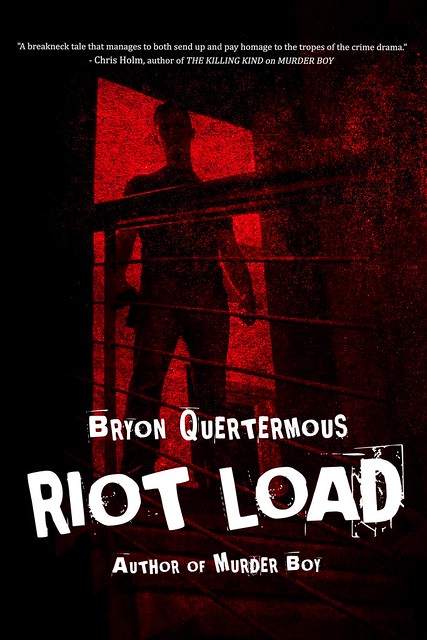 Sometimes you get what you ask for. What then? It’s a question both for Bryon Quertermous and Dominick Prince, the protagonist of his new novel, Riot Load. Quertermous is here to go into slightly more detail about it.

Very rarely am I able to capture the entire Big Idea of a book in the opening sentence, but for my current book, Riot Load, it happened like this:

I was two hours into my thirty-minute lunch break and taking in a baseball game on a stuffy mid-July day in Detroit when it occurred to me that getting everything I ever wanted was the worst thing that could have happened to me.

I finished my first novel when I was 24 and was immediately ready for literary fame and riches to descend upon me. It didn’t matter that I had already blown a number of great opportunities in my life; I was certain I was ready. Luckily for all involved I was the only one who thought that and it took another 13 years for me to sell my first novel.

By that point I was married, had two kids, a stable job, and a decade worth of experiences and connections to draw upon. I genuinely was ready. Had I been published at 24 with that book and tried to write a Big Idea essay then, it almost certainly would have declared myself the voice of my generation and would have been insufferable to a weaponized degree.

Dominick Prince, the main character in Riot Load, is not so lucky.  He was given a book contract and a lot of money before he was ready as a writer and well before he was ready as a person. When I started writing this book, I tried to put myself in his place and figure out what I would have done with more money than common sense and no direction in my life because the one single thing I had been striving for already happened. The answer of course is nothing.

That doesn’t make for a very good book though so I gave him one more dream he had been harboring: a marriage to his college crush. That’s when things really got going and I found myself working out a lot of issues of my own through Dominick’s adventures. The novel grew out of a short story I wrote years ago about a sperm bank robbery. The story itself was disgusting and when I pitched the idea to my publisher he was rightly concerned about the market potential of a disgusting book. But as I sold him on a new interpretation of the idea, I was also selling myself on it. A sperm bank robbery turned out to be a great forum to talk about my parenting fears and the weight of legacies humans have a tendency to saddle themselves with.

I did not take to being a parent easily. I was selfish and bitter and all-together insufferable about the whole thing. It wasn’t until my third kid I finally grew the hell up and stopped whining about it. But as I was writing about fatherhood with this book and weaving in this idea of having dreams come true too early I found myself also writing a lot about the idea of tying one’s identity to what they do.

Dominick achieved in a year everything he’d hoped to spend a lifetime pursuing and with that he lost who he was as a person. But with a new wife and an impending child he finds himself with the opportunity to recreate himself as a husband and as a father. He’s just as bad at it as I was, but he also has to deal with his wife being a bounty hunter and her family being in the middle of a struggle for control of their fading criminal empire. I had to deal with losing my dream job.

I’d been an editor for almost as long as I’d been a writer and those two pursuits made up the core of my identity so it was no surprise to me that in the space of three months I was hired to run the new crime fiction imprint of a respected publisher and then sold my first novel. I had absolutely no conflict in my life. I was enjoying two great careers, I had an amazing marriage and I was settling in and finally enjoying being a parent. That made the early writing of this book very hard.

The fates took pity on me though and ripped the job away from me after seven months sending me into a spiral of self-pity and anger. Suddenly I had no problem writing, but everything I wrote came out angry. I’m not an angry person I told myself. I’m easy going and optimistic.  But it turned out Dominick was very angry. While I wasn’t looking this character I had created as an avatar for my wasted years had become his own person independent of the autobiographical traits I had created him with.

And he was exactly the right character for me to be writing at that time.

What happens when you achieve your dreams too early? You find new dreams. The same is true if you fail to achieve a dream. Or if your dream morphs into something else. How a dream is achieved is as an important to the identity of a character, or of a real life person, as the dream itself. I’m lucky the pursuit of my dreams has led to success and failure in equal doses on a time frame that I’ve been able to handle. Dominick Prince has not been as lucky.

But his story is far more interesting to read about.