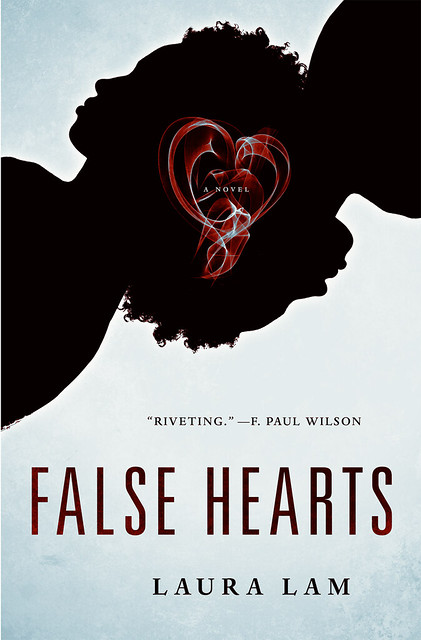 Book ideas can come from anywhere — but the time they take to get to an author can, well, vary. In the Big Idea for her novel False Hearts, author Laura Lam traces the path of the idea that became to dual hearts of her story.

Sometimes book ideas hit you in a sudden burst of inspiration. You want to yell “Eureka!” even if you’re at your desk in your day job, or in the middle of the aisle while shopping for food. All the pieces tumble into place and you have a plotted book sitting in your head within a couple of hours or a few days. Other times, it seems to come in frustratingly small dribs and drabs: you love this premise or this idea for a character, but you don’t yet know how to work it into a plot and what world it should take place in, so it ends up percolating for a while before finally coalescing into something you can work with.

False Hearts was more the second process. I had the Eureka premise hit me clear on the side of the head and I was really excited by it, but then the idea had to marinate a little. I can pinpoint to the exact moment I had the idea; it was lunchtime on February 25, 2013, less than a month after my first book, Pantomime, had been released. I’d finished the sequel, Shadowplay, and I was slowly working on the third book, Masquerade, even though it didn’t yet have a contract. I figured I should work on something else, too, just in case.  This proved to be a good move, as the imprint of the publisher that released my first books folded a few months later.

That lunchtime, I read this article on io9 by Annalee Newitz about conjoined twins Daisy and Violet Hilton. Daisy and Violet were conjoined at the hip and famous on the vaudeville circuit. They were sadly treated badly by their family and various managers, and their lives were a series of ups and downs. When vaudeville started winding down, they ended up moving into cinema. The article had a clip from Chained for Life, where both twins have to go on trial for a murder one of them committed.

Wham. Book idea: what if your literal other half was accused of murder, and you weren’t entirely sure whether or not they’d done it? How far would you go to find out the truth?

I have identical twin nephews and see how close they are. They fight, sure, but at the end of the day, they are inseparable. I started researching conjoined twins, watching interviews, documentaries, and reading a lot of nonfic. But it took a while to figure out what I should actually do with that idea—what genre, where it should be set, how everything was going to actually fit. In little dribs and drabs, it came together. With each new snippet, I did more research (subjects included futuristic architecture, possible medical advancements, how mobs work, how cults work, neuroscience, how drugs and dreams affect the brain). In the end, I wrote a thriller set in near-future San Francisco. I grew up in the Bay Area, but moved to Scotland when I was 21, so it was a nice excuse to go home in my imagination for a while.

The San Francisco of False Hearts looks like a utopia at first glance. Poverty is all but erased. There aren’t any major world-scale wars. Health care is free and advanced. Crime seems a thing of the past. The SF bay glows green at night from the algae they farm to bolster the food supply, along with orchard skyscrapers and vat-grown meat. Everyone has ocular and auditory implants, streaming information directly into their cortex. When pent up emotions grow overwhelming, people go to one of the many Zeal Lounges throughout the city, plugging into the drug that lets you exorcise your dark desires in dreams. They come out of the trip refreshed and soporific. A little more tractable. A little easier to control.

The twins in False Hearts, Taema and Tila, were born conjoined at the chest in a cult set where Muir Woods is now. This cult, Mana’s Hearth, has been completely cut off from modern technology, and they essentially live like 1969 summer of love hippies. Like many cults, there’s a sinister undertone. Changing yourself in anyway is considered sacrilege—if you’re ill, you can use some rudimentary herbs, but otherwise you must bow to the will of the Creator.

At sixteen, when their shared heart starts to fail, Taema and Tila do not bow. They run.

In San Francisco, there is a pressure to fit into the narrow confines of what society considers perfection. Thanks to gene therapy and walk-in flesh parlours, people rarely let themselves age. Society has no idea what to do with conjoined twins, and, though the twins don’t really want to, they are pressured into being separated and fitted with mechanical hearts. Over the next ten years, the sisters subtly drift apart.

Then, one night, Tila stumbles into Taema’s house, covered in someone else’s blood. She’s arrested by the first murder from a civilian in decades. It’s all kept out of the papers, and soon Taema is given a proposal: they think her sister was involved with the Ratel, the underground mob of San Francisco that deal in a dangerous new dream drug called Verve. If Taema takes her sister’s identity and works with an undercover detective and finds out what’s going on in the Ratel, then SFPD might let her sister live rather than being thrown into stasis for her crimes.

Taema can’t stand that her sister has kept such a big secret from her. It eats at her. So she follows her sister into the dark underbelly of San Francisco, and ends up realising they didn’t leave their past as far behind as they’d hoped. At first, Taema is sure that her sister was not capable of murder. The father she falls down the rabbit hole, the less sure she is: and if Taema’s sister is capable of murder, what does that say about her?