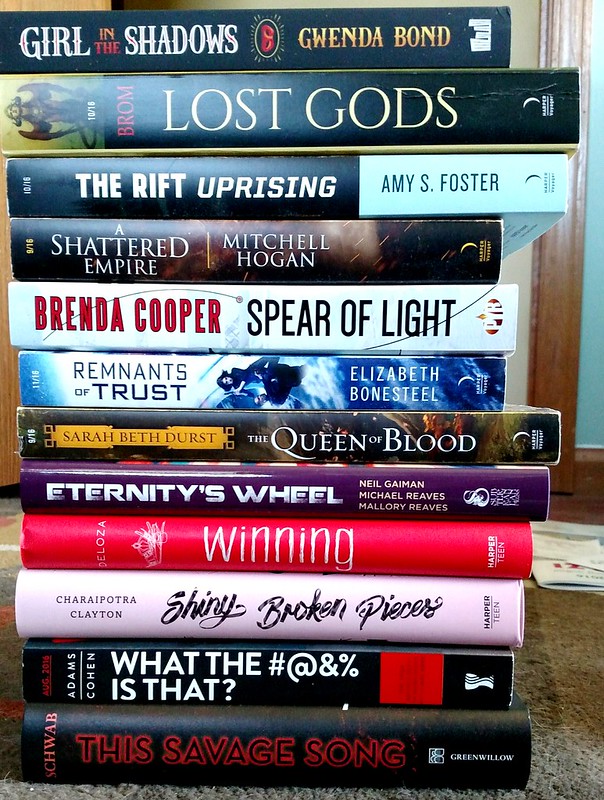 Just in time for the weekend, another fine stack of new books and ARCs that have come to the Scalzi Compound. Which of these books call to you? Tell me in the comments! 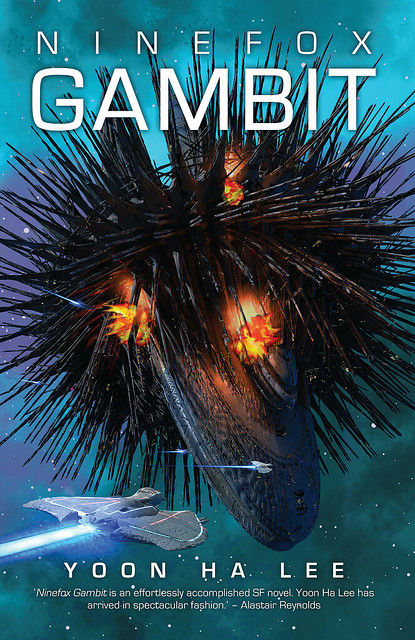 Within the novel Ninefox Gambit is a battle of wits between two very accomplished characters — and making that struggle work was no small task for author Yoon Ha Lee. What’s the secret? Read on!

Once upon a time, as a young, impressionable Yoon, my boyfriend-now-husband introduced me to BattleTech. One of the parts that fascinated me about BattleTech’s backstory was the bit where the well-respected Genereal Aleksandr Kerensky was so disgusted with his regime that he and six million followers abandoned the Star League to found their own nation. I was impressed by how charismatic Kerensky would have had to be to pull this off.

Fast forward some years, after I’d decided to write a space opera, as one does. I’d been nosing about the TV Tropes website, specifically my favorite pages, Moral Event Horizon, Chessmaster, and Magnificent Bastard. What if I ran Kerensky backwards, I wondered? Take a charismatic, brilliant general–and instead of him being so well-respected that he could secede from an interstellar nation and take six million people with him, make him feared and reviled. Say that he massacred a million people at his last battle: civilians, the enemy army, and his *own* army.  (How’s that for a Moral Event Horizon?) He’s been preserved as an undead tactician for four centuries because he was just that good, and because they think they’ve tamed him–even though no one *still* knows why he did what he did, or if he just went mad and might do so again.

And then imagine an infantry captain in her mid-twenties with Jedao as her advisor, trying to make use of him in a hardfought space siege while ensuring that he doesn’t betray her and everything she stands for. My protagonist, Kel Cheris, is smart–even brilliant in her own way–but Jedao may be deadlier than all the enemy soldiers she faces.

Sure, I was going to have battle scenes and bloodthirsty science fantasy weapons and so on, but I knew the most important thing would be selling the tense relationship between Jedao and Cheris. From the beginning I constructed them as complements. Jedao is extroverted, persuasive, intuitive, devious.  So Cheris is introverted, self-contained, calculating, honest.  So far, so good?

Not so fast. Both of them were also supposed to be geniuses: Jedao at tactics and psychological warfare, Cheris at math. It’s possible that writing geniuses is easy when one is a genius oneself; I wouldn’t know, because I’m definitely not a genius. (I have since sworn that maybe the next thing I should do is write slapstick comedy about stupid-ass generals, not brilliant tacticians.)

So I cheated.  A lot. One of the first things I did was to reread James Dunnigan & Albert A. Nofi’s Victory and Deceit: Dirty Tricks at War. I wrote down all the stratagems I liked, then tried to shove all of them into the rough draft. (And then there was too much plot so I had to take some of them out.)  And of course, their opponent also had to be smart. I’d learned this from reading Gordon R. Dickson’s Tactics of Mistake, a novel I found infuriating because the “tactical genius” mainly geniused by virtue of the opponent being stupid, which I’m sure happens all the time in real life but makes for unsatisfying narrative. Besides all the military reading I did, I also hit up social engineering and security engineering.

But I still wasn’t done. I had to sell Cheris and Jedao as characters. Characterization has always been the part of writing that I find the most difficult. I also had to portray both characters in such a way that Cheris, while outmatched, wouldn’t be totally overwhelmed. I wanted her to be the underdog, but not to have no chance whatsoever! So part of writing her involved setting up her arc so that she grew into a true ally/opponent.

The other thing that gave me difficulty when writing Cheris is that she’s a woman, and I had to be in her head for large chunks of the novel. I’m trans, identifying as male, and while I try to make a point of writing female POVs in my short fiction, it’s not without its cost. Growing up, I got caught writing trans protagonists in my fiction in middle school, and my teacher notified my mother. This was before I had any vocabulary for this stuff, but when my mother made a concerted effort to shove me into skirts and dresses and get me to behave in more conventionally “feminine” ways, I had a hard time dealing. It wasn’t until much later that I felt comfortable coming out even to people very close to me. Even today, spending extended periods of time writing a female POV is painful not because women are evil–I have a twelve-year-old daughter and I would very much like for her to grow up in a world where she has all sorts of great female role models, fictional and real–but because of my own baggage. Writing male POVs is the only place in my life where I get to “be” male, and it’s hard to give that up. So part of writing Cheris involved working through that.

Jedao was a challenge for a different reason. He’s undead, and part of the complication is that he has no body; he pretty much exists as a disembodied voice. So (with a few exceptions) I couldn’t rely on body language, or facial expressions, or any of that. Everything had to come through on the strength of the dialogue. The good part was that Jedao was an astonishingly cooperative, talkative character and I got a clear sense of his personality pretty quickly. The scary part was that once he got going he wouldn’t shut up. And as Cheris discovers, Jedao may be a mass murderer, but that doesn’t automatically mean that his critiques of their government are automatically wrong.

I don’t know if I succeeded in writing a chessmaster (or two, or three), let alone a Magnificent Bastard, but at least the attempt was fun! You’ll have to let me know how I did.