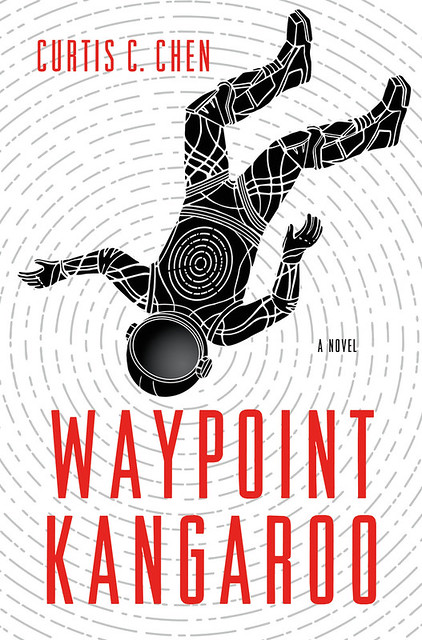 Hey! Curtis C. Chen is a former student of mine! And now he has his debut novel, Waypoint Kangaroo! Naturally I take all credit for his success. Now, pay attention while Curtis tells you about his book.

My debut novel Waypoint Kangaroo exists because of a robot cat from the future. Lemme ‘splain.

Though I grew up in the United States, I was born in Taiwan, and my late paternal grandfather owned a bookshop, so as a young child I had access to a variety of reading materials. One of the book series I discovered and fell in love with as a child was Doraemon, a popular Japanese manga that had been translated into Chinese. It was probably also my first contact with science fiction in book form, and it influenced me pretty deeply.

Oddly enough, Doraemon is still virtually unknown in the Western hemisphere, despite enjoying immense popularity all across Asia since his introduction in 1969–he’s even been called “the Mickey Mouse of Japan.” The good news is, US residents can now watch episodes of the 2005 Doraemon anime on the cable channel Disney XD, where he’s billed as a “Gadget Cat from the Future.”

I won’t get into Doraemon’s backstory here (you can read about that at doraemon.com). The important thing is that Doraemon keeps all his futuristic gadgets in a “4th Dimensional Secret Gadget Pocket,” a pouch built into his belly–and that was the inspiration for my character Kangaroo’s superpower, which he simply calls “the pocket.”

However, since my goal was to write a spy novel for grown-ups, not a comic strip targeted at pre-teen children, I wanted to be more rigorous in terms of how Kangaroo’s pocket works and what its limitations are. I wanted his superpower to be internally consistent and to generally adhere to the laws of physics as we understand them today.

I also didn’t want the pocket to be useful in every situation, which meant coming up with very clear rules for when and how Kangaroo could use it. My friends and fellow writers helped me think through those issues by asking many questions of the “Can he do X? What if he does Y? Why wouldn’t he do Z?” variety.

Here are the basics of what I came up with:

Once I had a general idea of what Kangaroo could and couldn’t do with the pocket, I started thinking about “edge cases.” How do I set up situations where the pocket is the only or best way to solve a certain problem, but it’s going to be a challenge for Kangaro to use it in that particular way? And given that he’s not so great at all the other spy stuff–his bosses really only want to use him as a courier–what does he do when things go sideways in the field, and he can’t use the pocket at all for some reason?

I hope you have as much fun reading about Kangaroo’s adventures as I did making them up. And if you don’t see your favorite “stupid pocket trick” in Waypoint Kangaroo, don’t panic–book two is coming soon!