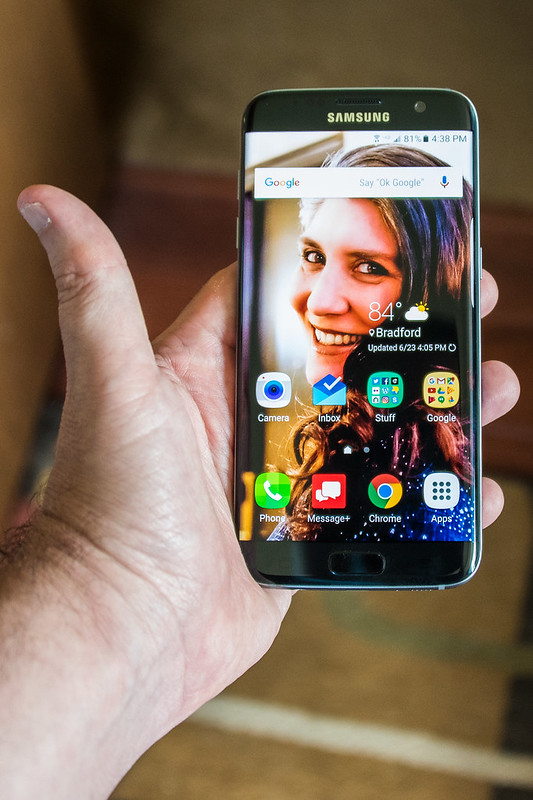 On Monday my old phone, a Droid Turbo, met up with an accident, and it became incumbent upon me to replace it. Fortunately, life had prepared me for this because I spend a lot of time looking at reviews of new phones just in case my current phone should be carelessly dropped, or hurled, or whatever, so when I walked into my local store to get another I had a pretty good idea of what my top candidates were. For the past few phones I’d been using the Motorola Droid line, and if the new Droid Z had been available yet, there’s a pretty good chance I’d’ve picked it up.

But it’s not, so instead I decided to pick up a Samsung S7 Edge, which aside from various good reviews, also came with a deal that threw in one of their VR goggle sets (I have to mail away for it, so I don’t have it yet). So I figured, what the heck. I’ve had it now for four days, which is enough time for some first impressions.

Briefly: So far, so good. There’s no doubt that it is the prettiest cell phone I’ve ever owned, although I will be first to note this is not a difficult competition to win — I’ve been going with the Droids these many years for their massive batteries and Motorola’s better-than-any-other-manufacturer take on Android skinning, not their esthetics, which can be summed up as “look chunky and don’t give a shit about it.” The S7 Edge, on the other hand, has a gorgeous, curving screen that falls away in a lovely fashion, and feels (especially coming from the Droids) deceptively thin and light. It’s a phone that you can pet and call your precious, basically.

But the good news, for me, anyway, is that there is more there than just the pretty screen — notably the 3,600 mAh battery, which means that like the Droids this is a phone that can actually go an entire day without needing to be recharged (this is where iPhones, also pettable, fall down in my opinion), which for someone like me who travels a stupid amount, is actually a critical thing. It’s also got the other hardware bells and whistles — better than retina-level screen, decent camera, fast processor and ample RAM — which make me happy. So it’s pretty and practical, which is nice. The phone also allows for expandable storage, which is great.

With that said, there are a couple of things anyone thinking of picking it up should know about. Specifically, if you pick up the “Edge” iteration of the S7, you should be aware that the fact the (yes) edges of the phone are now touch-sensitive may require you to retrain yourself in terms of how you hold the thing, lest your beefy mitts cause your phone to register touches where you do not intend, just by how you hold the thing. I’ve had this happen to me more than a few times already. It’s a small annoyance and definitely not a deal-breaker, but it’s something to be aware of. Also annoying and possibly more so: the positioning of the speaker at the bottom of the phone is in a place where it gets covered a lot by my hand, which means that as I’m listening to things, the sound would seemingly drop out for several seconds, just because I moved the phone in my hand. This is not pleasing to me.

My other complaints (mostly about the layout of buttons, both physical and capacitive) are less about Samsung’s choices and more about the fact that they’re not laid out like Motorola’s Droid phones, which were my last several phones, and thus are not where my memory tells me they are. This is a personal issue, and I suspect I will get over it.

So overall I’m happy with my purchase, although I am still getting used to Samsung’s interface not being Motorola’s. For anyone looking at the Edge as a possible next phone, be aware the edge aspect, while cool-looking, also requires getting used to. But if you can do that, it’s a lovely phone so far.