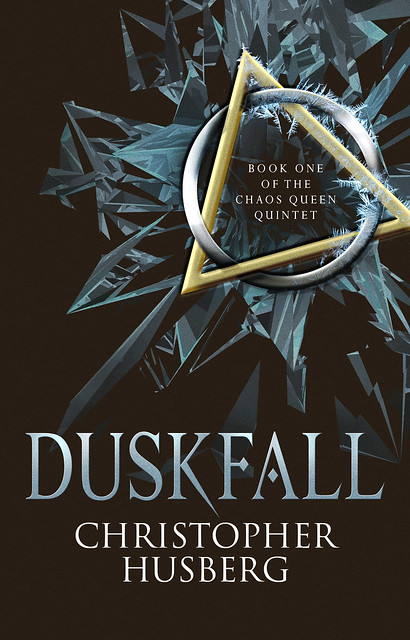 Don’t let Christopher Husberg near a wood chipper. Or, as he explains regarding his novel Duskfall, maybe… do?

In some ways, I’ve been writing Duskfall my entire life.

Wait, that sounds too grandiose. It’s not like Duskfall is my darling or anything.

…okay, it is in a way, but more like a Frankenstein-y conglomeration of a bunch of little darlings I’ve killed, put through a wood chipper, and stitched back together. Gruesome, but true.

That fact has actually made it tough for me to choose a “big idea” to talk about. I’ve thrown dozens of them into Duskfall over the years, and the book itself seems to outgrow each one as I’ve revised and edited the thing. One idea does stand out, though, and that’s the magic system of Duskfall: psimancy.

There’s a lot to talk about in regards to psimancy—like the fact that it is psionic in nature, has three distinct branches (a telekinetic branch, a telepathic branch, and a prescient branch), and the roots of the magic system are actually based in Quantum Electrodynamics. But the big idea behind the magic system that I’ll focus on today is a bit more personal in nature.

Many of the characters who use psimancy in the Chaos Queen ‘verse require the ingestion of a narcotic to access that power. The narcotic is highly addictive—one of the major costs of using psimancy. The central character of Duskfall, a young woman named Winter, discovers she can access psimancy through the drug. A large part of the plot then revolves around her attempting—and usually failing—to deal with the addiction that threatens to destroy her and her connection to reality. As is the case with just about every addiction, I try to show how Winter’s dependency on faltira not only destroys herself, but her relationships with all of the people she cares about as well.

I’ll get back to the addiction stuff momentarily, but let me switch gears for a sec. There’s a saying in writerdom to “write what you know.” As someone who writes speculative fiction, I’ve always taken this advice with a grain of salt. It can certainly be helpful, and potentially very powerful, to draw from personal experience and emotion when writing, but I also don’t think it’s entirely necessary. And the strange truth is, it seems readers often connect with the things I simply research or conjure out of my own imagination far more than the things I’ve actually experienced.

Being honest, I didn’t even know I was writing a story about addiction until I was partway through the novel. It was one of those things that crept subconsciously into the storytelling, and into Winter’s character in particular. I realized some time later how much all of the addiction stuff I was trying to express in the novel reflected what I and some people very close to me have experienced. Addiction and its consequences have threatened to destroy my own life as well as the lives of a number of loved ones and close friends, and once I realized how much it affected my writing, addiction seemed almost an inevitable, and certainly an integral, part of Duskfall.

You can imagine my surprise when my agent’s first notes about Duskfall focused heavily on how the addiction sequences in the novel didn’t feel genuine or real at all!

I was shocked and a bit bewildered at first, but listening to how my agent described things, I knew he was right. The addiction sequences weren’t working. They were disjointed and shallow. I’d let my subconscious include them without thinking deeply about how they should all work together in the story, and that was a mistake. So, I went to work.

One of the most difficult aspects to handle was the resolution of Winter’s addiction storyline at the end of the novel. It was problematic for a number of reasons, not the least of which was that I wanted some kind of denouement for Duskfall while at the same time leaving the addiction storyline some room to expand into later books—quite a bit of room, actually. But the more immediate problem was how I wanted Winter to feel about choosing to take the drug to access psimancy—given the choice between the immense power she could access in taking the drug, and keeping her relationships with her loved ones and her grip on reality intact, what would she choose? Could she find a balance? And what if choosing the drug was the only way to protect those close to her, but made her lose them in the process?

I won’t spoil it, of course, but I think I found a satisfying conclusion.

Writing about personal experiences—especially difficult, profound, and/or emotional ones—is one of the bigger challenges I’ve faced as a writer. Taking specific, personal experiences, and trying to tell them in such a way that they can be universally applied while still feeling uniquely personal…that’s a tough balancing act, but when it works out, the results are pretty incredible.

So I actually do stand by what I said in the beginning. I’ve been writing DF my entire life— but I think that’s pretty normal. The stories we tell, the things we write for others to read and hear, incubate inside us for a lot longer than perhaps we realize. I think that’s really what all stories are, anyway—conglomerations of emotions, experiences, knowledge, imagination, and little darlings we’ve thrown in the wood chipper.