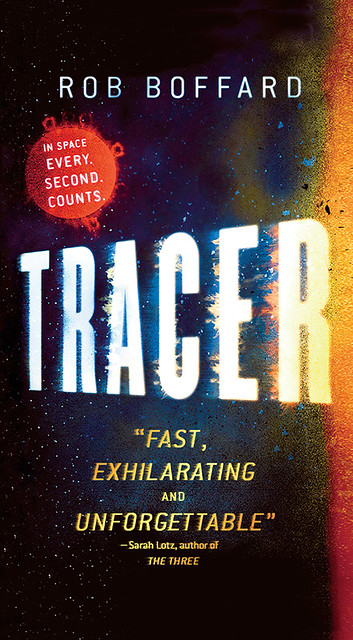 In today’s Big Idea, author Rob Boffard explains how a quartet of animated Testudines inspired him for his novel Tracer. And what, pray tell, is a Testudinata? Just you wait.

It all started with the Teenage Mutant Ninja Turtles.

I’m thirty-one now, and for the past twenty-five years or so, the Turtles have been my heroes. Why wouldn’t they be? The world as I know it is confusing, exasperating and frequently ridiculous, but the Turtles are as straightforward as they come. Even now, when they’ve become an object of nostalgia under the withering gaze of Michael Bay, I still love them. Raphael, since you ask.

I love them because of what they represent. No matter how chaotic things are, no matter how many interdimensional hazards and weird mutations are thrown at them, they’re still a team. Four dudes, up against the world. They’ve each got their own personalities and quirks, but at the end of every episode, they put aside their differences and run a four-way beatdown on Shredder and whichever cackling co-conspirator he’s cooked up that week.

Of the twenty-five years that I’ve loved them, it took me a good twenty-three to work out why. I dug the turtles because I wanted to be a part of their team. I wanted to have my own weapons, my own catchphrases, my own martial arts style. More than anything, I wanted to fight alongside them at the end of each episode, then go back home to our secret base. Screw the fifth Beatle; I wanted to be the fifth Turtle.

Sadly, nobody has invented a radioactive mutagen to turn me into one, so I’m stuck being a regular, pink, squishy, bipedal hominid. But the more I thought about this, the more I realised that the stories I was drawn to my childhood all involved teams. G.I. Joe, the X-Men, the Avengers, the Runaways, Thundercats… Who wouldn’t want to be a part of all that?

When I started thinking about the world of Tracer, that idea was bubbling to the surface – even if I didn’t know yet. I already had my setting: a grimy, rusted, overcrowded, hundred year old space station holding the last of humanity. It was ripe with stories. I could have told the tale of anybody on board – a cop, a plumber, a ship pilot, a politician, hell, a tattoo artist. Any one of them would have had an interesting story to tell. But subconsciously, I gravitated towards that idea of a close-knit team.

It came about when I realised that public transport on my station would be shot to shit. There’s no way it’d still be working after a hundred years. And on a station that size, you’d need ways to get packages and messages around, right? You’d need couriers. Before I knew it, I was writing the story of one particular courier and her crew. If I couldn’t be part of a superhero team, I was going to write about one that was just as cool.

Riley’s our hero. She’s the fast one, the woman you go to when you need to get a package from A to B in a very short time. She’s tough, loyal and not afraid to get her hands dirty. Amira is the team’s leader: stoic, disciplined, deadly in a fight. There’s Carver, the team’s gadget guy, goggles plastered firmly on his forehead, bent over his workbench. Then there are The Twins: the wisecracking, pint-sized Yao Shen and her oversized, taciturn buddy Kevin O’Connell. If you’ve matched them to their total equivalence, you’re thinking like I was. (The Twins are Michelangelo, obviously, his wit and his strength parcelled out onto two people.) And of course, they’ve got a secret base – although this being a working space station, it’s nothing more than a tiny, cramped space between the levels.

The Turtles were the inspiration, but that’s where the similarities end. The story I wrote turned out to be nothing like the colourful, cartoony escapades of our heroes in a half shell. There was no villain of the week. My tracers didn’t get to go back home and share a pizza when the job was done. My space station, Outer Earth, turned out to be a very dangerous place, filled with very dangerous people and the story I wrote ended up being an insane, blisteringly-fast, cinematic action epic – more Mad Max than TMNT.

Tracer is just the first book. There are two more, coming in the next couple of months, continuing the sprawling story. I can’t promise that all the members of my team are going to be around at the end of it. But even now, I still think of them as my team, and I still imagine what it would be like to be a part of them. To run with them, and to know that they’ve got my back just like I’ve got theirs.

While I was writing the story, I kept a few scrawled notes and diagrams in a battered old notebook. At that time, I was doing some contract work at a recording studio in London. One day, I had my notebook open on my desk for some reason, and a colleague walked by and spotted it. In particular, he spotted the badly-drawn diagram of my space station, sketched out so I’d have an idea of where things happened. He didn’t know about my book. All he saw was a childish drawing.

“Is that your secret base, then?” He said, in that peculiarly dismissive tone that people have when their imagination has atrophied beyond repair.

Of course, I laughed along with him – he was responsible for my paycheque, after all – and quickly closed my notebook. But I couldn’t help myself from thinking: maybe it is.