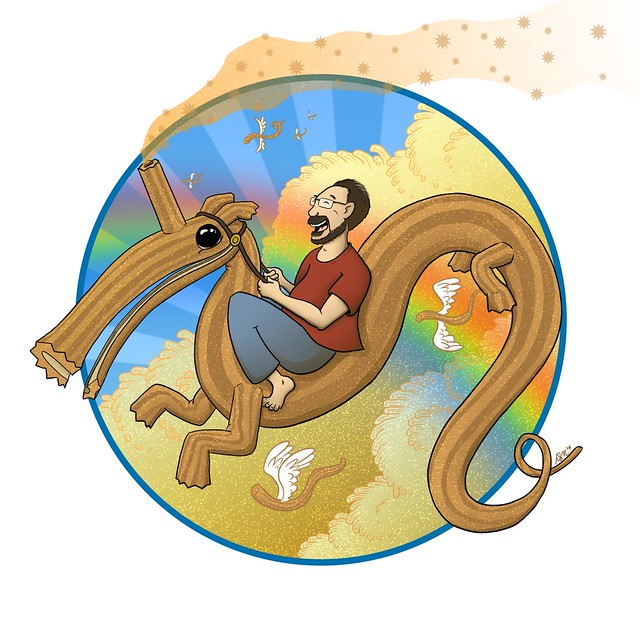 So, hey, here’s something that should make at least some of you happy: I’m putting out a story collection through Subterranean Press called Miniatures: The Very Short Fiction of John Scalzi. Just as the title suggests, the eighteen pieces that are included in Miniatures are very short — the longest is a smidge under 2,300 words — and most of them are (surprise!) humorous. If you’ve seen me on book tour, you’ve probably heard me read from some of these pieces. I’m very excited to share them with you all in print.

In addition to fourteen previously-published stories (including the Sidewise Award-nominated “Alternate History Search Results”), the collection includes four never-previously-appearing-in-print stories: “Your Smart Appliances Talk About You Behind Your Back,” “Important Holidays on Gronghu” and “The AI Are Absolutely Positively Without a Doubt Not Here to End Humanity, Honest,” all of which were written exclusively for this collection, and “Morning Announcements at the Lucas Interspecies School for Troubled Youth,” which I performed at W00tstock a few years ago but never put into print. Fixed that! Also, several of the stories were previously published in rare and/or hard-to-find editions. This collection makes them much easier to find, read and enjoy.

I’m also super excited to say that Natalie Metzger, who created that fabulous image of me riding a churro-corn that you see above, is providing art for the book — both the cover and illustrations for each of the stories. I asked for her specifically because I think her sense of whimsy and humor match the pieces in Miniatures perfectly, and happily Subterranean Press agreed. Natalie and I met during Westercon this last weekend to chat about her illustrations and I couldn’t be more pleased by the ideas she has for the book. You’re going to love them.

Subterranean is releasing Miniatures in a signed, limited print edition of 1,500, which means every copy will be signed by me — no need to hunt me down for an autograph. Those will be $40 each. Or you can get a lettered and leatherbound edition for $250 (there will only be 52 of those). So yes, the print editions will be collector’s items. Pre-ordering would be advisable. Subterranean will also be releasing an electronic edition (pricing to be determined later, but cheaper). And yes, before you ask, there is very likely to be an audio edition, and I will get you more details on that when it comes available. Heck, there’s going to be at least one foreign language edition, too, so it’s got that going for it as well.

Miniatures is going to be a ton of fun in a small package, and I can’t wait for you to see it. 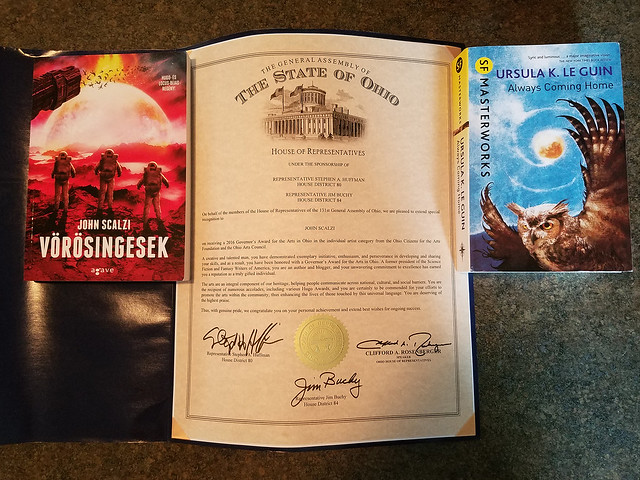 They are, from left:

And I got another dozen books or so from other folks, which I will be showing off a little later in the week, you know, as I do.

And how, you ask, was Westercon 69? Well, I had fun, at least! All my panels went very well, and at my reading I’m happy to say that I got my family and fellow GoH Bobak Ferdowsi involved:

We were all reading from a new, never-before-presented short story called “The AI Are Absolutely Positively Without a Doubt Not Here to End Humanity, Honest.” It went pretty well; my daughter was particularly good in the part of Destructor, Ender of All Humanity.

Plus, at Westercon, we had donuts!

So, yes, we had a pretty good time. Hope your July 4th long weekend was also a good one.