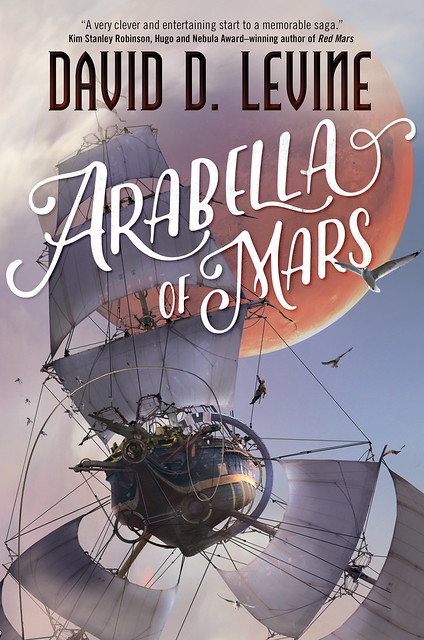 When Hugo-winning writer David D. Levine went looking for inspiration for his debut novel Arabella of Mars, he chose from some eclectic sources, from a Grand Master of fantasy to one of the most acclaimed nautical novelists of all time. How does it all fit together? Levine is here to tell you.

My first published novel, Arabella of Mars, has been incubating for a long, long time. I started writing it in 2011, finished it in 2013, sold it in 2014, and now it’s finally coming out in 2016… but the Big Idea for it came even earlier. It started with a throwaway line in Gene Wolfe’s The Urth of the New Sun, in which the narrator Severian voyages on a spaceship which is described as having masts and sails. To go out on deck one must don a “cloak of air” against the vacuum, and one sailor cannot hear anything said by another unless the two come so close that their cloaks touch. “I have heard it said,” Severian writes, “that if it were not thus, the roaring of the suns would deafen the universe.”

I probably read Urth of the New Sun when it first came out (1987), and that line just stuck in my head. When I started writing short stories in 1999, after a long hiatus from writing fiction, that line was one of the ones I put in my idea file, where it simmered at the back of my mind’s stove for another ten years or so. The main worldbuilding implication of that idea was plain from the beginning: if the sky were full of air, one could travel to other planets by sailing ship. Space travel without modern technology is an idea I love (I explored it in my short story “Ukaliq and the Great Hunt”) and I was sure I could build a great world on it. But how to turn that idea into a story?

The first approach I had to the idea was to ask: if the sky were full of air, how would humanity have discovered this? After some thought — and, again, considering that Gene Wolfe quote — I figured that it would likely have been discovered during the Age of Enlightenment, with Franklin or Newton noticing an inexplicable, pervasive vibration spoiling his experiments and this leading to the discovery of the “roaring of the suns.” But this wasn’t much of a story in itself — it was backstory at best.

Having begun with the idea of the Age of Enlightenment, I kept thinking about this story as an alternate history. If space travel by sail were possible, it would have become commonplace in the age of sail, and of course humanity would have colonized the planets — which would, of course, be inhabited. Pretty soon I came up with the idea of a troupe of players in the 1700s, traveling to Mars and Venus to entertain the troops in the wars of the era. But, again, this wasn’t quite a story.

While I searched for a story, I was also noodling about the science and technology of this alternate world. At first I thought that I would be able to make just one change — filling the solar system with air — and have the rest be hard SF, with real physics. Well, that turned out not to be possible. For one thing, air isn’t really that transparent; consider how red the sun looks when viewed through only a few miles of the stuff (at the horizon, as opposed to overhead). If there were eight light-minutes of air between here and the Sun, you wouldn’t see more than a dull red glow in that direction. For another thing, there’s the pesky problem of the distances involved being too vast to travel in any reasonable amount of time at sailing-ship speeds. So I fudged: the “interplanetary atmosphere” is something that’s breathable but far more transparent than air, and the size of the solar system is considerably smaller. I also had to tweak the value of G and some other basic physical constants. Wherever possible, though, I used real physics and real technology, and I worked out how to launch and navigate in three dimensions and zero gravity in way too much detail.

During the years when all this was going on in my head, I fell in love with the seafaring novels of Patrick O’Brian and decided that the Napoleonic Wars were just the thing for drama, excitement, and high stakes. Furthermore, I decided that the main character had to be a girl who dressed as a boy to join the crew of an interplanetary clipper ship. Why a girl? Because women have more problems to overcome than men, which makes them more interesting protagonists. Why dressed as a boy? To interrogate the sexism that means women have more problems to overcome than men! I knew from the start that Arabella — unusually for me, her name was Arabella from the beginning and I never considered changing it — would be a Patrick O’Brian girl fighting against a Jane Austen world.

Eventually, with the help of many friends (thanks especially to Sara Mueller) I figured out why someone in this world would do something that crazy, and then I wrote it all down, and then with more help I made it better and got it accepted for publication. And now, after all that work, you can finally read it for yourself. This is only the first of Arabella’s adventures, and beyond that there’s two hundred years of alternate history in this world to explore. I hope you like it!