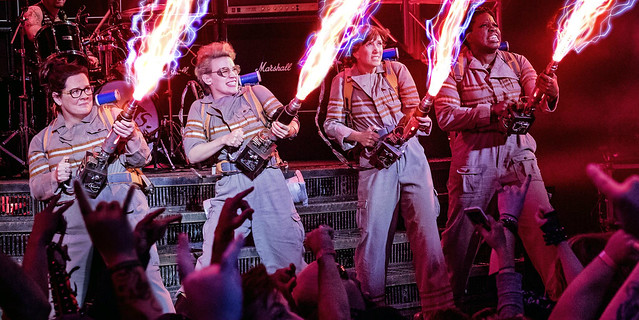 What I thought of the new Ghostbusters: I liked it, and would happily rewatch it. It’s definitely the second-best Ghostbusters movie, and much closer to the original in terms of enjoyment than the willfully forgotten Ghostbusters 2. There are legitimate criticisms to make of it: the plot is rote to the point of being slapdash, the action scenes are merely adequate, and Paul Feig is no Ivan Reitman, in terms of creating comedic ambiance. But the film got the two big things right: It has a crackerjack cast that’s great individually and together, and it has all the one-liners you can eat. And now that the origin story of these particular Ghostbusters is out of the way, I’m ready for the sequel.

But what about the Ghostbusters being all women?!??!?? Yes they were, and it was good. If you can’t enjoy Melissa McCarthy, Kristen Wiig, Kate McKinnon and Leslie Jones snarking it up while zapping ghosts with proton streams, one, the problem is you, not them, and two, no really, what the fuck is wrong with you. The actors and the characters had chemistry with one another and I would have happily watched these Ghostbusters eat lunch, just to listen to them zap on one another. And in particular I want to be McKinnon’s Holtzmann when I grow up; Holtzmann is brilliant and spectrum-y and yet pretty much social anxiety-free and I honestly can’t see any sort of super-nerd not wanting to cosplay the shit out of her forever and ever, amen.

BUT THEY’VE RUINED MY CHILDHOOD BY BEING WOMEN, wails a certain, entitled subset of male nerd on the Internet. Well, good, you pathetic little shitballs. If your entire childhood can be irrevocably destroyed by four women with proton packs, your childhood clearly sucked and it needs to go up in hearty, crackling flames. Now you are free, boys, free! Enjoy the now. Honestly, I don’t think it’s entirely a coincidence that one of the weakest parts of this film is its villain, who (very minor spoiler) is literally a basement-dwelling man-boy just itchin’ to make the world pay for not making him its king, as he is so clearly meant to be. These feculent lads are annoying enough in the real world. It’s difficult to make them any more interesting on screen.

But this is just the latest chapter of man-boys whining about women in science fiction culture: Oh noes! Mad Max has womens in it! Yes, and Fury Road was stunning, arguably the best film of its franchise and of 2015, and was improbably but fittingly nominated for Best Picture at the Academy Awards. Oh noes! Star Wars has womens in it! Yes, and The Force Awakens was pretty damn good, the best Star Wars film since Empire, was the highest grossing film of 2015 and of all time in the domestic box office (not accounting for inflation. Accounting for inflation, it’s #11. #1 counting inflation? That super-manly epic, Gone With the Wind).

And now, Oh noes! Ghostbusters has womens in it! Yes, and it’s been well-reviewed and at $46 million, is the highest grossing opening for its director or any of its stars and perfectly in line with studio estimates for the weekend. Notably, all the surviving principals of the original film make cameos, suggesting they are fine with passing the torch (Harold Ramis is honored in the film too, which is a lovely touch), and Ivan Reitman and Dan Aykroyd are producers of the film. If your childhood has been ruined, boys, then your alleged heroes happily did some of the kicking.

I’m an 80s kid; my youth is not forever stained by a Ghostbusters remake, any more than it was stained by remakes of Robocop or Point Break or Poltergeist or Endless Love or The Karate Kid or Clash of the Titans or Footloose or Total Recall and on and on. I think most of these remakes were unnecessary, and I don’t think most of them were particularly good, or as good as their originals, and I question why film companies bother, aside from the “all the originals were made before the global movie market matured and there’s money on the table that can be exploited with these existing brands,” which is, of course, its own excuse.

But after a certain and hopefully relatively early point in your life, you realize remakes are just a thing the film industry does — the first Frankenstein film listed on imdb was made in 1910, and the most recent, 2015, and Universal (maker of the classic 1931 version) is planning yet another reboot in 2018 or 2019 — and maybe you get over yourself and your opinion that your childhood is culturally inviolate, especially from the entities that actually, you know, own the properties you’ve invested so much of your psyche into. It’s fine to roll your eyes when someone announces yet another remake, tweet “UGH WHYYYYYY” and then go about your life. But it causes you genuine emotional upheaval, maybe a reconfigure of your life is not out of the question.

(Not, mind you, that I think these shitboys are genuinely that invested in Ghostbusters, per se; they’re invested in manprivilege and, as noted above, would have wailed their anguished testeria onto Reddit and 4chan regardless of which cultural property had women “suddenly” show up in it. This is particularly ironic with anything regarding science fiction, which arguably got its successful start in Western culture through the graces of Mary Shelley. Women have always been in it, dudes. Deal.)

The happy news in this case is that, whether or not this Ghostbusters reboot was necessary, it’s pretty good, and fun to watch. That’s the best argument for it. I’m looking forward to more.