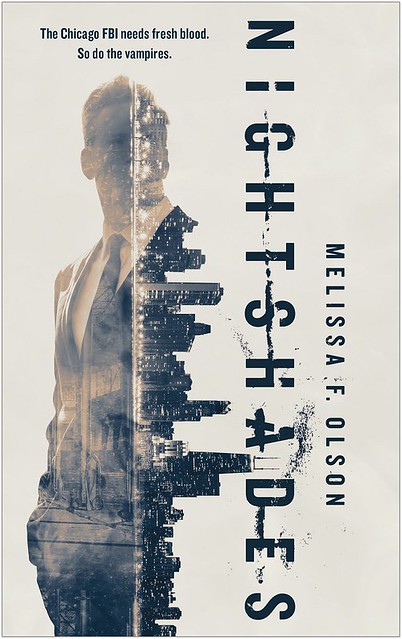 In today’s Big Idea, Melissa F. Olson considers vampires, not through the lens of sparkly teenagers, but through the one that involves waking, getting coffee, and going on with your life. How does that work, and how does it work in her novel Nightshades? Let’s find out.

When people learn that I write about vampires, they often assume that I myself wish to be a vampire, or believe them to be real. At the very least, they take it for granted that I of course must love vampires. All of those suppositions, however, are wrong. What I really love is a dark, exciting, preferably gothic, thought experiment.

That’s what the concept of vampires is to me, and you can blame Bram Stoker for that. I don’t love Dracula—by now, the Victorian techno-thriller is much too dated, to the point of being practically alien in its depictions of human behavior —but like so many others I am fascinated by it.  I think of Stoker as the Dan Brown of his day: a mediocre (at best) writer who stumbled on an idea that was so universally gripping that it achieved literary near-immortality just by its creation. Parasites are interesting. Immortality is interesting. Putting the two together? Practically irresistible.  Stoker may not have been a legendary writer, but he was savvy enough to recognize a legendary idea when he saw one.

Still, the fact that Stoker wasn’t the world’s greatest writer has had interesting repercussions. As Neil Gaiman put it in his introduction to Leslie Klinger’s annotated edition of Dracula, “I suspect the reasons why Dracula lives on, why it succeeds as art, why it lends itself to annotation and to elaboration are paradoxically because of its weaknesses as a novel.”

In other words, by creating a novel that lacks clarity of plot and mythology, Bram Stoker created a “what if” playground that many writers just can’t resist visiting.  What if there was a creature that never aged, and that fed on human blood? What would the creature look like? How would he interact with humans? What would he feel toward them? How would they react to him?

These questions correlate nicely with my own personal guiding principle of writing fantasy, the mantra I chant whenever the geeky part of my brain starts running off on what would be super cool. Okay, I say to myself, but how would this really work?

If vampires were real (and no, I don’t believe that they are), how would that actually work?

This thought experiment is where I have spent the last five years of my life, writing the Old World series for 47North. A few years ago, however, a new thought occurred to me: what if vampires were real…and nobody really cared?

Oh, they might care in theory, at least for a little while. But I really do believe that if the government captured a “live” vampire tomorrow, there would be a month of social media uproar, and then everyone would just go back to their lives.

Because, you see, that’s what we do. We find out that an earthquake has devastated a country on the other side of the world, or the Hugos are rigged or Donald Trump is running for president, and we have a brief period of outrage (which is like a period of mourning but with more Facebook feuds), and then we go back to putting one foot in front of the other. One day in front of the other. Until the next outrage erupts, and the cycle continues.

But not for everyone.

In Nightshades, a “shade” is a vampire-like creature with preternatural strength, a need for human blood, and saliva that causes intense hypnosis in humans. A few years before the book’s events, a shade was captured alive in Washington DC. There was a public panic, and the director of the FBI created an offshoot agency, the Bureau of Preternatural Investigations, in order to appease the frightened citizens.

A little time passed, no more shades surface, and the uproar began to die down. Most of the world’s population simply went back to their lives, while Congress struggled to determine whether the captured shade is considered a citizen or not. In short, we all absorbed the new normal and moved on.

Except for those government agents who suddenly find themselves dealing with a new species and an apathetic public. When a shade near Chicago starts aggressively kidnapping teenagers, those agents who have to figure out how to handle the crisis, even after everyone else has moved on to the next thing. And the understaffed, uninformed, and desperately overmatched Bureau of Preternatural Investigations has to figure out how to hand a brave new world that the general public would sooner pretend not to see.

Nightshades isn’t about a hidden world, and it isn’t about a well-oiled machine of an agency that can confidently address supernatural threats. It’s about the moments right after vampires are first discovered, and how the new agent in charge of Chicago has to think outside of the box to handle it. I wrote it not because I love vampires, or think they’re sparkly and romantic, but because, damn, I am still having a great time in Bram Stoker’s playground of what-ifs.