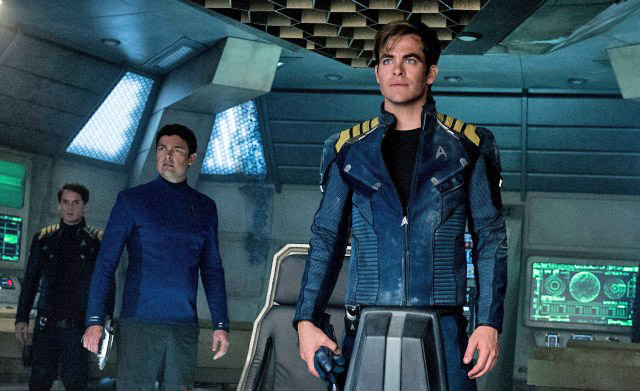 It was pretty decent! With the exit of Abrams, Kurtzman and Orci as director and screenwriters, respectively, the series appears to have made the executive decision that they don’t need to rehash previous plotlines. They’ve written a new one for this film, gave Simon Pegg co-screenwriting duties and let Justin Lin (previously of the Fast and Furious franchise) do his thing. And it works — the movie zooms, the script is good, and the nods to the previous timeline are brief and fitting. This is Star Trek Now, and it is good.

One complaint I do hear from longtime Trek fans is that the new Trek films don’t give enough lip service to Gene Roddenberry’s humanistic ethos, and I have a couple of thoughts on that. The first was that while that ethos was and is laudable, Roddenberry was as subtle about it as a sledgehammer, which is why TOS episodes sometimes now play like Very Special Episodes where learning happens (some TNG episodes play that way too, notably in the first couple of seasons). As a viewer I don’t actually want the Roddenberry Moral Sledgehammer. I’m not a child. The second is that as it happens Beyond is the Kelvin-era film that most overtly signals in the direction of that Trek ethos, both in what it says and what’s on screen. And for me it was the right amount — enough to know it’s there and important, not enough that you feel like you’re being lectured by a tiresome hippie uncle.

This is not a great film, or one that will held up as a highwater mark of science fiction cinema. But it is a zippy, fun time at a summer movie, competently and cleverly done, and in a summer of ponderous and ponderously long films, one that warps in, gets its business done in two hours and warps back out feels like a winner. It’s not the best Star Trek film (still Wrath of Khan), but it is the best third Star Trek film, handily beating Search for Spock and Star Trek: Insurrection by a far stretch. It also makes me excited that the next Star Trek film has already been greenlit. I like this cast and I like this version of Trek. I’ll be around for the next one.

43 thoughts on “A Brief Review of Star Trek Beyond”