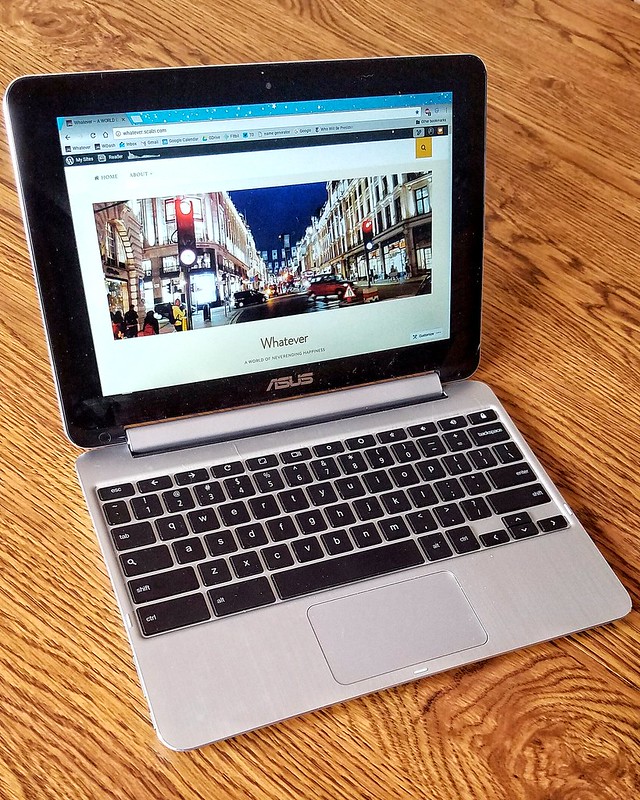 I am a nerd, and I have disposable income, and those two things mean that I end up buying a lot of technology. I buy some for utility and some just because it’s shiny and I have relatively few defenses against shiny. This has recently led me to consider, out of all the tech that I do have in my house and on my person, which represents the best actual value — that is, what tech do I have that I get the most out of, relative to the price I paid for it?

(Caveat: for the purposes of this exercise I’m considering objects for which the computing aspect is a significant percentage of its utility. Yes, a car and a refrigerator are technology (so are eyeglasses and pants), but I am going to go ahead and skip them out of the discussion. I think you’ll probably understand.)

Let me start with the things that have offered me the least real amount of value. First, I nominate my desktop computers, which are useful but generally spendy, since I have a tendency to make them gaming-capable behemoths and yet spend very little time gaming anymore. These behemoths are nice for photo editing, to be sure, but on balance I overspend relative to actual utility. I live in hope when I buy these rigs, and reality eventually crushes that hope.

Second, my iPad Mini, which is a very pretty and reasonably powerful bit of kit, but which I mostly bought because a videogame I’m helping to develop was initially coded for it, and I needed to be able to look at the thing during development. Beyond that I hardly ever use it, partly because I’m otherwise mostly in the Google ecosystem but also because among the tablets I have my Nexus 7 has the best form factor for me (so of course no one makes tablets with that form factor anymore).

Third, televisions. We have several in the house but I watch relatively little TV these days, mostly because of time constraints, and what TV I do watch I end up watching on computer/tablet/phone more than the TV screen. Now, I’ll note this is just me, since in the Scalzi household both Athena and Krissy watch more TV than I do, and on the TV rather than on other hardware. So for the family overall, there is value. But if I were living on my own (God forbid), it’s questionable whether I would own my own dedicated TV set.

Having cleared out the tech of questionable utility value, what tech do I have that I think on balance has offered me very good value?

First I would nominate my smartphone, which is essentially as powerful as my desktop computer a few iterations ago yet is tiny and goes with me everywhere, pretty much allows me access to all information anywhere, and even has a reasonably competent camera. Plus, from time to time, I can even make phone calls with it, if I want, and sometimes I still do (I mostly text now, though, like other civilized humans). What keeps the smartphone from having the best cost/utility ratio is the form factor, which makes it not useful for, say, writing long-form, which is a thing I do (just thinking of writing this piece on a phone fills me with dread, much less a whole novel), and also because frankly phones aren’t cheap — with hardware costs and carrier charges over the life of the phone added up, it’s a couple thousand dollars per phone. There are ways to brings the cost down, but I don’t do them, for solid (and a couple not-so-solid) reasons. But at the end of the day I live so much on my smartphone that its utility runs very close to its overall price.

Second I would nominate my digital SLRs. These cameras are soooo not cheap (alas!), and while I recently did start getting paid for photography (Tor.com and Locus magazine used some of my photos and compensated me for them, which of course they should have), I don’t have any plans to make it a serious part of my professional income. So the question of cost/value here is an interesting one. I nevertheless think I get excellent value from the cameras, but the value is intellectual and existential — taking pictures makes me happy, and working on those pictures after I taken them also gives me pleasure.

Photography is a hobby of mine, basically, and doing it offers me a consequence-free creative outlet, which as it turns out is important to me. I’m a proponent of monetizing the things you love, to be sure. But over time I’ve learned it’s also important to have creative outlets that are just play. It’s good for your mental health, and it’s beneficial for other aspects of your creativity. The cost of the cameras for me is compensated by what I get out of taking and playing with the photos, and that’s something that has value independent of the financial value of the tech.

With that said, the single piece of tech I have that I think has given me the best utility return on investment, hands down, is the Chromebook Flip I bought last year. It cost me $280 or so when I got it (the version I have, with the 4GB RAM, is now down to $250), and in return I’ve gotten a super-useful little laptop that does nearly everything I need it to do. I can write longform, I can flip it over and use it as a tablet during readings and presentations, I can do (basic) photo editing and other tasks, and now that it has access to Android apps, that’s another value add. Its size and battery life have made it useful for travel, to the point where it’s my go-to travel laptop (my Dell Win10 laptop stays at home unless I need to do a marathon Word session).

And to be blunt, if I drop it, or leave it somewhere, or it gets stolen? I’m out $280, it’s replaceable for less than that now, and all the data I use on it is stored elsewhere. I wouldn’t say its disposable, but I would feel rather less put out than I was a few years ago when I accidentally left my Mac Air at LaGuardia and it somehow magically made its way to Brooklyn and then dropped off the radar completely. That was expensive stupidity on my part. Losing the Chromebook Flip, while it would still be stupidity, is within my budget.

The Flip isn’t perfect (How to make it perfect, Asus, in case you were wondering: 1080p screen 11.6-inch screen and backlit keys on the slightly larger keyboard), but this entry isn’t about whether tech is perfect, but whether it offers value for cost. This purchase really has. I really don’t think I’ve been more satisfied, value-wise, with a tech purchase. Something, perhaps, for you to consider for your own future tech purposes.

59 thoughts on “Tech With Value”