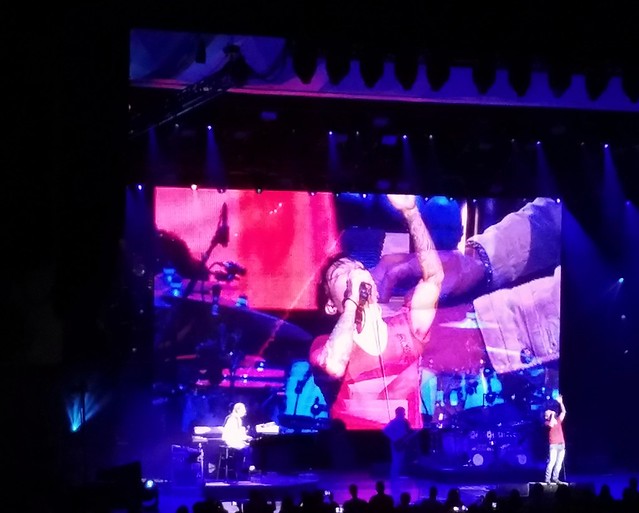 Most of you will recall that I have a soft spot for the band Journey, whose album Escape I adored insensibly when I was thirteen, and whose general Album Oriented Rock stylings are my musical equivalent to comfort food. I saw the band on the Raised on Radio tour back in high school, but since that time haven’t felt much of a need to see them in concert, in part because Steve Perry, their singer through their “classic” era, is no longer part of the band.

But this year the band offered up something nearly as good: Steve Smith, who was the drummer for the band during most of its classic era (but who was not on the kit for the Raised on Radio tour), was returning to tour with the band after more than 30 years. I’m a drummer (I have still have the trap set I got as a teenager in the basement) and I love Smith’s sound on the Journey albums. To have a chance to see him do his thing with these songs live was too much of a temptation. I got tickets.

And how was watching Steve Smith hit the skins on this tour? Very different than what I expected! Journey’s drum sound is massive, but Smith, who primarily plays jazz when he’s not thumping out rock hits, is not a hugely demonstrative drummer. His movements are precise and deceptively economical considering the amount of noise he makes. I understand of course that wild arm swinging does not necessarily correlate to big sound with drums, and that good miking and sound mixing can make even small drum hits sound as big as the sound guy wants them to be. But it still really was counter to my expectation. When I play a Journey song on drums, my arms are swinging everywhere. But then, I’m maybe 1/100th the drummer Steve Smith is. He is genuinely phenomenal.

(And, these days, has an unsettling resemblance to Ben Kingsley. Gandhi on the drums, everyone!)

The rest of the concert was perfectly good, and utterly unsurprising, which is in itself utterly unsurprising. The rest of the current iteration of the band (keyboardist Jonathan Cain, bassist Ross Valory, guitarist Neal Schon, and vocalist Arnel Pineda) have pretty much played the same set list, with minor variations, for a decade (and Cain, Valory and Schon, all classic-era members, for an additional decade before that). It’s difficult to imagine they all couldn’t do their standard show in their sleep. The band played the hits — nothing before Infinity, nothing after Raised on Radio — and the only song that could have been called a deep cut was “La Do Da” from Infinity, which mostly served as a scaffold for a Smith drum solo.

And that’s fine! Journey at this point understands its place in the universe as (charitably) the A-list of legacy bands, or (uncharitably) as its own best cover band. It’s here to give the people what they want, which is the track list of Journey’s Greatest Hits, give or take one or two bits. I mean, I would have been fine with more deep cuts, a track or two from Trial By Fire, and even the band’s first single with Arnel Pineda, the perfectly Journey-ish “Never Walk Away.” But if the band did too much of that for too long, they wouldn’t be playing music sheds that seat 20,000 people in their fifth decade of being a band. When you can make 20,000 middle-aged people deliriously happy for 90 minutes, you let me know. I’m not gonna fault them for that, or for knowing what side their bread is buttered on. At this point if you go into a Journey concert expecting anything other than a comforting nostalgia wallow, that’s really on you, not them.

I do have quibbles. One, Neal Schon surely does love his guitar solos, of which there could have been at least three fewer (and the ones that remained, better structured). Two, the sound quality of the concert was meh; Pineda suffered from bad miking at the start (it seemed to improve as it went along) but overall things were a smidge muddy. Three — well, no actually there is no three, just those two. I have no quibbles about Pineda, the sole performer on the stage who was not a member of the band’s classic era. He knows his role — to be the best damn Steve Perry he can be — and after close to a decade, no one holds it against him, if they ever did. I mean, everyone gets it, Perry doesn’t want the gig, so, fine. Here’s Pineda, with a fantastic set of pipes, delivering the goods and looking like he’s having a ball doing it. Good for him. Good for the fans.

Also on the bill: Dave Mason, who seemed pleasantly happy to be the warm-up act, and the Doobie Brothers — with two founding Doobies! — who I enjoyed as much as I expected to, so that’s good.

In all, a perfectly lovely date night for me and the missus with thousands of other people who also graduated high school in the 80s. A+++, would recommend.