I write funny things professionally, and have done for years. I’ve made a fair amount of money and even won some awards for funny things I’ve written. So as a professional writer of funny things I have thoughts on Donald Trump’s oblique joke yesterday about how great it would be if a gun nut assassinated Hillary Clinton and/or some of the judges she might appoint. As with many examinations of humor, this will not be particularly funny. You have been warned. 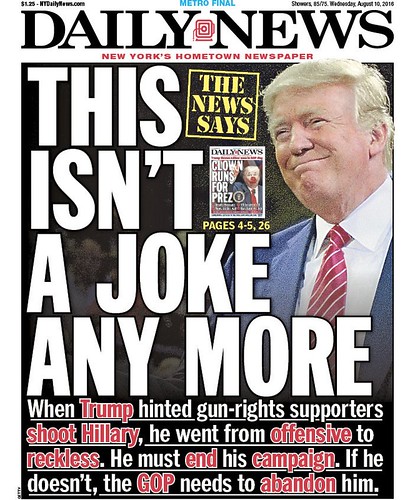 1. Of course Trump’s comment was a joke, and as someone who has told more than his share of inappropriate jokes to his later regret, I’m pretty sure I can model Trump’s brain process to getting there. He’s up on stage, he’s pissed off that he’s losing, he’s with a sympathetic crowd that wants him to say something punchy, and he has no goddamn filter at all, because why would he, his brand is “I say what I think” and his brand has gotten him this far. So out of the woodwork of his brain comes the clever observation that well, actually, some jackass with a gun could offer up a lead veto to Clinton and/or her judges, and out it went through his teeth. Trump didn’t give it any more thought than that: pop! into his head, push! out of his mouth. Maybe three tenths of a second from conception to utterance, if that. This is was not a statement he’d been consciously planning months to say.

Was it a joke? Sure. Was it funny? Like most jokes, it depends on whether you’re the audience for it. It didn’t work for me. Should Trump have said it? Immaterial, since it was said.

Should it be excused as “just a joke”?

Well, but, see. Here’s the thing about that: There’s no such thing as “just a joke,” and Trump of all people knows that.

So here’s the context of that joke: Donald Trump is a man who has pursued the presidency through racism and white nationalism and by insinuating criminal activity on the part of his opponents (or their families), who has encouraged foreign agents to subvert the US election process (another “joke”) and who is actively training his base of support — angry and scared white people, many of whom have a nearly-fanatical attachment to their firearms — to consider the election process rigged if it does not produce the result they want. Then, at a political rally, as the GOP candidate for president, while speaking about the 2nd Amendment and arguing how his opponent Hillary Clinton wants to get rid of it — to get rid of his angry white supporter’s firearms! — he drops a little joke about how, well, actually, they could oppose her, nod nod, wink wink.

Trump wasn’t making a private joke with friends in the comfort of his own ridiculously baroque home. He wasn’t writing satire (which is often not funny) or black humor in the pages of, say, the New Yorker. He wasn’t on the stage of a comedy club trying out five minutes of edgy new material in front of a half-drunk midnight crowd who are there to see someone else anyway. He wasn’t putting it in the comments of his liberal friend’s Facebook post about gun control. He wasn’t doing any of those things — although even if he were, he could still be held accountable for his words. Rather, he was, as the GOP candidate for president, at a rally of his supporters, in a race he is currently far behind in, joking about someone killing off Hillary Clinton, or whomever she appoints as a judge. He wasn’t there to make comedy. He was there, quite literally, as a political statement. That’s the context.

3. What, politicians can’t make jokes? Well, speaking professionally, it’s usually better when they don’t. They can’t all be Ann Richards. Every time Hillary Clinton attempts humor my desire to vote for her goes down a tenth of a percent. I don’t want or need my politicians to be funny. I need them to wonk out on unsexy topics like water rights and trade deals, and represent the interests of their constituencies. That’s the gig, not killing it for ten minutes at The Comedy Store.

That said, sure, if politicians can make jokes, why not? Yuk away. But again, jokes aren’t Get Out of Jail Free cards for saying horrible things. And when the jokes are, in fact, saying horrible things, like when the GOP candidate for president pops one off about maybe someone assassinating the Democratic candidate for president because of her alleged position on the 2nd Amendment, it’s all right to haul the joke out into the light and begin the utterly unfunny process of picking it apart to see what’s really going on there.

Why can’t you just let a joke be a joke? Because, to repeat, and as others have noted, it’s never just a joke. Jokes mean things, just like any other kind of speech. In fact, jokes often have greater impact, because jokes aim for the pleasure centers of our brain, not the analytical centers. The information of a joke hits in a place where you have fewer defenses against it, and fewer walls barring it from sinking into your overall worldview. This is why, among other things, you probably laugh at things you know you shouldn’t laugh at. It’s also why you’re probably quicker to excuse the content of a joke — it’s just a joke! — or to minimize the importance of what’s being said within one. How bad can it be if it made me laugh? And also, if the joke is saying something horrible, what does it say about me? You have a vested interest either way in explaining away your reaction.

Trump is not a great politician — indeed, if this election cycle has done anything, it has reminded us that the oft-derided skills of being a great politician are in fact useful and needed — but he is a marvelous bully, and like any gifted bully, he’s aware of how to use humor for its manipulative qualities. This is why he mocks his opponents and gives them silly names, why he says outrageous things, planned or unprompted and then immediately wraps them in the rhetoric of humor, and why all his defenders are instructed and prompted to explain away the jokes. He’s not the problem, you’re the problem if you can’t take a joke. No one wants to be accused of not being able to take a joke.

4. This is where once again I put on my hat as a writer of funny things to tell you the following:

Finally and perhaps most importantly:

Why? Because, well, why are they saying that? Sometimes it’s because the person is a comedian, trying to convince you they’re funny (pro tip: if you have to convince someone you’re funny, you’re probably not funny to them). Sometimes the person who told the joke realizes they just stepped in it, and is trying to backtrack without making themselves look too much like an asshole. Sometimes the person is gaslighting you, trying to make you doubt yourself, for their own purposes. And sometimes that person is trying to normalize hateful rhetoric — or keep hateful rhetoric normalized — and is trying to make you defensive about seeing it clearly as what it is: hateful.

Laughing at a horrible joke is not the problem. Excusing that hateful and horrible joke as “just a joke” is the problem. The pleasure of humor don’t mitigate the damage it can do when the hate it offers slips into someone’s worldview, or simply reconfirms the hate they already hold. You’re not automatically a bad person if you laugh along with hate. You’re a bad person if you walk along with it. Humor makes it easy to take that walk. It’s up to you to resist moving your feet. The more you resist, the more you’ll recognize that hate actually isn’t all that funny.

6. Trump made a joke about someone assassinating his political opponent, or the judges she might appoint. Trump’s minions and enablers have been scurrying around trying to spin it, or mitigate it, or accuse people of misunderstanding it and anyway it was just a throwaway line, it was just a joke. But context matters and who is making the joke matters. Trump is a bigot and he’s ignorant and he is a buffoon and he has no filter but he is not stupid. He knows when he puts things out into the air that they are heard and that they are taken seriously. Even the jokes. Especially the jokes.

Trump wished out loud that someone would assassinate Hillary Clinton because inside, the screaming tantrum-throwing infant that Trump is wants her out of the way, and so does the slightly more grown-up version of him whose business model includes cheating contractors and workers out of their contractually-obliged fees and wages, and so does the 70-year-old version who has spent decades getting his way, who wiped the floor with the laughable opposition he had in the GOP primaries and sees no reason why he should do anything different than before, and is possibly confused as to why it’s not working any more, so just try harder. Does Trump actively want Clinton dead? No. But out of the way covers a whole lot of ground. Trump is a bully and he knows how to phrase a wish. So when that wish came howling out of his id up there on stage yesterday, he wrapped it into a joke and sent it on its way.

As should this: When Donald Trump is president, he won’t have to make jokes anymore.