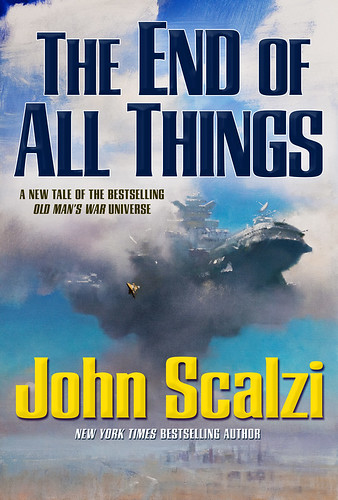 Earlier in the year DragonCon announced they would inaugurate the Dragon Awards, a fan-voted award covering science fiction and fantasy literature, games and media. Last night, the list of nominees was sent out to people who had signed up to nominate and vote for the awards (you can see the full list here) and it turns out that The End of All Things is a nominee in the category of Best Military Science Fiction or Fantasy Novel.

I have two thoughts on that:

1. Awesome! I’m thrilled to be nominated and happy enough fans liked the book enough to make it a finalist in this, the inaugural year of the award. That’s very cool, and I am, of course, deeply honored.

2. I have emailed the folks at the Dragon Awards via their Web site requesting to decline the nomination, because as I said in November, I’ve decided to withdraw my 2015 work from award consideration, and The End of All Things was originally published in 2015.

As the Dragon Awards are a new award, I don’t know what their policies are for withdrawing a finalist work; it may be that it’s not possible. If that turns out to be the case, this is me saying I hope those of you who vote for the Dragon Award in that category will consider the other eminently worthy finalist works and authors. There’s good stuff to choose from.

I want to stress that this request for withdrawal should not be construed as an intended slight toward the Dragon Awards — I made my policy about my 2015 works before the Dragon Awards even formally existed. In another year, with another work, I’d be happy to be nominated again for this award. I hope the Dragon Awards are successful this year and enjoy a long run highlighting excellent works in the genre.

To all the other people and works on the finalist lists: Congratulations and the best of luck to you! And to fans: If you’d like to vote for the other finalists for the Dragon Awards, in any category, here’s the link to the award’s home page, where you can sign up to vote. Enjoy!

← Trump, and His Jokes, and You
Midnight Star: Renegade is Out! →