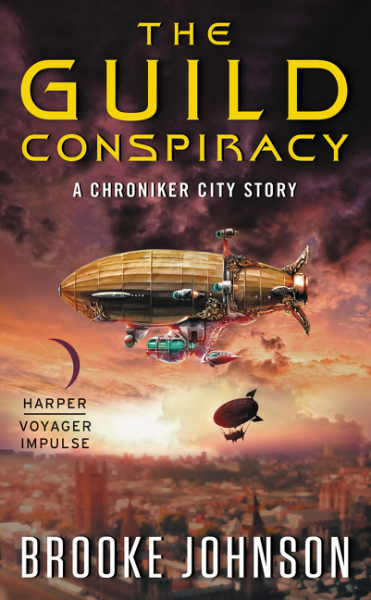 To finish up your week, here’s Brooke Johnson to tell you about her new novel The Guild Conspiracy, and how, sometimes, you have to fall to rise again.

When I was writing the first draft of The Brass Giant back in 2011, I thought it was going to be a standalone novel, a nice and neat, one and done foray into the steampunk genre, and then I’d move on to other things. It wasn’t until I got about three-quarters of the way through my outline before I realized that the story I was writing was much bigger than one single book could tell. For the story to be over, my main character would have to emerge victorious against a villain she didn’t yet know existed, against a plot far more sinister than she yet realized. The closer I got to the end, I had to start asking myself the hard questions: How could a naïve teenage girl topple a conspiracy she hadn’t yet discovered? How could she emerge victorious?

The simplest answer? She couldn’t.

So, at the end of The Brass Giant, Petra fails. Horribly.

That was the story I wanted to explore. I just never realized how deeply personal it would become.

Failure is not something we accept easily—especially those of us who do creative work. To fail at something we poured our souls into… it’s scary.

I tried several times to write this book over the last five years, but I never made it more than halfway through a first draft. I was terrified of getting it wrong, of writing something unworthy of the hypothetical paper it might be printed on. I was afraid that whatever meager talent I had poured into the first book was spent and I’d never write another book for the rest of my life. I wondered if I was wasting my time trying. And then other things came up in my life that forced me to stop working on it—an excuse to never discover if my fears were warranted or not, a streak of bad timing that I started to call a curse. I wanted to write this book—I really did—but I was afraid of it. I was afraid of failure. So I abandoned it, hoping I might one day have the courage to try again.

Fast forward to early 2015, months away from The Brass Giant’s traditional debut, and that fear of failure manifested all over again. But not about the impending book release. I was nervous, sure, but I was confident in what I had done with The Brass Giant under the tutelage of Harper Voyager’s editing team, and I was fairly optimistic about how the book would be received.

What scared me was the fact that my contract with Harper Voyager wasn’t for just one book. It was for three. Which meant that I needed to write the sequel. For real, this time.

So I did what any sane person would do: I took my fear of failure and poured it into the book. If  I could write a character moving past her own failures, then maybe I could get over the fear of mine.

So The Guild Conspiracy is about overcoming that failure, with the main character at her worst, a victim of her own hubris, her own naivety. It’s about starting the fight all over again, striking out on an uphill battle despite every last odd being pitted against her. It’s about mistakes and bad choices and trying desperately to make things right, about recognizing when she’s wrong, recognizing her own weaknesses, and trying to do better.

That all came from a place of personal truth, a place of fear and uncertainty in my own career. But like Petra, I was able to face my fears and forge a path ahead, despite not knowing where the journey would take me. Sometimes, that’s all we can do.