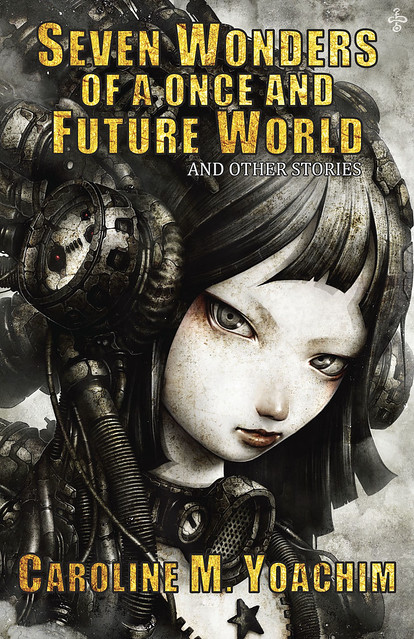 In the writing and collecting of the stories which comprise Seven Wonders of a Once and Future World, author Caroline M. Yoachim discovered the thread that runs through them. What’s the thread and how does it weave into each of the tales? Yoachim is here to explain.

When I was putting together Seven Wonders of a Once and Future World & Other Stories, I noticed something about my short fiction: I write a lot of stories about brains. Not so much the neurons inside our skulls (although there’s certainly some of that), but an examination of what our brains do–the nuances of consciousness, the nature of the human mind.

In Philosophy there’s a thought experiment called Theseus’ paradox that asks: If you replace the boards of a ship one at a time until every board has been replaced, is it still the same ship? It’s a fascinating question because it gets at the nature of identity. What makes something the same ship–are the individual boards important? Does the rate at which boards are replaced matter?

It’s a fun problem to think about in the context of ships, but where it gets really interesting for me is when the thought experiment is applied to people. If a person replaces their body bit by bit, until every cell has been replaced, are they still the same person?

I love writing short stories because you can explore an idea from lots of different angles. What is the nature of human identity? There’s no simple answer to that, so my goal has been to revisit the question in a variety of ways. With science fiction I can deal explicitly with Theseus’ paradox. Several of my stories involve characters whose bodies are replaced, either entirely or only partially. In other stories, my characters abandon their biological bodies entirely or merge their minds into a collective consciousness. At what point do we draw the line and say ‘this is no longer the same person’ or even ‘this is no longer a human at all’?

I draw a lot of inspiration from my academic background in Developmental Psychology. Infants and young children change rapidly as they learn new skills and gain a better understanding of the world around them. I don’t have much in common with my 3-year-old self–the way I think about the world is different, I’m a different size, a different shape. Over the years, most of my cells have been replaced. But despite all that there is a continuity to my existence: all these changes have been gradual, so from one day to the next I am the largely the same person. Three-year-old me was similar to 4-year-old me, 4-year-old me was similar to 5-year-old me, and so on for over three decades…a continuous chain leading up to the version of me that is writing this essay–an essay that my 3-year-old self wouldn’t have been able to read or understand.

In my short stories I try to capture this interplay between continuity and change. When I’m writing fantasy, I often make my characters undergo drastic transformations–a girl made of bamboo rebuilds herself with driftwood, a sugar clown is dissolved in a cauldron and regrown from a seed crystal, a Lovecraftian fish-frog mermaid becomes a beautiful human. Writing about these kinds of transformations has been another way for me to explore what is (and isn’t) important to who we are.

The nature of identity is something that’s important to me on a personal level, too. I’m mixed race, and that’s an aspect of my identity that I’ve struggled with for a long time. Being half Japanese and half white I don’t feel like I fully belong to either group. There’s a degree to which I’m constantly reconstructing my identity, like a chameleon trying to blend in with its surroundings. I wrote a fantasy novelette, original to the collection, that tries to capture my longing to find the place where I fit. “On the Pages of a Sketchbook Universe” is set in a fantasy world where some people are made of watercolor paint and others are made out of pencils. I wanted to write a story that examines what happens when someone falls between those two categories, a character who is a blend of both pencils and paint.

I didn’t initially set out to write a themed collection, but the nature of identity is an idea that I return to again and again, often with more questions than answers: What makes us who we are? Is there some essential core that defines us as individuals? How much of ourselves can we replace before we become something entirely new?

Seven Wonders of a Once and Future World: Amazon|Barnes & Noble|Indiebound|Powell’s