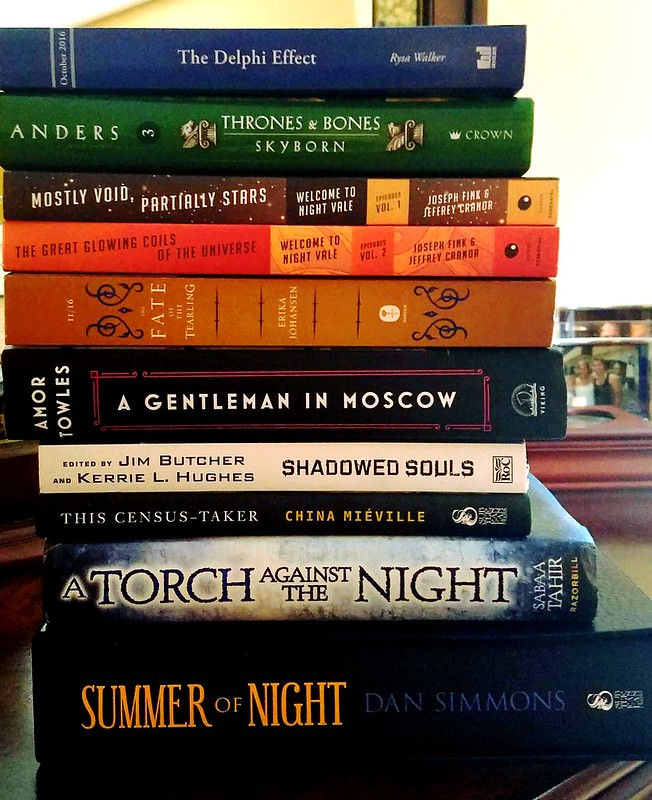 Feast your eyes on these new books and ARCs that have come to the Scalzi Compound in the last couple of weeks. Anything here you’d like to dig into? Tell us in the comments.

Also, starting tomorrow I’ll be at MidAmeriCon II, this year’s Worldcon. Here’s my schedule there. If you’ll be there, come see me! If you’re not there, I probably won’t update here until Monday, although I am likely to be on Twitter off and on over the next several days. Either way, have a fabulous second half of your week. Catch you later! 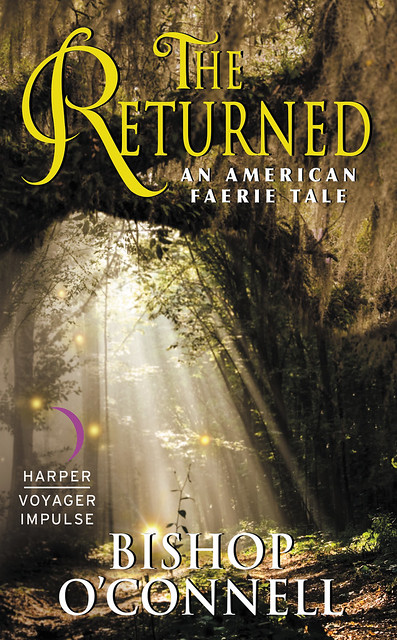 What’s in a place? For The Returned, and its author Bishop O’Connell, quite a lot, indeed.

Location as a character.

I travel a lot for my day job and because the jobs tend to be longer term, I get a chance to explore new towns all over the country. There’s something special about that moment when you’re no longer a tourist—though not really a local—and you get to see the real magic of a place. You learn the history, get to know the people, and really, truly get to experience the city. The city, while maybe not “your” city, becomes something more; it almost becomes a person. You see the city for all it is, the good, the bad, and the ugly. But hopefully, it’s a place where the complexity and contradictions add to the beauty of it. This is something I worked hard to include in all the books of my American Faerie Tale series. The location of every book wasn’t just randomly chosen. Each was a place I felt I knew well enough to bring it to life on the page and give readers a sense of its complicated beauty.

The Stolen was set in and around Boston. Yes, the book is heavy on Irish myth and legend, which made Boston a perfect choice, but I wanted more than that. The city is old, and has a long history, on both sides of the Revolutionary war. Moreover, the layout of the city hasn’t changed much in that time, which I’m told is one of the reasons traffic is so bad in the city. And it is bad. Really bad. So bad in fact that I invented a magical means of travel to deal with it. For the book I mean, not in real life…or do I?

The second book, The Forgotten, takes places mostly in Seattle. One of the main characters in the book is a homeless teen, and Seattle, unfortunately, has more than its share. However, and to its credit, it’s also one of the better cities helping their homeless kids. I love that it’s called The Emerald City—because of the greenery—but I like to imagine maybe it’s a destination for the hopeful trying to find home. The underground (the original ground floor of the city before it sank) plays an important part in the story, as does one of my favorite fixtures in the city: The Freemont Troll. The troll is a massive concrete sculpture under a bridge, but I write faerie tales, so he’s a real troll in my book. Three Promises, book three (I call it book 2.5) is a short story collection and has pieces in both Seattle and Boston.

For The Returned, I knew the city I wanted to use even before I started writing: New Orleans. I love New Orleans, as long as it isn’t August. Or July. Or, well, summer. The city has a long and storied history. It’s seen oppression, tragedy, violence, disasters (natural and man-made), poverty, injustice, pain, and grief. But the city has a visceral joy to it, a love of life you don’t see in many other places. Maybe all the tragedy has taught New Orleanians (Yats) to appreciate life, or maybe they live so fully to spite all the pain and heartache. I don’t know, and I imagine you’ll get different answers if you ask. Everyone knows about the amazing food and drink you’ll find, but there is so much more. The French Quarter is a tourist haven—locals go to Frenchman Street for live music—but because of the tourists, the street performers gather there, and they are impressive. You’ll find magicians, jugglers, performance artists of all sorts, and musicians. The musicians are incredible. The music you hear for free as you walk the quarter is often better than you’ll pay to listen to in other cities. New Orleans has passion, and life.

Which is what makes their strong connection to death so ironic. New Orleans funerals are a thing to see. The procession to the cemetery is a somber dirge, expressing the grief of the family. But once people have said their goodbyes, the music changes tempo. The belief being that the happiness and joy will release the spirit of the deceased to move on. Then of course there are zombies. No, these aren’t the shuffling, moaning corpses with a penchant for brains that have become so popular. This is the original mythology, imported from Haiti. Zombies have been done to death (ba-dum, ching) in their current pop culture form, so what better place than New Orleans to resurrect (last one, I promise) the old stories? There’s also voodoo/vodun, which just about everyone knows about (albeit a TV/Movie version). But not many people know that New Orleans (and Louisiana) has stories of rougarou, the Acadian version of the French loupgarou, as in werewolves.

Excellent food, a love of drink (the Irish in me approves), great music everywhere you turn (including funerals), plus zombies, voodoo, and werewolves? AND you get all the people of the city, a huge cast of potential characters to choose from. How do you not write a story set here?

Sure, the location can provide ambiance, and potential characters, but it also gives my characters a new way to shine. Like any good character should, the location pushes my existing characters. It drops them in new and unfamiliar situations, forcing them to grow and learn, to find the familiar and build on that, or fail miserably (which they sometimes do). Perhaps most importantly though, I find that using locations as characters shows the inherent connection between us all; Red Sox and Yankees fans notwithstanding. It gives the reader another way to connect with the story, another way in.