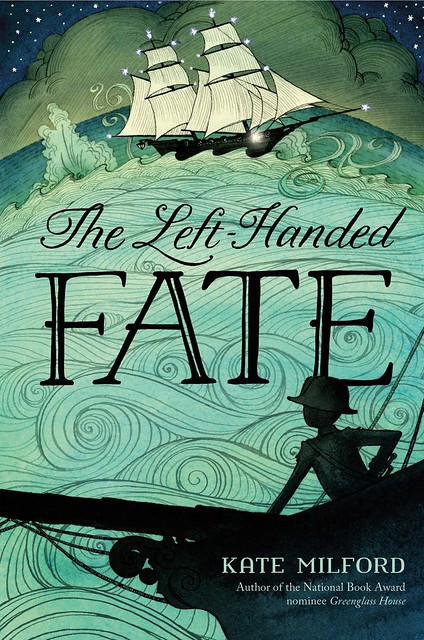 The War of 1812 is back! Sort of! In The Left-Handed Fate, author Kate Milford uses that little-remembered war as a backdrop for her story, and her musings on the nature of justice, particularly from the perspective of younger readers.

Writing about war for kids is difficult, and probably every book that attempts it is difficult in its own unique way. My newest book, The Left-Handed Fate, launches today. It’s a nautical fantasy set during the War of 1812, a time period I chose because it made sense for what I wanted to do (write a fantasy with ships in an era when kids in nautical families could go to sea and get up to adventures at very young ages), not because I was super-excited about writing a story about war. I knew that tackling the realities of children in wartime was going to be a challenge, but in the end it wasn’t a matter of the violence, or the convoluted economics and politics that kept Europe and the Americas at war for decades that made it so. It was the problem of treason and justice.

Kids have finely calibrated senses of justice. It’s one of the ways in which they make sense of the world, society, relationships, and basic interactions. Fairness is one of the laws of the universe–until, of course, they learn that it totally isn’t a law of anything. They also have sensitive rightness meters–another apparent law of the universe when you’re small is that in any altercation between two parties, there will be one party who’s right, and one party who’s wrong. These two beliefs–the belief that in most situations there’s a right side and a wrong side, and that fairness and justice should determine which side is which–persist to some degree or another throughout adolescence and sometimes deep into adulthood. And there’s a third thing that kids believe that sometimes they don’t grow out of quickly enough: the idea of being at the center of things. When you’re a kid, the most natural thing to assume is that that things are about you, or sometimes about things you identify with.

The biggest challenge of this book was to overturn those three basic, world-defining beliefs of childhood in a way that would still tell a satisfying story to a young reader. Because I have been in enough schools and discussed enough books with enough kids to have heard some variation of, “I understand why it had to be that way, but I didn’t like it” a million times. And in the end, while I think it’s nice to wind up with a book that has Something To Say To Young Audiences, mainly I want my readers to fall in love with the characters and their stories. I want them to love the story I tell. If it makes them think and challenges their worldviews, cool. But I want them to want to share it with their friends.

In LHF, I have three point-of-view characters: a British privateer and the also-British natural philosopher that hired her ship to help him build a weapon, and an American midshipman who’s made prize-captain when the privateer is captured. The entire story depends on the American kid deciding to help his enemies, who are mostly concerned with their ongoing war with the French and not about the conflict with America at all. This despite the fact that America was completely justified in declaring war in 1812. Our grievances were real. The American kid could be forgiven for feeling pretty confident that his side was right and Britain was wrong. And yet, I needed to have him come to the realization that the right choice was to side, for this particular adventure, with his enemies. To decide to risk court-martial and maybe death, but certainly to ruin his barely-begun career in the process.

All of this is a problem because it’s not fair, and because it’s hard to argue with the idea that, in this particular conflict, the American kid’s side is the right side. So my difficulty was how to get across to my readership of mostly elementary- and middle-school kids that frequently there’s more than one right side, that often “fair” is meaningless, and that sometimes even when you’re in the right and justice dictates that you should get your way, sometimes there’s a bigger picture that renders all of that irrelevant. That sometimes it’s not about you.

It was helpful that France at the time had some seriously bad stuff going on. It wasn’t hard to paint the Revolutionary generals and later Napoleon as monstrous and make France the greater evil to justify the American kid’s choices, and there’s some pretty dark moments as the privateer and the philosopher work to convince their captor that even though France is technically an American ally, defeating Napoleon should be everyone’s highest priority. (My editor really wanted me to keep the body count low until I wound up having a character talk about his time fighting in the Vendee during a civil war that killed hundreds of thousands even before the Reign of Terror. I think after that she sort of threw up her hands and gave up.)

But the thing that makes the era of constant warfare that includes both the French Revolution and the Napoleonic Wars relevant today is, I think, the insane nationalism and xenophobia that characterized all sides of these conflicts. So although I needed Bonaparte to represent a kind of offstage megavillain, I really wanted to avoid any dangerous oversimplifications that involved painting the entire country as the enemy. There are too many adults today that can’t wrap their heads around the concept that it’s possible you can’t identify people as evil simply by virtue of nationality; I didn’t want to support the idea that geography makes enemies in a book aimed at kids.

Fortunately, kids can handle both darkness and complexity, which is good because the ultimate solutions to my story problems required both acknowledging the intricacies of the various wars at the time and acknowledging the sometimes very frightening events that made the stakes so high on all sides.

But the truth is, it’s hard to ruffle kids in my target age range. Generally, when I go into schools and talk about my work, neither the convoluted politics nor the occasional carnage shock them. What does throw them for a major loop is being told that the United States fought a war that wasn’t particularly important in the global scheme of things, which it didn’t technically win, and in which it got convincingly trounced by Canada. That messes with them.