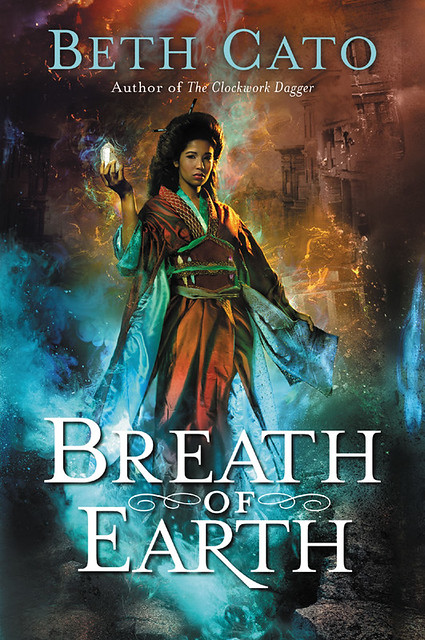 The Earth trembles as Beth Cato appears to talk about her new novel, Breath of Earth! No, seriously, it’s got earthquakes in it — and they’re a big part of the story.

As a native Californian, it’s only right that one of my earliest memories is of an earthquake.

I was three-years-old when a devastating earthquake struck Coalinga, about 45-minutes away from my home. As luck would have it, I was in the bathtub. I carry a profound memory of terror as water began to slosh sideways out of the tub without me even moving. I screamed. My mom scooped me up to save me.

A few days later, we drove out to Coalinga to view the destruction firsthand. We weren’t simply playing tourist; my mom used to live there, and my grandparents were driving away from a visit to the town when the quake struck. We saw street after street of buildings with walls sloughed away, exposing the interiors like dollhouses. It was horrible (especially for my mom), but I found it fascinating.

I grew up practicing earthquake drills in school. At home, I learned that if I suspected an earthquake was happening, I should look to the ceiling lamps to see if they swayed. That’s how my family verified that we felt an earthquake in October 1989. We soon found out that the epicenter was in San Francisco, a solid three-hour drive away.

Therefore, it only feels right that my first novel set in California is all about earthquakes. My heroine, Ingrid, is a secretary who is secretly a powerful geomancer. She lives in a world with a vastly different history than ours: the American Civil War ended early due to a Union partnership with the airship-powered might of Japan. They formed an alliance called the Unified Pacific, and as my book opens in April 1906, their combined forces are at war with China.

For Ingrid, earthquakes are not something to fear; they are something to harvest. Geomancers pull in the energy of the earth before it can damage buildings or people. They act as a buffer—but at a cost. Human bodies take in earth magic as heat, and in a major earthquake, the fever can overcome them in minutes. They stay alive by breaking contact with the ground or by immediately transferring the energy to a rare crystal called kermanite. Charged kermanite is what powers autocars, flashlights, even airships. Geomancers are the source of economic and military prosperity.

Women aren’t supposed to inherit geomancy, and Ingrid’s capacity to hold and wield energy is unlike that of anyone else. She is a woman of color, possessing a skill that she dare not reveal, and she bristles at her subservient place in society. She is privately delighted when earthquakes happen–those are brief moments when she knows she is her true, powerful self.

There is a lot of symbolism built into Ingrid and her relationship with both her own power and society at large, but for me there is some personal wish fulfillment there, too. Ingrid can stop earthquakes before damage occurs.

During my childhood in California, I didn’t live in terror of earthquakes as some people do, but I was keenly aware of their destructive might. I had seen it with my own eyes, at a very early age. I still pay attention to the occasional sensational headlines about when the next “Big One” will occur. I worry about my family in my hometown of Hanford, and friends who live across the state.

For all of our modern knowledge of earth science, earthquakes are still a mystical, wild force. For me, the desire to form a magic system, to make earthquakes a controllable entity, doesn’t feel like a stretch of the imagination. It’s something that I wish were real so that I could keep my own loved ones safe.