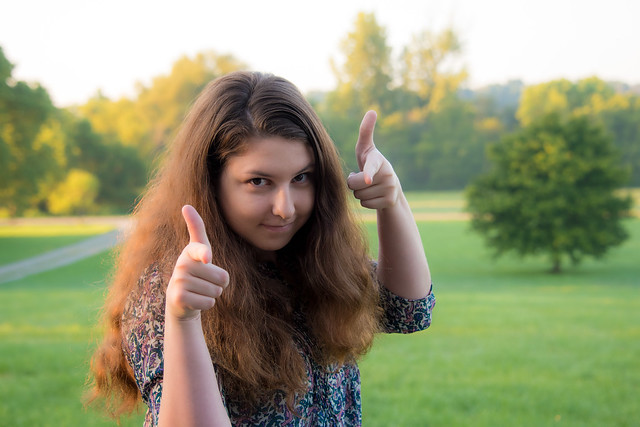 And Athena is ready for it!

This is Athena’s senior year, and this year she’s doing something a little different; basically, having exhausted the possibilities of her lovely but very small local rural high school, this year Athena is taking classes at the local community college. She’ll be getting credit toward her high school graduation and also, as I understand it, getting transferable credits for whatever four year college she attends next year. Or something, I’m honestly not 100% clear on this. But, the point is: She’s a senior, she’s off to her first day of classes today. Thus begins another school year. Indeed, her final school year before college.

I’ve been doing these “first day of school” pictures since Athena’s first day of school in the first grade (see below), with a couple of years missed when I was off on a tour (we also missed the first day picture for Athena’s second grade year, on account she was at Disneyland that day; I think it’s a good excuse). It’s a little odd to think that this is the last one I’m likely to do — I’m very unlikely to be there on her first day of classes for college, and I think we all agree this is probably a good thing. I wouldn’t call the moment bittersweet, since time passing is a thing and that’s all right. But it is a reminder that time does pass, and that just as there is a first time for everything, there is also a last. One chapter of Athena’s life, and ours, is coming to an end this school year. Time to get ready for the next chapters. I think they’ll read just as well. I’m excited to get to them.