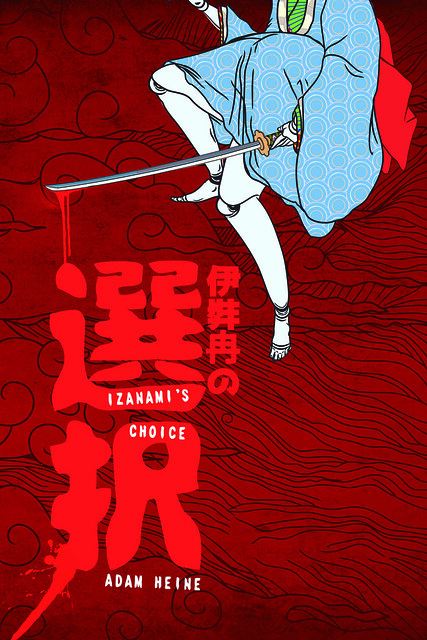 For the first Big Idea of September, author Adam Heine talks about Izanami’s Choice, and how, while “cool” is cool, ultimately it’s not quite enough for a great story.

Oh, I had other ideas I wanted to explore in this story – free will, messing with Three Laws tropes, fear and its role in the greater good – but the truth is that this story started out as “What if Meiji Era Japan had androids instead of guns and there were robots fighting samurai and also a detective and a murder mystery and wouldn’t that be so cool!”

But as much as I swear by the Rule of Cool, relying on that by itself would lead to a weak world, a dull plot, and – if I wasn’t careful – the appropriation and disrespect of an entire culture. I… don’t enjoy writing stories like that.

In order to make this work, I needed artificial intelligence in the 19th century. Gibson and Sterling provided a template for that in The Difference Engine, in which Babbage had succeeded in creating his difference engine, inventing computers a good century before we did. I took that even further. What if Babbage kept improving upon it? What if he collaborated with Darwin on ideas of evolutionary computation? What if logicians of the time codified reasoning as mathematical deduction, and formalized concepts we know under the Church-Turing Thesis? What if – by evaluating competing programs and designs against each other, by revising them at an accelerated rate with advanced analytical engines – 20th-century technologies and even artificial intelligence were invented before their time?

And what if someone created a machine intelligent enough to evaluate and revise its own designs? You’d have the beginnings of a robotic singularity.

Meanwhile (and true to actual history), Commodore Perry shows up in Edo Bay, forcing an end to Japan’s isolationism and catalyzing the events that would lead to the Fall of Edo, the end of the samurai class, and the rise of the Meiji Restoration. But in this world, instead of sparking an industrial revolution, imported Western technology sparks a cybernetic one.

I had a world. Now what about the story? I figured, since I had a nation in love with robots, I should focus on someone who despised them. Shimada Itaru is a former samurai who grew up when the shogunate fell, who was a skilled swordsman when the government made it illegal to carry swords (androids made weaponized humans obsolete, after all), who fought against the androids – and lost everything – in the failed Satsuma Rebellion.

When the Satsuma samurai fell, Itaru didn’t surrender or commit seppuku like most of his kin. He ran. He hid. He forged a new life for himself, despising the droids who’d stripped his sword, his honor, and his country from him. When his son was later killed as the result of an android malfunction, Itaru’s enmity turned into outright loathing.

I put Itaru in a situation where he had to work alongside an android in order to get his life back, and bam. Story.

How to respect history and culture? That will always be an ongoing process, one in which I’m sure I will make mistakes (and God-willing, learn from them). But the main thing I know is this: damn well get it right. I spent a crapload of time – more time than I spent actually writing the book, I think – studying Meiji Era Japan, reading Mikiso Hane and James Clavell, researching historical Tokyo wards, scrolling through hundreds and hundreds of pictures circa 1900, and more. Any mistakes in the book are a result of my humanity, not carelessness.

I still worked in a folding sword, though. Physics shmysics, man, those things are cool.

← And Now To Close Out August 2016, Please Accept These Pictures of Two Delightful Hummingbirds
5 Writing the Other Fails And How To Avoid Them: A Guest Post →