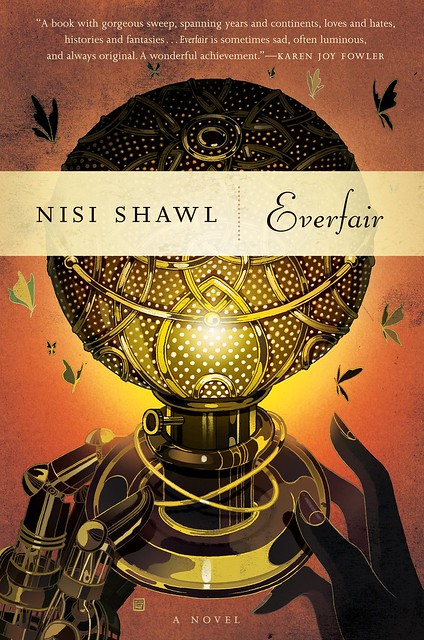 Nisi Shawl’s novel, Everfair, began as a bit of dare — a fine reason for a story to exist. But as Shawl details below, it’s not enough to write something for the challenge… because sooner or later, you’ll need people to want to read that story, too.

I want to subvert your mind. In a good way.

The impetus for writing Everfair came out of a 2009 World Fantasy Convention panel I was drafted onto. The topic was steampunk; the other participants were Liz Gorinsky, Ann VanderMeer, Michael Swanwick, and Deborah Biancotti. What I didn’t understand going into the panel was why, with my love of Victorian literature and my self-admitted gear kink, I didn’t groove heavily on this genre? The answer I discovered and propounded to the audience: disgust caused by steampunk’s cozy relationship with colonialism. Enough with the be-goggled pith helmets and offscreen resource extraction already, I declared—I was going to write a steampunk novel set in the Belgian Congo! Egged on by Swanwick’s shudders and eye-rolling I added:

“And I will make you beg to read it!”

Then I had to figure out how.

My first glimpse of a way forward came in the form of a reference to an abandoned “Utopia” in Brazil called Fordlandia. Fordlandia was Henry Ford’s capitalist experiment in community building. The US automaker wanted to monopolize Brazilian rubber production, and rubber was what drove King Leopold II of Belgium in his shameful tyrannizing over central Africa. So there was a very visible connection between the two men behind these different projects… but what if people who wanted to create a real Utopia had set one up too? Britain’s Fabian Socialists, with whom I was familiar due to my aforementioned fondness for all things Victorian, were likely candidates. What if they’d bought land from Leopold, feeding his greed with the funds that in actuality they used to found the London School of Economics? What if U.S. Civil War veteran George Washington Williams, author of the scathing “Open Letter to His Serene Majesty Léopold II, King of the Belgians and Sovereign of the Independent State of Congo,” had lived a long, activist life instead of dying soon after his investigatory visit to Boma?

As I wrote along the lines these inquiries suggested, I also paid attention to my usual favorites: sensory cues (What does a crashing dirigible sound like? How does a warehouse full of tea and bauxite smell?), characters’ voices (Who asks lots of questions? Who never hears anyone’s answers?), and complications (Would arranging for this one to get what they want mean that one’s dreams were indefinitely deferred?). Because I wanted people to immerse themselves fully in the possibilities of Everfair.

Though millions of people died during Leopold’s brutal reign, many of them horribly, I wanted readers to want to read what I was writing. I wanted to sneak past the defenses we all have in place against pain and suffering, even—or maybe especially—suffering perceived at third or fourth hand. One of my most trusted secret weapons in carrying out this infiltration was Lisette Toutournier.

The model for Lisette, arguably the book’s main character, is my favorite author, Colette. While Colette’s work often conveys the sensual pleasures of nature, I’ve endowed Lisette with my own gear kink. In her sections there are loving descriptions of train engines and steam bicycles and so forth. Lisette finds a tour of a ship’s coal hold a much more romantic gift than a lacy negligée. After indulging with her in the delights technology offers, my audience would be willing to thoughtfully consider the price we pay for those delights. I hoped. Feedback from early readers indicates this ploy is a success.

Now to try it on you.