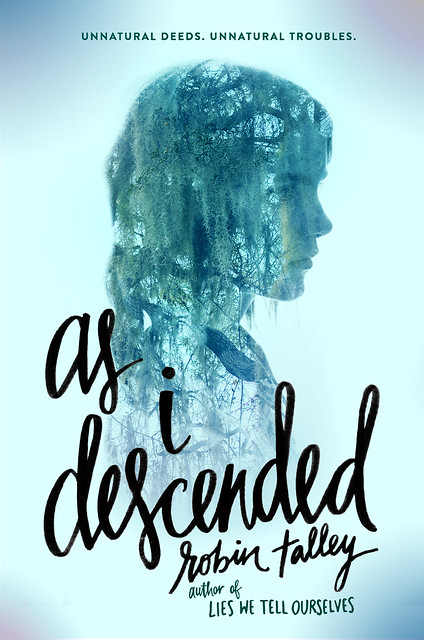 Shakespeare is often reinterpreted, reinvented and remade — but for her novel As I Descended, author Robin Talley discovered that revamping a tale from the bard was not as simple as just slapping on new clothes and modern language. There was a whole lot more going on.

As I Descended is the first book I’ve written that actually has a convenient elevator pitch. “It’s a lesbian retelling of Macbeth, set at a haunted boarding school,” I could say, were I ever in a situation where I was actually expected to describe my book in an elevator. Which hasn’t happened yet, but I’m glad this time around I’m prepared. My first two books both took a paragraph or so to sum up, so they didn’t lend themselves as well to elevators. Or tweets, for that matter.

And maybe this isn’t a coincidence, but this time around, the concept for the book came to me a lot faster than usual, too. I knew I wanted to write a retelling ― I’ve always loved retellings of classic stories, from West Side Story to Malinda Lo’s Ash to The Lizzie Bennet Diaries ― and once it occurred to me that the Scottish Play would work beautifully at a modern high school, the basic pieces of the plot fell into place quickly.

I almost couldn’t believe no one had already written a YA Macbeth with girls in both of the leading roles. The story is a perfect fit for today’s overachieving high school culture, in which so many girls consider themselves failures if they aren’t valedictorian, sports team captain, Prom Queen, student body president, and every other achievement they can dream up all rolled up into one ― while of course also maintaining a “perfect” body and a vibrant social life. And all while making crucial decisions about which absurdly competitive colleges will lead them into the highest-paid hedge fund careers available.

I decided early on that my main characters would be Maria, the second-most-popular girl in school, and her roommate and secret girlfriend, Lily, who dreams of a grand future for them both. Instead of witches, Maria would be manipulated by a team of vindictive ghosts who haunt the 17th-century Virginia plantation that has been remodeled into the exclusive boarding school the characters attend.

(I don’t necessarily believe in ghosts, by the way, but they terrify me all the same. When we moved into our old house, my wife had to actively work to convince me that the front bedroom wasn’t inhabited by the spirit of the old woman we’d been told died there a few decades before. To be honest, I’m still not completely sure my wife was right about that one, but thanks to her efforts I did manage to live there without panicking every time the bedroom door opened on its own. (Which it did, by the way. Constantly.))

Those elements came to me right away, but the rest of the book wasn’t so straightforward. I got tripped up on a lot of the specifics of retelling the original story. For example:

For months, I carried around a paperback Macbeth that rapidly grew tattered as I constantly flipped through it, searching for relevant lines and pouring over dialogue and soliloquies to figure out exactly what Lady Macbeth was getting at what she muttered that aside, and what Greek myth that weird metaphor about blood referred to. This play has so. Many. Blood metaphors. Dude.) I watched adaptations, too, trying to wrap my head around the way various actors played Macduff, the character I had the hardest time connecting with in the play (though my version, Mateo, wound up being one of my favorite characters in As I Descended by the time I was done writing).

Of the books I’ve written, this one was by far the most fun. I got to indulge my inner lit-major geek. I got to go to the library and read critical essays interpreting the Tomorrow and tomorrow and tomorrow speech. I also got to write scenes that scared me so much I had to turn on every light on the second floor of my house before I could force myself to edit them at night.

For my next retelling, though, I might stick with a comedy. Less blood. More banter.

← The Scamperbeasts at One: Today You Are a Cat
The Big Idea: Tom Crosshill →