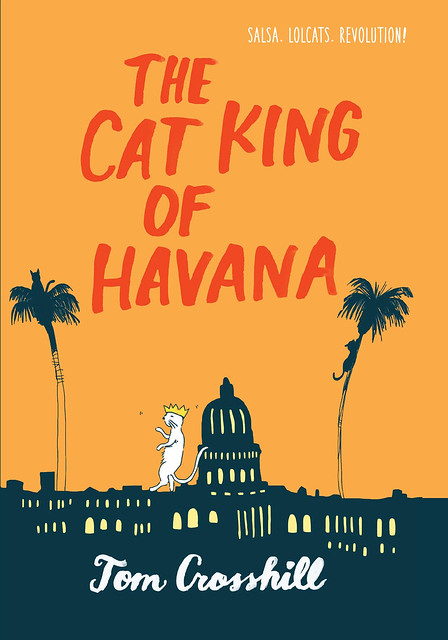 Speaking as a nerd who took two years of dance in high school, this Big Idea piece by Tom Crosshill, about his novel, The Cat King of Havana, speaks to me. Read on to find out why.

My YA novel The Cat King of Havana is a tale of salsa, lolcats, and revolution. There’s the Cuban secret police, there’s dangerous dancing, there are kittens with jetpacks. But the Big Idea that propelled the book had nothing to do with any of that. Here it is:

Geeks don’t have to be klutzes.

If only I had believed that as a kid.

In junior high, I read five SF books a week, spent my afternoons playing video games, and worked on a novel about a tribe of dwarf magicians who arrived through a portal in Stonehenge to address the United Nations General Assembly in Manhattan. I was also a total klutz who sucked at every sport, didn’t know how to talk to people, and got bullied.

I have friends who started out as nerdy, bullied kids and became not just accomplished runners, roller derby stars and parkour masters but also well-socialized doctors and lawyers — and even schmoozing politicians. Talking to these friends, though, I hear the same story a lot. How they had to fight against incredible opposition — from others’ stereotypes as well as their own self-beliefs — to achieve personal transformation.

I’m not saying all geeks need to get athletic or fire up their social skills. I support a broad spectrum of geeky life choices — whatever makes you happy. I wasn’t happy as a kid, though, and not just because of the (reprehensible) bullying.

I simply didn’t believe I could change.

Developing that belief took years, the encouragement of good friends, and many small, frustrating steps. With The Cat King of Havana, I wanted to help someone develop this belief a little faster.

I knew that preaching — well-meant advice to “just exercise”, “just go out there and meet people”, etc — wouldn’t work. Instead, I set out to portray one kid’s fumbling journey to change as frankly and honestly as I could.

Rick Gutierrez, the Cuban-American teenage protagonist of Cat King, is an SF-quoting, comics-reading cat video tycoon. His site http://www.catotrope.com gets 30% of all non-YouTube cat video traffic. Known as “The Last Catbender” online—and as “That Cat Guy” at school—Rick isn’t cool and he knows it.

When his girlfriend dumps Rick on his sixteenth birthday because she doesn’t want to stay indoors with him all day, he decides she has a point. He no longer wants to live the geek loner stereotype. He wants to be cool.

That’s a tall order for anyone.

How do you keep going in a situation like that? Everyone’s answer will be different. To me, the important thing was acknowledging that change can be painfully hard, and that it is still worth it.

2) Those around you will resist you.

Rick’s classmates make fun of his new interest. They mock him and post derogatory Facebook comments. If anything, the bullying he faces intensifies.

The people around him have their own idea of who Rick is, and they won’t let it go. It takes a lot for Rick to believe in himself in the face of that.

Well, in fact, he doesn’t always. But he manages to keep going.

Physical klutziness isn’t a geeky boy’s only challenge. Rick also falls for a new girl. Ana Cabrera, smart as well as cute, is one hell of a dancer. And she’s not that into him.

Rick invites Ana to spend a summer with his family in Havana, claiming he just wants to be friends. Under the influence of his cousin Yosvany — a successful ladies’ man ready with a hundred Pick Up Artist tricks — Rick tries every ploy in the book to “get the girl”.

Ana’s tough and smart, and will have none of it. In the process, Rick realizes he’s becoming a dick. He has to deal with the consequences — and figure out what kind of man he wants to be.

I know from personal experience that this kind of growing up can be exquisitely painful (certainly this is not a problem limited just to us geeks). For a boy with limited social skills, figuring out how to form genuine and respectful romantic relationships can be far harder than getting in shape or learning to dance.

Mortifying mistakes are easy to make. These can quickly lead to frustration and self-protective anger. As we can see with the disturbing rise of Gamergaters, MRAs, self-styled “incels” and other men-in-denial, from there it’s just a few steps to objectification and outright misogyny.

In my book, without condemnation or moralizing, I tried to model a different path to male adulthood.

The Cat King of Havana is a story of salsa, lolcats and revolution. It’s also the story of a boy struggling to become a fully-realized, decent young man.

Nothing about Rick’s transformation is easy. Going against societal expectations and limiting self-beliefs is never easy. But if I’ve done my job well, my readers will believe it can be done.