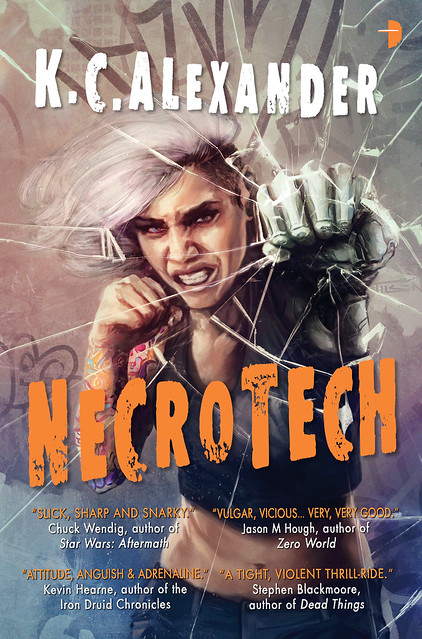 In his Big Idea about his most recent novel, Jay Kristoff says it began (more or less) with an argument about vaginas. The anecdote is great. The context, on a broader scale, is the story of my life. As it turns out, having—or not having—a vagina informs the names, epithets, expectations and arguments set for me.

I don’t like boxes. And neither does Necrotech’s protagonist—a type of woman whole sub-sections of societally-minded folk remind us don’t and shouldn’t exist.

Riko is a splatter specialist (that’s Tarantino level of gory mess, in case the title wasn’t clear) with all the agency of a man—and in being this, she tests the boundaries of what a woman in a book is supposed to be in this enlightened age of women’s rights. She is not soft. She is not tender. She would prefer to put a boot in your teeth instead of “work it out”, she lacks all maternal instinct, and her flaws are loaded for bear. With all the swag of a street thug, a policy of pleasing herself first, and a piss-poor temperament for emotions, she’s nobody’s idea of a good girlfriend.

She tends to somewhat proudly think of herself as a bad boyfriend.

And she came from a space of deeply engrained social erasure.

I am Necrotech’s Big Idea. Me, and the people like me who are so often told that we can’t, don’t, shouldn’t. That what we are, what we present, is problematic for the greater society. The cause. The fight.

I am a person with a vagina who will not play the game. Whose choices are decried by those who demand I do.

I am a sexuality too straight for queer and too queer for straight.

I am a body too feminine for masculine respect and a mind too masculine for feminine acceptance.

I am caught in a tangled web of expectation. Whose behaviors and needs and identities are policed by a majority—or a very, very loud minority—and who has finally, finally decided that enough is enough. So I wrote about it.

The Riko we meet at the beginning of Necrotech is ten years past that epiphany, street-hardened and gleefully independent. She lives the life she pleases, and she rolls with the decisions she makes. She makes her choices with zero interest in what she is supposed to do.

It’s a lesson fifteen years in the making. A book informed by a lifetime, and wrapped in the trappings of a future I see coming; the bastard hate-child of Transmetropolitan and forward-facing remnants of vintage cyberpunk. It’s grit on grit, a world trapped in its own technology, a city teeming with the vermin of the human population, and busily enacting the terms of its own demise.

Maybe that much is fluff—albeit fluff made from shattered glass and razor blades. Maybe the scope of Necrotech is bigger than one woman, one Idea. Anyone reading it might think that the real Idea is one of humanity’s obsession with technology, with its own limitations, with the need to breed and squat and defile, or that it’s about our need to feel as if every day is an achievement, encouraged by apps that give gold stars every few moments for every step.

If you read Necrotech and think it has nothing to do with this woman-who-acts-like-a-man, that’s okay. There are enough Ideas in the book, in the series as it will be play out, to talk about, think about, embrace or reject.

Maybe you’ll hate or love me for writing her, this person with a vagina who has been scarred by the expectations of the world she lives in and is giving a giant middle finger to it all.

I know why I started writing this woman who does not care what you think of her. Whatever else the overarching themes, I know why Riko is the heart of it, the voice of it, the eyes seeing it all unfold.

I am Riko—with my snarl in place to warn away any asshole who wants to tell me how I should behave, my finger upraised to everyone who ever told me I was doing it wrong, my heart wrapped in diamondsteel where nobody can reach it to re-program what is mine. Like Riko, I’m not exactly bulletproof, but I can take it with a bloody smile and still come back to kick ass.

My name used to be Karina Cooper. I wrote what was, in so many ways, expected of me. And when I started Necrotech, I defied every expectation. And because I did, it suffered every rejection—until I realized that the ‘me’ that had been cultivated was not the me I was. That I had spent my life thinking I was strong and individual and independent, only to learn that I was so very wrong. And most of all, that the book I’d written wasn’t Karina’s story to tell.

Now my name is K. C. Alexander. Riko may be me incarnate—cranked to 11—but I like to be called Kace.

My problem has always been that I was not womanly enough for the world that demanded I be.

My Big Idea is that it’s a feature, not a bug.

I’m genderqueer. Both and neither. I am feminine and I am masculine, pansexual and nuanced, and I know women like Riko exist. That they should be allowed to exist, encouraged to exist, written with authority and with sincerity by the people who understand what it is to cross the borders laid down so sternly by gendered gatekeepers.

One of Necrotech’s Big Ideas is that we don’t have to be what we are told we are.

I am an unlikable heroine. An aggressive protagonist. An irredeemable hero.

We exist. We have stories to tell.

← In Which I Turn Out To Be a Surprisingly Poor Agent of White Genocide
New Books and ARCs, 9/9/16 →