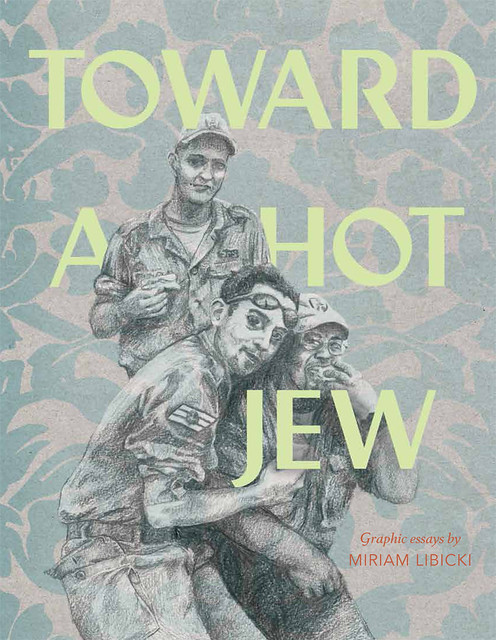 What happens when you stop doing what people expect of you, and start doing what you expect of yourself? Miriam Libicki knows, and she’s here to tell you in this Big Idea about her new book, Toward a Hot Jew.

Toward a Hot Jew is a collection of drawn essays, originally made as self-published zines over the course of ten years. “Drawn Essays” is my own term for a kind of nonfiction comic, where words and images are combined to make a point, but not always with panels, speech balloons, or direct transitions. As the title suggests, these essays look at culture, identity, and racial and gender roles through an American-Israeli-Canadian and very Jewy sensibility. Why did I make this book?

My first few months at art school, I thought I had reached the Promised Land. The kids in my painting class would hang out in the studios all night, layering glaze over glaze, bringing twice-life-size canvases to class worthy of renaissance masters (if renaissance masters ever painted themselves being eaten by dogs). I wanted to be a vessel for whatever these creatures could teach me. 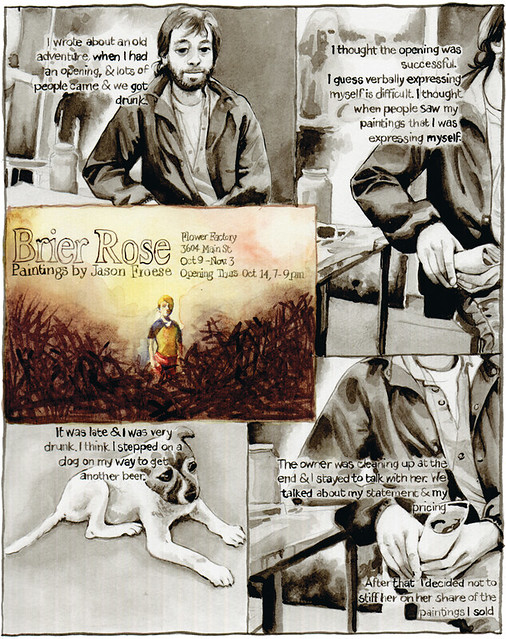 My intro painting professor was even more awe-inspiring. She made tiny oil paintings on wood of impressionistically-rendered hurricanes, wildfires, and other natural disasters. I could stare at these paintings for hours. Then she invited us to the opening of her solo show in a downtown gallery. This was it! The Art World!

Half an hour into the opening, I wanted off The Art World forever. My professor had put up an artist’s statement at the entrance, which was nearly as big as all the paintings combined. It was about taking disasters and turning them into kitsch, how the paintings were an implication of our consumerist tendencies, a commentary on how humanity makes our own terror cute. Which was bullshit. Her paintings weren’t cute, and they certainly weren’t kitsch. They were BEAUTIFUL. She did convey the terror, and she clearly got pleasure out of how lovely her tiny paintings were. But apparently The Art World wouldn’t let her say so. She had to be cynically dismissive of her own skill, in favour of the grand anticapitalist statement. 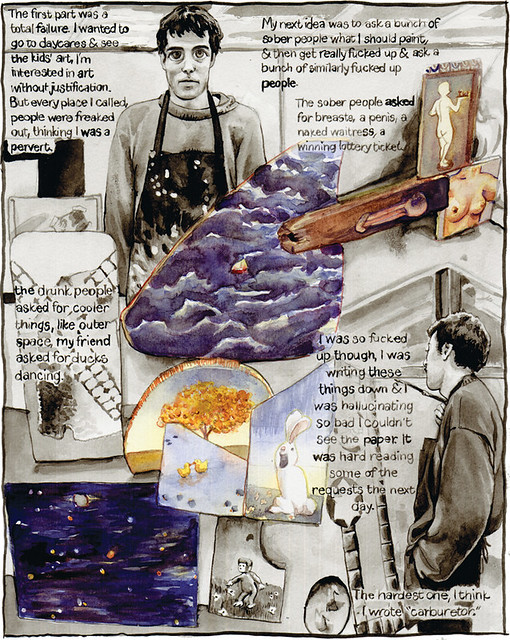 If I had to choose between the art and the artist’s statement, I chose the art. And if low, commercial art was the place where I could sell my art to people without an adjacent statement permitting them to like it (I could put my actual thoughts in text, right in the artwork), I’d take the low road.

I started to let figures from my comix-fan sketchbooks into my paintings. I got comments during critiques like “narrative” and “decorative”, which were not compliments. In third year, I incorporated the memoir comic I was developing into a big tapestry-like graphite drawing, and got the worst crit of my life. 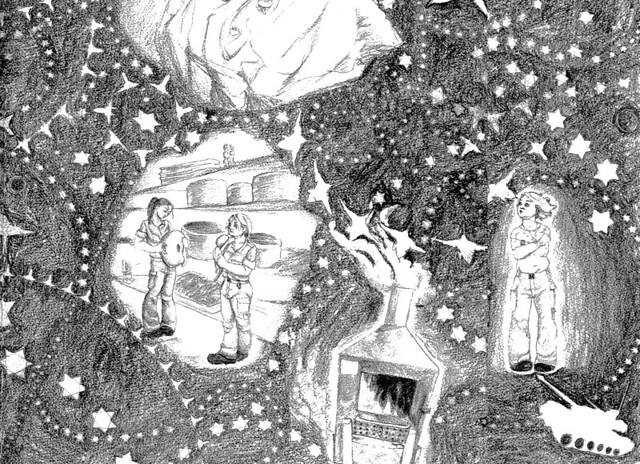 Classmates said they couldn’t even think about the figures because they had big feet and floating hair. Sticking up for me, a girl said, “the crazy thing is, Miriam can paint amazing realistic portraits.” I was flattered, but confused when people started discussing my art going “in two different directions,” with the implication that the comic stuff was the dumb side, unworthy of someone who could paint a skin tone. The question I was left with was, “You seem like such a smart girl. Why do you draw comics?” 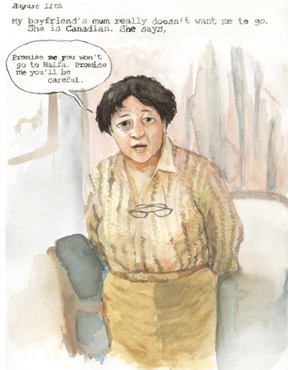 I was attracted to comics because I’d always read them. Comics were accessible and egalitarian. I like the idea that the “original” of a comic book is the mass-printed copy, not some fetishized Mona Lisa under glass. I mused in my journal that night, “maybe if I were more skilled I could stick it out, and make everyone love comics in painted form. But maybe that’s not my job? After all, I keep claiming I like comics for their accessibility, and if cartoony pathos is just not accessible to my classmates, maybe I should take a different angle.” 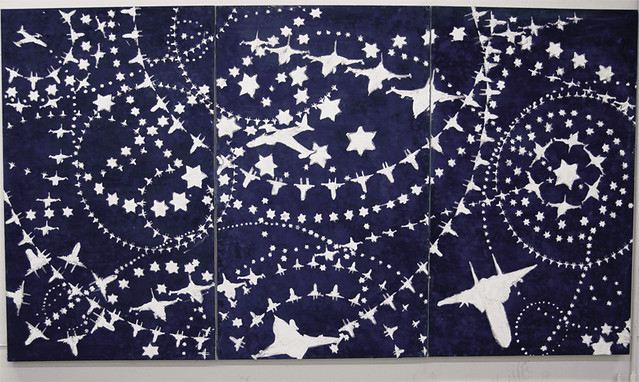 I did take a different angle that semester. I took the people out of my star drawing, and turned it into a monumental triptych in oils. People liked that a lot better. But I just couldn’t stop comicking. Although I could learn from classical and conceptual art, being acceptable to my peers was not where my heart was at.

In senior year, I spent months making a drawn essay about the Israeli soldier as sex object. It was kind of my way to deal with how I still romanticized Israel, after having gone there, served in the army, had a terrible time, and moved to Canada. Dreading crit, I wrote in my journal, “It’s another one of these projects I seem to like to do, that are ambitious, very close to my heart and…… have an element of combativeness.” 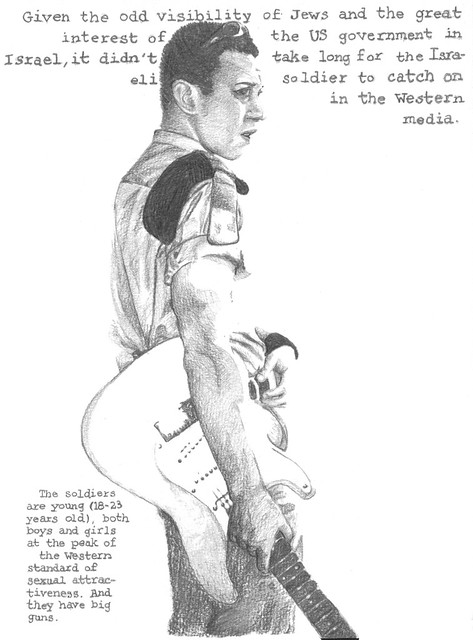 That piece ended up being the title essay of my book, the one I’m supposed to be telling you about. I camouflaged its comicky nature. Though the essay comprised twelve pages, divisible by four like a proper zine, I didn’t bind it.  I blew up the drawings at Kinko’s to 4×5 feet, and hung them around the classroom. Not a comic, an installation!

After my final senior crit, I wrote: “It was generally well received. Everyone thought the drawings were very beautiful. I know Canadians shy away from anything socially uncomfortable, and that was part of the reason I really wanted to make the drawings so attractive, to force people to read things they probably wouldn’t otherwise.” 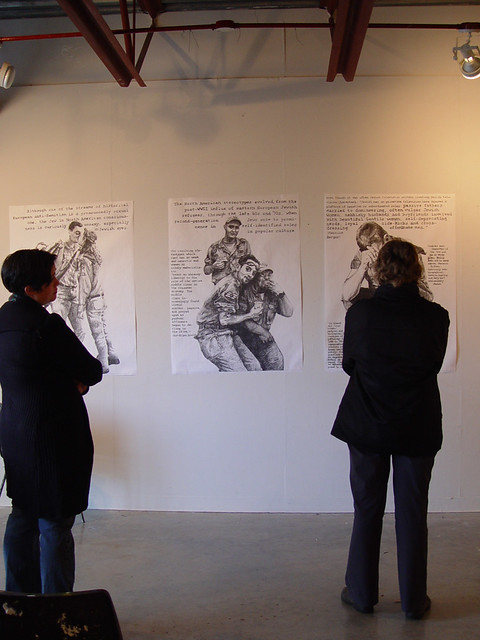 That was, looking back, the final insight that allowed me to make this book, zine by zine, through marriage and kids and more school, over the next ten years. I don’t have to fit in in The Art World. I don’t have to fit in to The Comics Industry, either. I can make what I want, and if the subject is strange, accessibility can be achieved through proceeding with enough beauty, or humour, or pathos that any viewer can find something to hold onto. That’s my hope anyway. 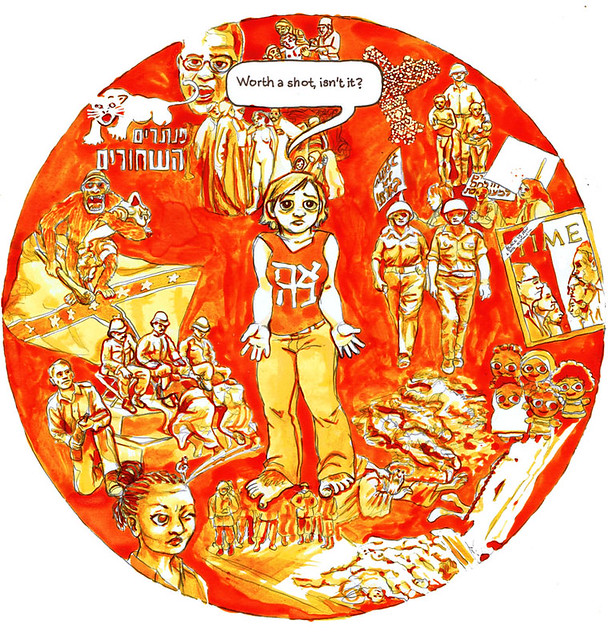 Toward a Hot Jew is available via the Fantagraphics Web site.