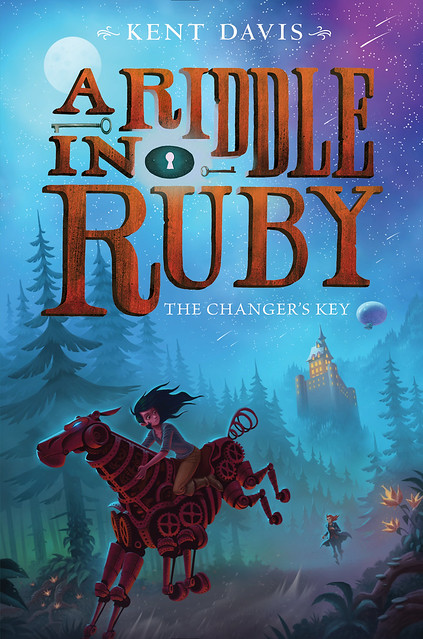 History — or possibly, “history” — is not necessarily as done a deal as it seems in retrospect. Or so Kent Davis might suggest, in reference to his latest novel, A Riddle in Ruby: The Changer’s Key.

History has never been inevitable.

There’s this apocryphal story that Francis Bacon, one of the trailblazers of Western scientific thinking, died in the 1600s of pneumonia after trying investigate the application of snow to preserve flesh, namely that of a dead goose on the side of the road in a snowstorm. I’ve always thought this story was particularly charming, an example of a kind of ferocity of focus that results in amazing scientific and creative discoveries but also losing oneself in the strange corners of video game landscapes.

Here’s the Big Idea. What IF Bacon hadn’t died? What IF he had discovered a way to harness a kind of internal mojo, bend the laws of chemistry, and then convert the solid snow to gaseous vapor, forestalling the pneumonia and discovering in the process that the arcane science of alchemy could be used for all sorts of cool applications and moreover, was REAL?

There would have been ripples.

This new arcane science might have thrust technology forward. Humans using this alchemical magic to perform actual miracles might have had a profound impact on the religious Great Awakening of the 1730s and 40s. They might have also created clocklock pistols and astonishing sources of energy and terrifying gearbeasts and cool-as-hell alchemical automatons.

The world of A Riddle in Ruby is one that attempts to weave the pluck and gumption of the early 1700s American Colonies with the anything-is-possible spirit of the beginning of the industrial revolution. Well, with awesome magic. One of the core Big Ideas of the Ruby series is to propose this:

Just because history says things happened one way doesn’t necessarily mean that they had to.

What IF tall tales of the ferocious ball-tailed cats of the western forests were true? What IF there were powerful secret societies that primed the pump of revolution? What IF an audacious, ferocious, precocious kid carried a secret that could change the face of the world?

I tried to weave this question into the characters of A Riddle in Ruby, as well. Ruby Teach is an apprentice thief and daughter of a fake pirate, but her life is not the sum of her chosen discipline or where she comes from. The choices she makes—to try to rescue her father, to preserve her friends, to carve the path of her life—have profound and lasting effects on the world around her.

The thing I love about the intersection of alternate history and kids’ books is that it offers us the possibility that the shape of the world we live in wasn’t inevitable. That the choices that people and societies made in the past have brought them to where they are now. More importantly, that the choices we make do matter, and that what you choose to do now, as a ten year-old on the playground or as a forty year-old at the ballot box (just saying), could have a profound impact on the shape of our world in years to come.

Book 2 of the A Riddle in Ruby series, The Changer’s Key, comes out today. Choose wisely.