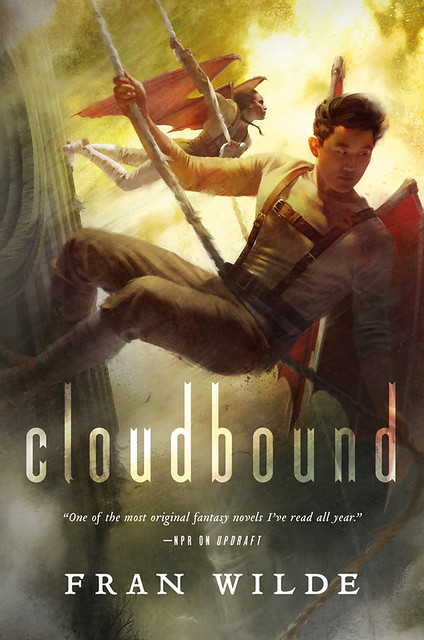 When Norton Award-winning author Fran Wilde sat down to write Cloudbound, she wasn’t intending to write something whose politics had parallel with the world outside of her book. But sometimes, as she explains today, the world catches up with you.

What happens when you write a book about the political twists of a secondary world, then real-world politics go pear-shaped?

At the outset of Cloudbound, the companion novel to Updraft, my main character, Nat, wants to be a leader. He wants this for a number of reasons: security for himself and his family, the fact that he’s had to help save his city from bad leaders, and a desire to serve his community.

These aren’t bad reasons at all.

Problem is, Nat has only a little idea how to lead, and he’s getting some questionable advice. Worse, he’s confusing the tasks of leading and the trappings of leadership with actual leadership.

He gets over this, with some help.

At the time I wrote Cloudbound, world politics had been on a slow simmer of win-or-lose teamsmanship for some time. As Cloudbound comes to publication, numerous places around the world are seeing a resurgence of say-anything-to-win high-stakes mongering, and, worse, demagoguery, sometimes on the part of people who wish very deeply to serve their cities and countries.

Because of the time it takes to publish a book, I watched Cloudbound’s release date converge with some of the real world events and I wondered… If it’s getting stranger than fiction out there, what does that mean for Cloudbound?

One of the big ideas for Cloudbound was leadership, plain and simple. Different ways to lead, how to move forward, how to lead by example. The book is also, then, necessarily about politics and rhetoric, networks and people-hacking. Nat’s not exceedingly good at these either, at first. And he’s got blind spots — because his political mentor has blind spots.

Leadership is one of those strange words that can mean — often simultaneously — the act of leading and the position of a leader. One meaning is active and in motion, the other has the mental tonnage of the big seat at the head of the table, and accompanying burdens of power.

For Nat and his friends to navigate the ‘after’ of Updraft, they need to learn how they are comfortable leading, often in the face of tremendous pushback from their community. Expectations are solidifying around them even as they are still learning what their expectations are for themselves. And Nat, holding power for the first time, stands on the boundary of learning and doing.

It’s heady space. And a pretty big risk, both for him and the story, because he’s not doing the learning in a vacuum. The city’s under threat from internal forces as well, and Nat’s under pressure to find something important that’s gone missing. How he does this is, in part, tied to how he discovers the hidden history of the city. But doing so brings him into direct conflict with some big bads.

The big bads in the real world right now seem to be getting bigger.  Maybe a few kids up in the Bone Universe sky learning about leadership isn’t such a bad idea.