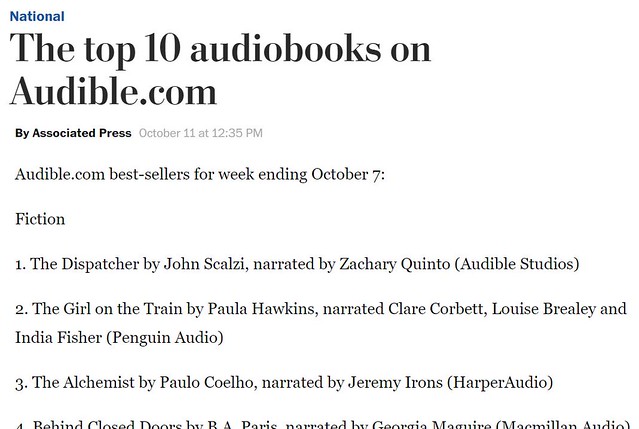 1. The Dispatcher was released one week ago today and during the week apparently a ton of people, hungering for my excellent words and Zachary Quinto’s thrilling narration (and also possibly because it was distributed for free) downloaded it — enough to make it the #1 title on Audible for the last week. Which is pretty awesome I have to say. I will take my #1 titles however they come about, and as it happens I’m really happy this one did well, since I like it so much.

If you haven’t gotten it yet then you can take part in my quest to stay in the Audible top ten for a second week by downloading it this week — it’s still available for free (and will be through November 2nd). Give it a try. It’s good. And if you like it, let other people know about it. 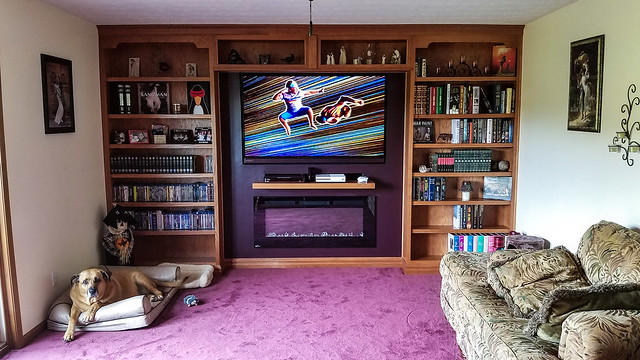 2. The front room is officially finished, with the shelves officially populated with books and things and the cable box for the television set up and so on and so forth, so I thought I’d show you all its final form. I have to say I’m very pleased with how everything looks and functions. I’m especially happy with the TV, which is a 4k job. Yeah, I splurged. Sue me. Oddly enough, however, when I show people pictures of the front room, the thing that they really comment on is the carpet. Yes, it’s purple. And yes, actually in real life it looks pretty great. So there.

3. While I was at New York Comic Con, I got to hang out with Adam Savage and Norm Chan from Tested (you might also recognize Adam from his Mythbusters days) and sat in on their “Still Untitled” podcast, in which we chatted about conventions, fans and the whole nerd life. Here’s the link to their site, but if you’re the super-impatient “ugh do I have to click through” sort, I’m embedding the YouTube version of the conversation below. Enjoy!

39 thoughts on “The Dispatcher Hits #1, The Front Room is Finished, Hanging Out at NYCC With Adam and Norm”