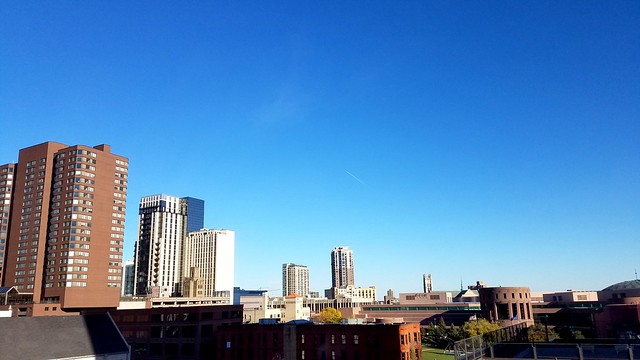 And a lovely view it is.

Reminders! Tonight I am the Roseville library at 7pm! I will be reading stuff as yet unpublished! And tomorrow and Saturday I am a featured guest at Nerdcon:Stories, which promises to be even better than last year’s, and last year was pretty great. Tickets are still available! If you’re in the Upper Midwest, come on down. 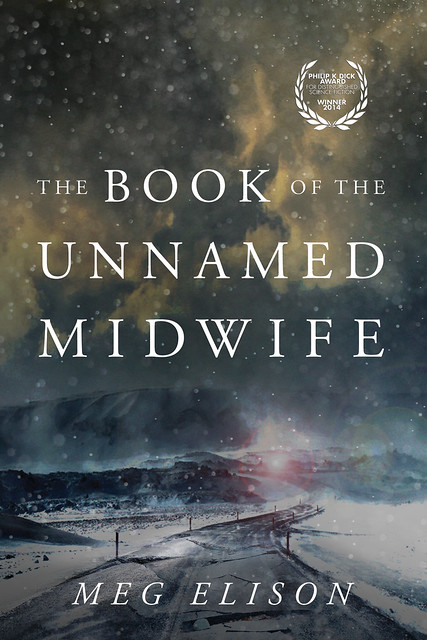 Well, this Big Idea, by Meg Elison, for a new release of her 2014 Philip K. Dick Award winner The Book of the Unnamed Midwife, is strangely and unfortunately well-timed.

The biggest idea in The Book of the Unnamed Midwife is that women are people. I have read exhaustively in the genre of post-apocalyptic science fiction and more often than not the women in those books are sex-dolls and mommy-dolls: perfect eyebrows in starvation and smooth armpits in the Thunderdome, exiting cleanly stage right after their magical boys are born.

However, the idea of women as people is too big. Better writers than I have worked to sew it firmly to the edges of our collective consciousness only to find that the original fabric is stubborn stuff that was woven to resist truth or anything like equality. So when I wrote my apocalypse (worlds without end are always ending in science fiction and fantasy) I wrote it as Margaret Atwood and P.D. James did. I wrote an apocalypse of gender, where men outnumber women ten to one, and no woman is safe.

By writing a main character who is queer and secure in herself and a midwife, I set her boundaries pretty clearly. This is a woman who exists under her own authorization. By writing her as complex and flawed and not a steel-armored bad-ass Sarah Connoring her way across the competence porn convention with a gun where a protagonist’s penis ought to be, I wrote a book where women are not objects and not stereotypes, but people. When I was reading science and speculative fiction about the end of the world, this was the thing I craved most clearly. When I could barely get a crumb, I realized I’d have to bake the thing myself.

The Book of the Unnamed Midwife starts at the end of a plague that has wiped out most of the people on earth, but was particularly brutal to women. The women who have survived still carry the sickness, and childbirth is commonly lethal in its aftermath. The protagonist hits the road dressed as a man to help the few women who survived, and to seek safety for herself. The road is not kind to her.

However, since the idea that women are people is evidently still too big, I chose a specific strategy to address the universal challenge: namelessness. The Book of the Unnamed Midwife follows the story of a woman whose name is never told. She never says it, thinks it, or writes in the journals that make up about half of the book. Instead, she gives a variety of pseudonyms to friends, lovers, and the enemies around whom she attempts to pass as male. This is partly a safety measure, but it’s also something else.

Names have power. Any child who has heard the story of Rumpelstiltskin can tell you that.  The midwife herself thinks about her namelessness, her anonymity in this world where people have fallen out of their names and into savagery, and comes to the conclusion that a name is something one has for the benefit of other people. In a world where most women are property, she decides she will give no one her handle.

Nameless protagonists have always fascinated me. Daphne Du Maurier’s never-named ingenue in Rebecca seemed the best kind of literary proof: a woman is so defined by her place in the world that her own actual name is easily missed. As a child, I loved the Childlike Empress in Michael Ende’s The Neverending Story, but I saw the movie first. I could never hear the name that Bastian shouts over the thunder and I thought the author and screenwriter had wisely chosen to keep the name unknowable and preserve the empress’ power. Even if she had to beg for a new name from a boy, she could still keep it to herself.

Finding out that the name is written clearly in the book was one of the great letdowns of adulthood. I decided long ago to write a protagonist whose name is her own damned business.

The Book of the Unnamed Midwife was first published two years ago by a micropress. Almost nobody read it, but it won the Philip K. Dick Award anyway. When my new contract included a rebirth for the midwife, I reflected a little on what it is to twice debut my unnamed survivor. The book will be reborn in a time when a man who may be president has shared his views about his right to pick up an unsuspecting woman like a bowling ball, and immediately after the non-consensual outing of reclusive author Elena Ferrante. The midwife’s choice to remain nameless is my answer to these times. It was my answer to the War on Women that consumed the news when the book was first written, and it remains my answer as this tiresome year grinds torturously to its end.

I hope that one day there is an audience who doesn’t immediately recognize the unnamed midwife’s struggle as their own.