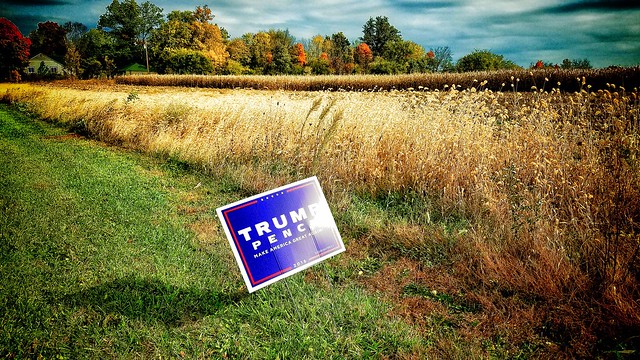 So you may not be surprised when I tell you the area in which I live is heavily tilted toward Trump in this election, and when November 8 rolls around, I expect him to win my county handily, likely gathering something like 70% of the vote.

Do I live among idiots? No. I live among wonderful people who will clear your driveway when it snows and watch your pets when you go away, who love and care for their friends and families, who are decent people in their day-to-day lives and are folks I am proud to call neighbors. Most of them will vote differently than I do in this election. They do not live differently than I do. Our lives in Darke county are rather more in common than they are different.

But they are voting for Trump! And he’s awful! Yes, he is; as I’ve noted before, he’s manifestly the worst major party presidential candidate in living memory. He’s also up against the second-least popular presidential candidate ever (after Trump himself), whom the GOP and their allies have spent decades denigrating, who even her supporters must realistically acknowledge is not overbrimming with public-facing charm, who has a raft of policy and social ideas that don’t play expansively well in a county that hasn’t sent a Democrat to Washington as its representative since the Great Depression.

This isn’t to excuse Trump or the GOP. I wish my neighbors had both a better presidential candidate to support and a better party to field that candidate, one that (in my opinion) better represented the area’s generally conservative but essentially pragmatic nature. I think Darke county is the sort of place that the GOP has been gulling for years, relying on its appeal to the area’s social conservatism to push through policies that don’t help the locals at all. There aren’t a whole lot of one percenters around here to benefit from the fiscal and economic policies the GOP (and Trump) want to promote, and particularly in the case of Trump, the people here, reliant on farming and manufacturing, have a lot to lose.

It is to recognize that the Democratic party in general hasn’t gone out of its way to make places like Darke county a priority. The local Democratic party’s outreach, as far as I can see, is a single tent once a year at the county fair; the biannual Democratic candidate for OH-8 (when there is one; there hasn’t always been) gets little if any support from the national or state parties as far as I can see. Pragmatically it makes sense to cede the district; there’s only so much money to go around. But on the other hand it might be a little hypocritical for me or anyone else to criticize the locals for voting for the GOP — even when it has a historically awful candidate, who no one should vote for — when the GOP is the only political party that’s showing up in a real and significant way.

Darke county isn’t going away — its population and demographics (97.5% white) have been remarkably stable for decades. It will likely always be a conservative area; so long as the GOP exists and at least nominally represents conservatism, it will like vote for the GOP and its presidential candidates. What will be interesting to see is how it, and the places like it, will handle the inexorable shift of the nation from white and conservative to multicultural and, if not entirely liberal, at least liberalish. It is of course already happening. This is very likely to be the third presidential election in a row where Darke county’s preferred candidate didn’t make it to the White House. Given the direction of the national demographics, it might be a while before one does. 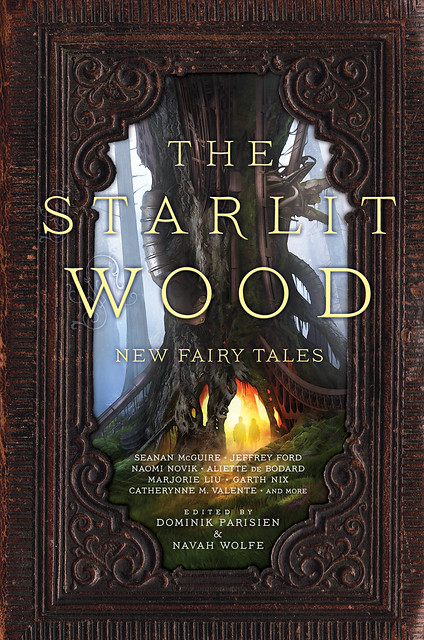 We live in an age of technological miracles and wonders, but do the humans underneath that tech still need the fairy tales that animated their ancestors? The editors of The Starlit Wood, an anthology of new fairy tales, say “yes.” And here’s why.

We are children of starlit woods.

From the time we were small, stories were tools we used to navigate the world. We were both voracious readers, devourers of books of all kinds—and we never stopped reading fairy tales. Kids have a tendency to translate the world around them in terms that make sense—and nothing makes more sense, feels more familiar, than the stories that we’ve been reading for as long as we can remember.

Fairy tales may start for many of us as children’s stories, but—as people love to point out, once they discover the true gruesomeness behind some of their most beloved tales—they’re in fact very adult. Indeed, we’d argue that fairy tales are meant to speak to children and adults. The world can be an unsettling, terrifying place, no matter what age or stage of life you’re in—and familiar stories can be a safe language to use to navigate the dark woods of life.

The utter universality of fairy tales can give us the necessary vocabulary to make sense of the woods, to find a path out to safety—or to claim the woods for our own. They help us identify the wolves, witches and dangers lurking in the dark. When you can name something, you have power over it—the power to change the story, to remake it, to reshape it into our own happily ever afters. They’re narrative tools that we grab hold of as children, but they remain useful for our entire lives.

And us? We devoured the original fairy tales and lost ourselves in modern retellings, often edited by people like Terri Windling and Ellen Datlow. And somewhere along the way, our roads led us to co-editing our own anthology of fairy tale retellings for Saga Press, The Starlit Wood.

And the more we explored the world of fairy tales, the more clear it became to us that fairy tales are a lingua franca for everybody. They are a language carved onto bones—bones that can be covered in any skin. Fairy tales originate from anywhere or anytime, but you always know they are fairy tales. The same tropes and themes pop up again and again–terrible parents, wandering children, fantastical animals, enchanted items, moral components—to a point where even if we don’t necessarily recognize the source material, a story still feels like a fairy tale. Side by side with classic, traditional stories, The Starlit Wood contains retellings of a few fairy tales we had never encountered before—but even though they were new to us, they felt familiar, like old friends we had just met for the first time.

And that is the big idea of The Starlit Wood. Fairy tales are malleable stories that can be reskinned over and over as long as the skeleton underneath remains the same. We approached our phenomenal writers and asked them to view fairy tales through a new prism, to discover new hides for these old bones. Some of the stories they chose are very familiar. Others are newly discovered or are from less familiar fairy tale traditions. The contributors each took fresh angles, crossed genres, and found new geographies for their tales. Writers flipped character motivations or even removed elements that one would think are essential to a particular fairy tale, making these stories feel fresh, unexpected, urgent–but still true to their source material.

The resulting stories were beyond our wildest hopes. Seanan McGuire put Red Riding Hood in the desert. Daryl Gregory let his Hansel and Gretel consume something much more problematic than candy. Marjorie Liu wrote Sleeping Beauty as a lesbian romance. Garth Nix turned The Little Match Girl into a Western revenge story. Stephen Graham Jones retold The Pied Piper of Hamelin without any music. Max Gladstone wrote Jack and the Beanstalk–with a space elevator. Naomi Novik turned the ugliness of Rumpelstiltskin into a beautiful triumph for the miller’s daughter that upturns the uncomfortable caricatures of the original tale.

From the woods to the stars, The Starlit Wood contains eighteen extraordi­nary journeys into unexpected territories, uncharted lands, and unforeseen adventures that are strangely familiar and startlingly different at the same time. We couldn’t be happier with these amazing journeys—so come and be changed with us. All of us, after all, are children of the woods.