Begun, The Yard Wars Have 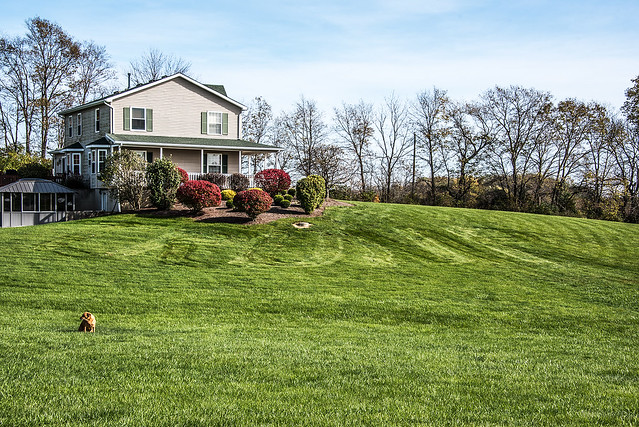 We’re pretty close to our neighbors Karen and Bob — not just because they live next door to us, but because they’re good friends of ours as well. Nevertheless, this election we’ll not be voting for the same presidential candidate, and we all know it, and that’s fine. It does mean that we rib each other about it a little bit. Last night, after Krissy was done visiting them, she “accidentally” ran over Bob’s “Trump” sign as she driving back over to our house, and well. Shots fired.

So just a few minutes ago I hear a loud noise outside my office window, and look down to see Bob on his riding mower, mowing letters into our yard.

Which letters? Well, if you can’t make them out from the picture above, let me trace them out for you: 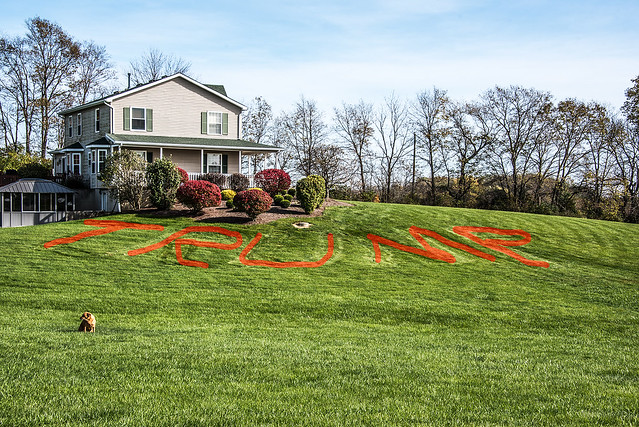 There’s a dog there for scale.

And how do I feel about this?

2. Even without the instigating act on the part of Krissy, I would find it pretty amusing.

Note that these hijinx in both cases are couched specifically in existing friendship — Krissy wouldn’t run over anyone else’s Trump sign (nor would I, for that matter), and I very strongly suspect that Bob’s not going to take up mowing “Trump” into anyone else’s yard. Krissy knew her act would be received good-naturedly, and that Bob would then feel obliged to respond in kind. And here we are with the word “Trump” shaved into our grass.

Again: Totally fair play. And motivation to mow the rest of the lawn sometime soon. 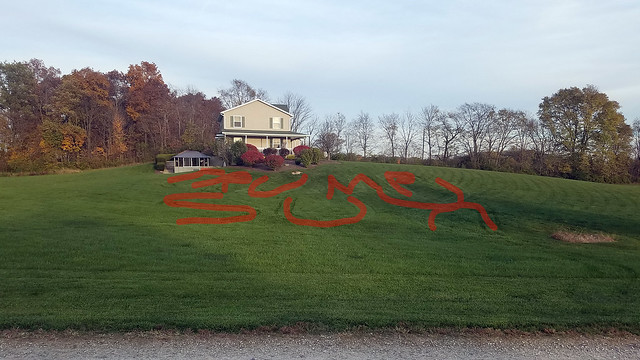 67 Comments on “Begun, The Yard Wars Have”