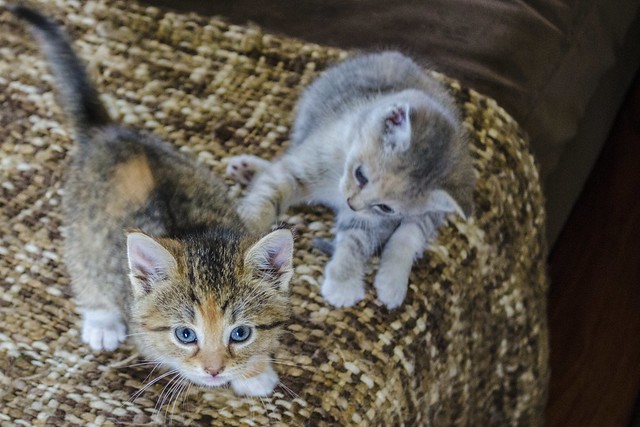 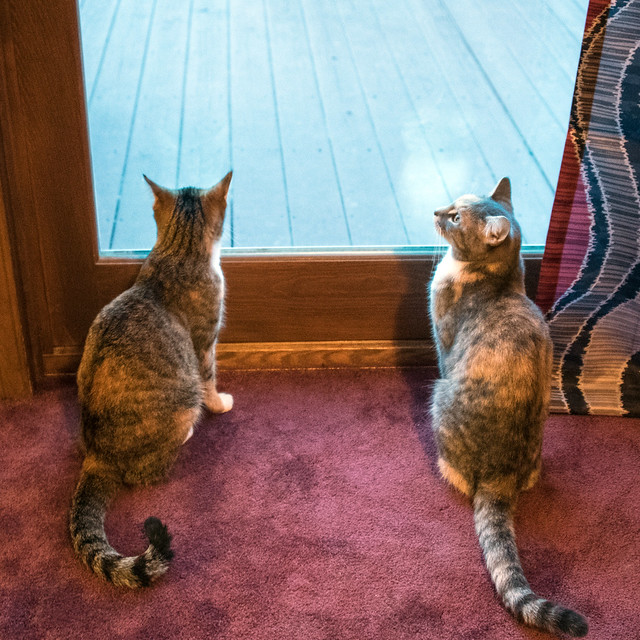 A year ago today we went over to my mother-in-law’s neighbor’s house and took possession of two eight-week-old kittens there. These kittens, tentatively named Thing One and Thing Two, eventually became known as Sugar and Spice, aka the Scamperbeasts. It’s been a pretty good year for them since then, as they’ve become beloved members of the Scalzi household, with Sugar becoming especially partial to Daisy, our large galumphing dog, and Spice apparently enjoying alternately antagonizing and adoring Zeus, the senior cat of the household.

Over the space of the year, other aspects of their personality have sussed out as well. Sugar, appropriately, is the cuddly the one — she likes sleeping with (or on) the humans in the household and will actively seek one out for pettings and affection. Spice also likes affection but on her terms, which is usually at 4am, when she will leap on the bed with a series of loud chirps. Sugar has claimed the front room as her primary domain; Spice prefers the master bedroom.

However, both these days prefer being outside. Once they were large enough not to be taken away by hawks, we let them out to roam around the Scalzi Compound, pursuant to our tradition of having our cats not only be pets, but working animals. To recap, there are agricultural fields on three sides of us, and in the fall, a lot of the rodents who had been living in the fields start looking for somewhere warm, and our house looks good to them. So the cats basically set a perimeter. As it happens, both of the Scamperbeasts are really good at the whole “don’t let rodents into the house” thing, and they pretty much stay outside until they are tired or decide they want kibble or petting. They’re country girls at heart. We’ll see what happens once it starts getting really cold overnight, however.

A year ago I was initially reluctant to take two kittens — more accurately, I was in the market for only one, although when both Athena and Krissy decided we should take two I didn’t put up too much of a fight — but I have to say that a year it, taking the two instead of just one seems to have been the right call. In the early months especially they kept each other company; these days they are rather more independent of each other but they are still obviously affectionate sisters. They make for quite a pair.

As I said, a good year for them, I think, and for us. We’re glad they’re with us and we look forward to them being with us for as long as they are. It’s been lovely to see them grown from kittens to cats. Here’s to the rest of it.

31 Comments on “A Year of Scamperbeastery”