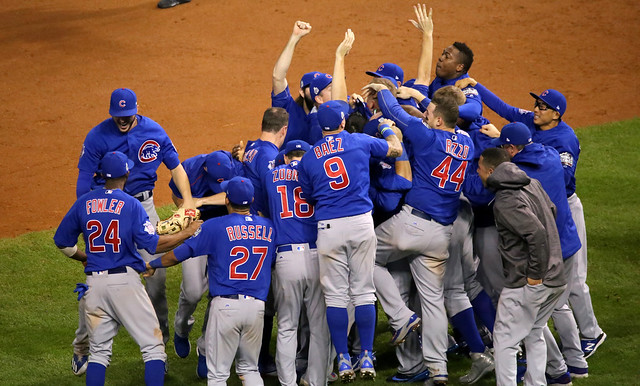 This year, as the Chicago Cubs came closer and closer to winning a World Series, people wondered what that might mean for the Old Man’s War series of books. After all, in several places I had people in the books discussing the Chicago Cubs and their inability to win a World Series, and in The Human Division, it’s actually a plot point. So what happens to those books, now that the Cubs, after 108 years, have won a World Series?

Well, you know. In one sense, nothing. The books are fiction, take place in the “future” and in a multiverse where space travel isn’t actually traveling in space, it’s traveling from one universe to another, where things are (usually) just one electron position different. So now either the events of the Old Man’s War series have been pushed further out in the timestream, for at least another 108 years (or so), or we’ve just become a universe so improbable that it’s unlikely the events of the Old Man’s War book will ever happen in it, but those events continue, about a billion universes to our left.

Which is it? You choose, either is valid.

As a practical matter, mind you, I think the plot points still work, they just got more meta. Now readers in North America, at least, are aware that the long suffering of Cubs fans has come to a close, and will enjoy the presence of the plot point on that grounds (or if they’re Cleveland fans, not). Readers will hit those points in the books, enjoy the slight bit of cognitive dissonance, and then move on.

But of course, with all those assertions above, it’s possible I might be rationalizing just a tiny bit. In which case, yup, it’s time to come right out and admit it: Now the Old Man’s War books suffer from the same problem as all the science fiction stories before 1969 that named a first man on the moon, or the ones that imagined canals on Mars. The real world caught up to them and passed them by, waving as it did so.

And that’s okay. This is the risk you take when you put a plot point in your books that’s contingent on the real world. It is the fate of science fiction books and other media to be continually invalidated by real-world events, or at least, to have the real world catch up to it and then have the work, by necessity, consigned to a nearby but undeniably alternate universe. This had already happened to the Old Man’s War series in a small ways (no one calls hand-held computers “PDAs” anymore, but the folks in the OMW series do, because that’s what they called them in 2001, when I wrote the first book), and in larger ways for other books of mine. Agent to the Stars, for example, has a plot point involving an elderly Holocaust survivor. In 1997, when I wrote that book, that was still a reasonable thing. Today in 2016, it’s a pretty long stretch. In another ten years, Agent to the Stars will undeniably take place in the past, in an alternate universe.

The real world catches up to science fiction. It always does.

But it doesn’t always kill the book (or film, or whatever), thankfully. 1984 is still read despite the titular year now being more than 30 years in the past; we watch 2001 despite us not having moon bases or monoliths at the moment; people still enjoy the various Star Trek television series despite the fact the communicators in each iteration are laughably less complex than a smart phone today. People seem to get that science fiction stories have plot points and details that expire, or, at the most charitable, “go meta.”

I suspect that will be the fate of the Old Man’s War books. The Chicago Cubs in that universe are a plot point, but a minor one overall. I don’t expect that many people will decide that the Cubs continuing to be lovable losers there will be the thing that throws them entirely out of suspension of disbelief. And if it does, I mean, okay? Their life. Everyone else will either push out the timeline, enjoy the meta moment, or, alternately (and especially if they’re not baseball fans), not care. I think the books will survive, is what I’m saying.

In the meantime, congratulations to the Cubs and all their fans. As someone who attended college in Chicago, this is lovely moment; as someone who now lives in Ohio, this is a disappointment; and as someone who grew up in Los Angeles, I stopped caring one series back. No matter what, however, having the Chicago-Cleveland series decided in the tenth inning of a game seven is just about perfect. It could not have been written better.

I’ve gone on the record in years past saying it’s more existentially satisfying for the Cubs to keep losing than to ever win the World Series — they crown a World Series winner every year, after all, but no one else has a 108-year-long streak of futility to their name, with the potential to add to it every season. Streaks like that don’t come around every year, or even every century. Seems a shame to throw something like that away on mere winning. But, you know what? Right now, there’s not a single Cubs fan in the world, living or dead, who agrees with me, if indeed there ever was. That’s fair enough. I hope they all enjoy their moment of winning, and the end of the long, long, long losing streak. The Cubs earned it.

And, also, if they ever make a TV series or a movie series out of the Old Man’s War books, Chicago in the text will be replaced by Cleveland, and it will still work. Sorry, Cleveland. You know I love you.

← Thoughts a Week From Election Day
View From a Hotel Window, 11/4/16: Frankfort, KY + New LA Times Article (on the Election, as it Happens) →