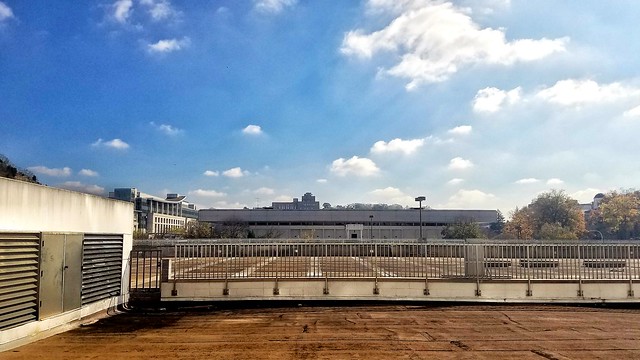 First, here’s the view directly out my hotel window here in Frankfort. I’m here for my last public event of the year, the Kentucky Book Fair. I have two events tomorrow: A panel at 11am entitled How Geek Entertainment Took Over the World, and a solo thing at 1:25pm on the main stage. Here’s the schedule for the whole event. And I’ll apparently also have a table where you can wander by and have me sign things. If you’re in Northern Kentucky tomorrow, swing on by. It’ll be lovely to see you.

(Actually, I just remembered I do have one more event this year: I’m interviewing Justine Larbalestier about her new book My Sister Rosa on November 18 in Columbus at the Book Loft. That should be fun! Come see us. But please note that while it’s a joint event, I’m there to promote Justine and her new book, which, incidentally, is very very good. I’m there in sort of a journalistic capacity.)

Second, I have a new column up at the Los Angeles Times, where I am a critic at large, talking about dystopias and elections, and why while dystopias are fun to read, you wouldn’t want to live in one. Naturally, I recommend the column, and suggest you read it and share it. And also, you know, that you go vote. So we can avoid the dystopia that’s staring us right in the face, waiting to happen.