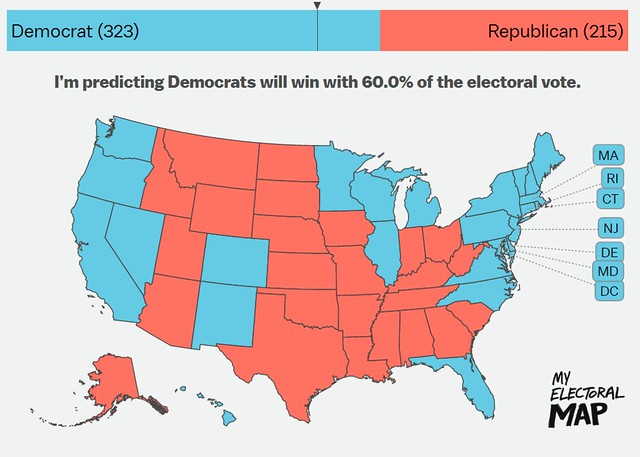 Here is the map I think is going to happen on Tuesday night, the one that carries Hillary Clinton to electoral victory and Donald Trump into heaving fits of frothing denial. I think it’s a realistic map (I also made pessimistic and optimistic maps, which I will show you a bit later), although I’m happy to concede that at least a couple states here are teetering, and a couple could go red and at least one could go blue. But to be honest I would be surprised if it varies too much from this map.

As ever, it seems, the key to whether Clinton supporters can breathe early or settle in for a long, anxious night will be Florida. If Clinton wins Florida (as I expect she will), then it becomes virtually impossible for Trump to win the election. If Clinton loses Florida but wins North Carolina, once again Trump is in a very difficult position.

None of this is news, of course; despite constant Clinton supporter panic over the months, Clinton has always been in the lead and Trump has always been the underdog. There are rather more ways for Trump to lose than Clinton. Clinton in fact can lose Florida and North Carolina and even New Hampshire, and still win, as evidenced by this pessimistic version of a Clinton victory map: 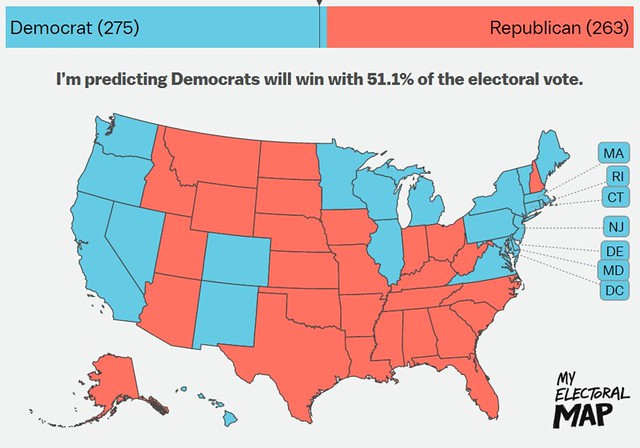 This isn’t a very happy map for Clinton supporters, since it will leave the Trump supporters howling and possibly riotous on Wednesday, but 270 is what you need, and this map gives it. And again it also illustrates Trump’s bind: He’s got a hell of an uphill climb to victory.

Having now just given the Clinton supporters here angina with this worst case scenario map, here’s what I think is the most optimistic Clinton map, short of a stunning blowout repudiation of Trump and the GOP, which to be honest I don’t see happening: 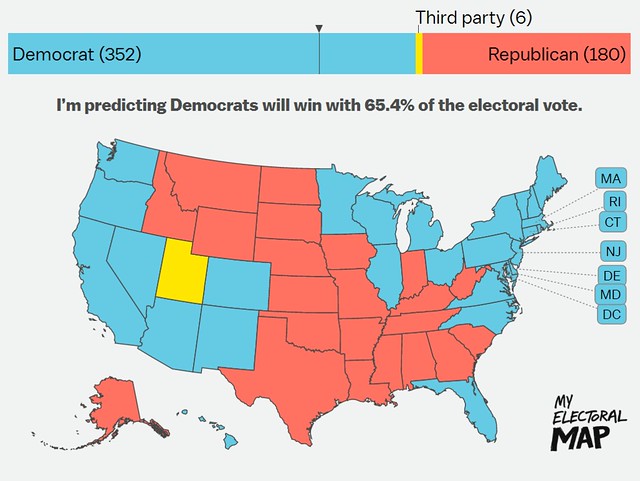 In addition to moving Ohio and Arizona into the blue, this map also gives Utah to Evan McMullin, a thing I currently find unlikely but not impossible given the general LDS dissatisfaction with Trump. Clinton fans would love to have Trump and McMullin split Utah and have her go right up the middle for the win, but, folks, listen to me: It’s okay to settle here. A McMullin win still deprives Trump of electoral vote oxygen.

I’ll note that my own “realistic” map is more optimistic in terms of Clinton electoral votes than either FiveThirtyEight (which as of 8am this morning, has Clinton at 292.5) or the Princeton Election Consortium, which has her at 312. In both cases, however, it’s important to note that they both have Clinton taking the election. At this point in time, there is basically no reputable estimator or poll aggregator that doesn’t have Clinton ahead in the electoral vote count.

Can Trump win? If you take my “pessimistic” map and give him Colorado or Wisconsin, then he can win outright. If he wins neither but takes Nevada (which after this week’s surge in early voting seems unlikely to me, but 538 still has it leaning red), then it’s an electoral vote tie, and the election goes to the House of Representatives, which realistically means Trump wins. It’s possible Trump wins. It’s also unlikely.

I feel pretty confident Clinton’s going to take it, but if you’re a Clinton supporter and still feeling edgy, I’m okay with that, too. Get out there and vote, and take all your other Clinton-friendly (or at least Trump-unhappy) friends with you. And while you’re at it, remember to vote Democratic down ballot as well. As I’ve noted before, Trump’s not the only problem here.

Again: Don’t panic, but don’t take anything for granted. When Trump loses — and I’m pretty sure he will lose — he’ll whine and complain and stomp his feet and continue to suggest the vote is rigged. He’s already doing that, complaining that the perfectly legal policy of letting people already in line when a polling time passes actually cast their vote constitutes “rigging,” rather than ensuring citizens their ability to exercise their right of franchise. If the vote is close, you best believe Trump, his people and the GOP are going to work the refs. So better if Clinton wins walking away.

That being the case, you know what to do: Vote, and this year, vote Clinton.

(Maps made with Vox.com’s electoral map maker: Click here to make your own map.)