Hey, I Feel Like Giving Away This Subterranean Press ARC of “The Dispatcher” 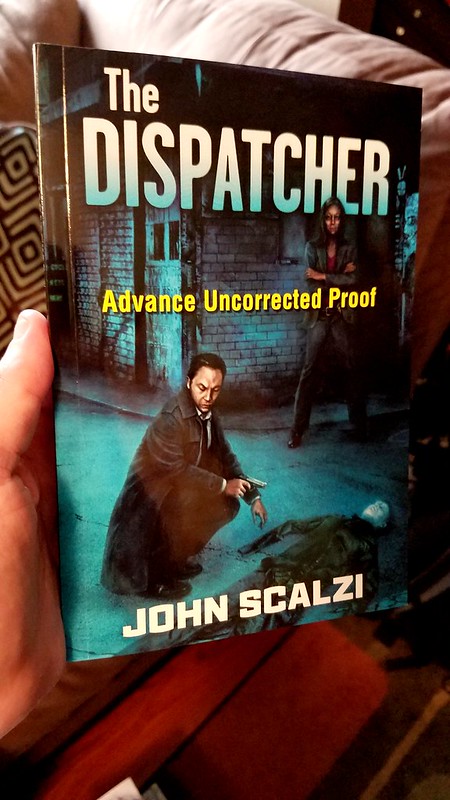 And I could give it away to you! Yes you, wherever you are in the world. I’ll even sign it (and personalize it, if you like).

Here’s what you have to do to enter:

In the comment thread attached to this entry, tell me what animal I’m thinking of right now.

(Note: I have told Krissy which animal it is, so I can’t change my mind.)

Two hints: It’s a land animal, and it’s a vertebrate.

Only one animal per entry, one entry per person. Entries with multiple animals will be disqualified as will any additional entries from anyone aside from the first. When you comment, in the “email” field, leave an actual email I can reach you at (don’t leave it in the body of the comment, unless you want everyone to know your email). Only comments here on Whatever will be considered for the contest (i.e., don’t leave comments on Twitter or Facebook or anywhere else).

You have until noon Eastern on Tuesday, December 13, 2016 to enter. I’ll close the comment thread after that.

If you like, while you’re guessing the animal to win the ARC, you can also pre-order the final print version from Subterranean Press, either in the unsigned trade edition, or the signed, limited edition (only 400 of those). The print version arrives in May, and features awesome cover and interior art by Vincent Chong. And of course, it’s currently available in the audio edition, read by Zachary Quinto.

Good luck with your guessing!

← Miniatures Arrives!
So Who Won the ARC for The Dispatcher? →

875 Comments on “Hey, I Feel Like Giving Away This Subterranean Press ARC of “The Dispatcher””