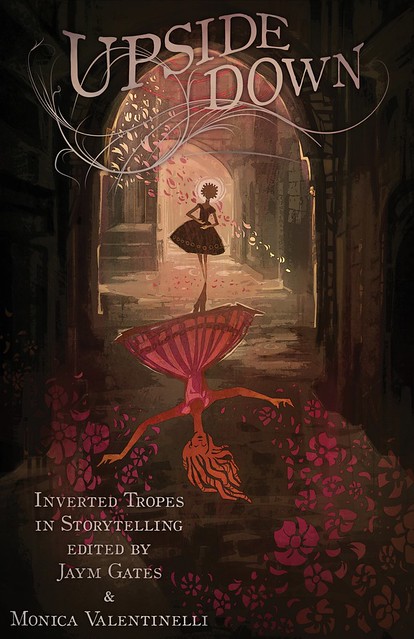 When Monica Valentinelli become annoyed with cliches in science fiction and fantasy, she didn’t get mad — she got creative. She’s here to explain how that lead to Upside Down: Inverted Tropes in Storytelling, the new anthology she’s co-edited.

I wish I could claim that I was brilliant enough to concoct the idea for Upside Down: Inverted Tropes in Storytelling with no inspiration or prompting whatsoever, but sadly that was not the case. In fact, the idea didn’t originate from my head at all, but my heart. After reading a flame war about how sloppy tropes and damaging clichés didn’t need to be changed, that Chainmaille Bikinis were just fine the way they were and it didn’t matter if the Black Man Died First, I became increasingly frustrated. Wait a minute, I told myself after a heavy sigh. Surely, these readers wanted stories that were achingly honest and reflective of the people and our world around us? Surely, they didn’t want to read yet another plot detailing how Scientists Cause the Apocalypse or the magic of Talking Animals? Or the Catholic Exorcism? Or the Villain Had a Crappy Childhood?

My frustration quickly devolved into angst in mere minutes the more I read, because I believe that tackling tropes in the context of a story is neither unusual nor politically-motivated. Many, many authors have utilized tropes in their stories either on a conscious or unconscious level to varying degrees in order to comment on them and manage audience expectations. Thankfully, as soon as I turned off Twitter my angst was quickly replaced with inspiration. It wasn’t enough for me to roll my eyes, I wanted to zero in on tropes in my own work in order to satisfy my creative itch. Initially, I had planned to write a collection specifically geared toward flipping tropes and clichés omnipresent in science fiction, fantasy, and horror. Not five minutes later, however, I realized how incomplete and misguided my efforts would be.

To do a proper job for the reader, I thought to myself, this wasn’t the sort of project that I alone should write. I recognized that if I were to approach the subject of tropes and clichés, I couldn’t ignore omnipresent and oft-repeated stereotypes about race, gender, sexual identity, etc. in addition to long-standing genre tropes. Excluding those tropes wasn’t an option for me. What’s more, I felt that my perspective would be so one-sided, the reader’s satisfaction would suffer as a result of my paltry attempt to satisfy my own ego. My big idea was bigger than me, and to pull it off I needed help.

After I came to this realization, I decided that my original idea would be best explored in an anthology filled with multiple authors. So, I asked Jaym Gates, who had worked with Jason Sizemore from Apex Publishing in the past, to be my co-editor. We pitched the collection to Jason, and it was approved contigent upon a successful Kickstarter. Then, we invited a core group of authors and asked them to write a story that flipped a trope they felt strongly about. Following an open call for submissions, we launched a Kickstarter in February 2016 and were able to buy more stories, bump the author’s rate per word, and incorporate more essays. As a result, we’ve produced a 400+ page, co-edited anthology filled with trope-smashing stories and essays penned by over two dozen writers.

Now that you’ve read how I got the idea for Upside Down: Inverted Tropes in Storytelling, you might be wondering if I feel I made the right choice. Was I correct in involving other authors? Or, should I have stuck to my original plan? Hands down, I absolutely feel I made the right decision. As a writer myself, I recognize that not all ideas I concoct are good or even great ones. Sometimes, though, good ideas evolve into something better when they involve multiple authors. Not only was this true for Upside Down, I am a different, kinder person after editing this project. I am very grateful I had the chance to work with such talented writers as Kat Richardson, Nisi Shawl, Maurice Broaddus, Anton Strout, Alyssa Wong, John Hornor Jacobs, A.C. Wise, Keffy Kehrli, and many others, because I learned so much. Together, our authors deftly accomplished a stellar commentary on tropes that, arguably, no one writer could do on their own. For, not only did every author choose a different trope, they tackled and subverted them in unique ways, too, through their art of storytelling and examination.

So there you have it. What started out as a feeling of angst, turned into a two-year successful project involving a few dozen people. The end result is a trope-smashing collection that — if we did our job right — will not only be satisfying for you to read, but thought-provoking as well.

Read “Super Duper Fly” from the anthology, by Maurice Broaddus. Visit the co-editor’s site. Follow her on Twitter.