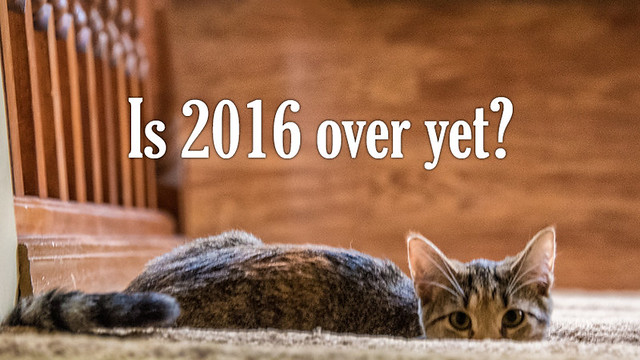 It is a truth universally acknowledged that 2016 was a monumental shit-show of a year, not only for itself — which would be enough! — but also because it’s now clear that it’s merely the beginning of a shit-show epoch, the depths of which have yet to be plumbed, and the best of which one can say is that hopefully incompetence will save us from true horror. But hey! At least I got some good Whatever entries out of it, right? So, uh, yeah, that’s something. Below you’ll find the 20 pieces that I think best represent the year here at Whatever, presented in alphabetical rather than chronological order.

It’s a politics-heavy wrap-up, which is not surprising in an election year, and in this election year in particular; it could have been even more election-heavy but I didn’t want to depress everyone more than they already are. There are other things thrown in there as well for balance, including some happy stuff (really!). No matter how you slice it, however, 2016 was a dark mess, and many of the best Whatever entries this year reflect that.

Despite the overall downer nature of this list, remember there are and continue to be good things in the world, and that you may still find them, and find them in yourself. I hope you have a wonderful Christmas Eve or first night of Hanukkah, or just plain Saturday, whichever the case may be.