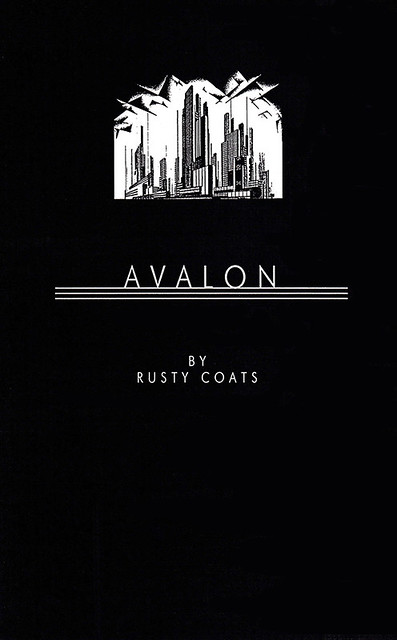 I’ve known Rusty Coats since he and I were twenty-something newspaper columnists geeking out over Coen Brothers films together, so it’s no surprise to find him today with a novel, Avalon, full of noir and speculative elements. Today in 2017’s first Big Idea essay, he’s talking about how to build a virtual city, meant to be a haven, but ending up as something else entirely.

RUSTY COATS:
The Big Idea behind Avalon is a dystopian future where a virtual reality city, once built as a beacon of hope for a world that has fallen down, has become a hedonistic destination full of brothels and bloodsport. Basically, VR meets Prohibition, with a conspiracy to seize control of the city – and humanity itself.

Avalon is told in the first person by Jack Denys, whose parents were part of the global project to build the virtual city. Jack had grown up on Campus, believing in the promise of a city that would unite a world scarred by nuclear exchanges, pandemic and economic collapse. But his encryption program was deemed an act of treason, and Jack, the last privacy hack, was sent to prison.

Now it’s eight years later. Still incomplete, Avalon was outlawed after a mysterious “programmer’s disease” killed thousands and left millions hopelessly addicted. The United Nations tried to destroy the metropolis but failed when a new mafia called the Digerati seized control. In an age of Prohibition, the Digerati have retooled the City of Light into an online Babylon. And Jack, who has vowed never to return to Avalon, has been hired by one of them for a job that turns out not be so simple.

I had been on a noir kick, reading a lot of Raymond Chandler and James M. Cain, while talking a lot with a friend who was launching a virtual reality company to document big-building construction. (Bonus: You can see through walls.) Throw in my love of Depression Modern design, an infatuation with FDR’s Works Progress Administration and a love of all forms of encryption and you get the major ingredients. I wanted to blend the language and style of Depression-era and noir fiction with an alternate future where VR is simultaneously a source of hope and despair, told through the flawed voice of an antihero.

To design the virtual-reality city, I turned to Norman Bel Geddes, the early 20th Century designer responsible for the iconic designs of the 1939 World’s Fair. Since Depression and Prohibition historically breed fanatics, I added an agrarian/Luddite sect called the Sons of David – a blend of my former work as a reporter covering Amish and Northern Californian off-the-grid communities. And, since everyone likes a good global conspiracy, I created technocratic cult, the Neuromantics, which promotes itself as benevolent caretakers of a wounded populace but, well, we’ve all seen how that usually turns out.

The Big Idea, then, is an amalgamation, and a bit of an homage. My grandfather worked in the Civilian Conservation Corps, part of FDR’s New Deal, and it was the first step in moving my family out of poverty in Southern Indiana. The designs of Bel Geddes and others were symbols of hope – that a streamlined, futuristic design could accelerate the country out of the Depression. And, as someone who has worked in media for 25 years, I’ve seen how every digital development – from AOL chat rooms to virtual reality immersions – are met with equal parts ecstasy and dread.

And we all need a little privacy in the promised land.