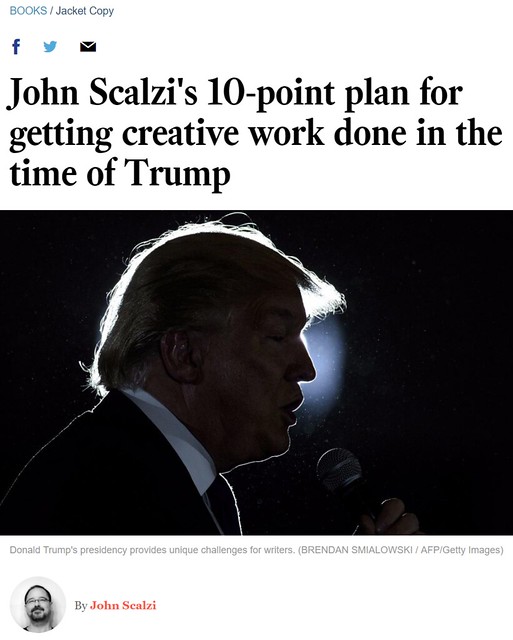 First, and in case you missed me talking about it on Twitter yesterday, I have a piece up at the LA Times site (a version of it is also in the Sunday newspaper) about getting creative work done in the Trump years — some advice about how to keep focus when it’s likely to be a challenging time for the creative class. Note that this advice generally probably also works for people working in professions generally considered “non-creative” as well, but I’m working with what I know here. Also, of course, if you’re neutral or positive on the idea of the incoming Trump administration, then this particular piece is probably unnecessary for you. Carry on, then.

Second, when I had the idea I originally thought to post it here, but then remembered a) that the LA Times books section has a freelance deal for me to be a “critic-at-large,” an appellation with actually a fairly wide remit, under which an article like this would probably fall, b) The LA Times has a pretty wide reach and the piece would probably be seen by more people there than here, both online and in print, c) also I could get paid, which is always nice. So I queried, and it was accepted, and it went there.

This reminded me that one of the things I did want to do this year is to place more essays/columns in newspapers and magazines and online sites, partly to purely strategic reasons — like, getting my name out to people who might not have otherwise heard of me, and to keep a healthy sideline in a form that I was writing in long before I became a novelist — and also for the fact that I like seeing my byline in lots of places. Once you’ve been a jobbing freelancer I don’t think this impulse ever leaves you.

So basically here is a thing this means: When I think of something I want to write about in essay form, I’ll probably ask myself the following questions:

If the answers are “yes,” “I can wait” and “I’m feeling reasonably industrious, actually,” then it’s possible I’ll try to place it elsewhere. Because that would be neat!

That said, knowing me like I do, the answers to the latter two questions are generally “I want it out immediately” and “I’m feeling lazy as hell,” so I don’t know if there’s actually going to be any impact to what gets put up here. Plus, you know. I like writing here. So there’s that, too.

I guess basically what I’m saying is perhaps I’ll be writing even more this year! I mean, aside from two novels, one non-fiction book, a video game, occasional LAT columns and of course what I put up here (oh, and Twitter, let’s not forget Twitter). The funny thing is I consider myself a very lazy person.