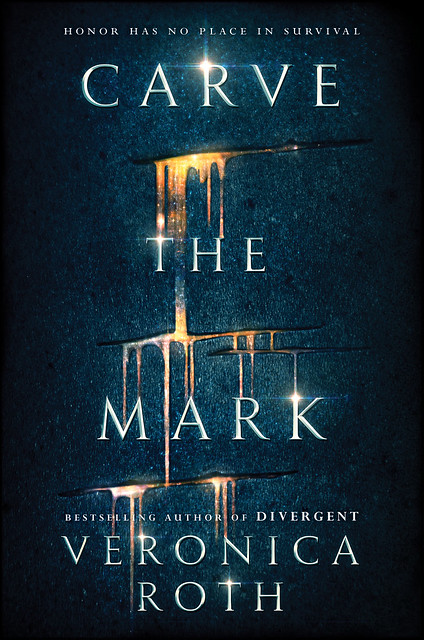 It’s no surprise that fantasy and science fiction authors do a lot of worldbuilding for their novels, but it’s one thing to say “worldbuilding” and another thing to offer a glimpse of what the work of worldbuilding entails. The good news is, bestselling author Veronica Roth is here you to offer that very same glimpse, getting into the nitty gritty of what she had to do to build up the universe of her latest novel Carve the Mark. Ready to dig in?

A lot of ideas led me to Carve the Mark. Too many, probably! But the basic plot– that of a young man who is kidnapped by the leader of an enemy country– has been with me for years. I kept thinking about how that would change a person, for better or worse. At first, he sees them all as enemies, but once you’ve lived among people and experienced their culture, is it possible to maintain that kind of unambiguous hatred? (Personally, I don’t think so.) And what if, in some ways, he understood those people better than his own? Would that make him feel guilty? Would he open himself up to friendship? Will I ever stop asking rhetorical questions?

In thinking about all these things, I had to create a world around him that felt complicated and real to me. I decided to use a highly sophisticated approach I call the “follow your gut” method of world-building. Okay, it’s actually not sophisticated at all– all it means is, I pay attention to what I find interesting, and I trust my curiosity to take me wherever it wants me to go. And here are some of the places I went while writing this book:

Politics: the thing about world-building is, even if you think you’re making it all up, you can’t really do that if you don’t know how things work, or have worked, in our world up until this point. Which meant, if I wanted to build a dictatorship that felt real, I needed to research dictatorships. I had lived in Romania for five months as a freshly married person on an adventure, and it’s a place that wears the scars of Ceausescu Communism everywhere (most apparently, in the Communist Bloc housing that towers over certain parts of Cluj-Napoca, where I lived). I had heard stories from the older people we knew there, and I had watched a fascinating documentary (The Lost World of Communism: Socialism In One Family (BBC Documentary Series, Part 3). Rather than dig in deeper to Ceausescu, I opted for a little more breadth– I turned, instead, to a different dictatorship that we frequently joke about here in the States, but is nonetheless horrifying: North Korea.

The interesting thing about researching North Korea is that you very quickly run out of new information about North Korea. (Book recs: Nothing to Envy by Barbara Demick, The Impossible State by Victor Cha, Without You There Is No Us by Suki Kim.) We just don’t know a lot of the things that are going on there. One thing that came up that I found darkly fascinating was that the power of Kim Il Song, Kim Jong Il, and now Kim Jong Un’s regimes comes in large part from their limiting information. The Internet there reportedly looks more like a card catalogue of resources the government has deemed acceptable. Visitors from outside the country stay at a hotel in Pyongyang that is literally on an island, separated from North Koreans who are not pre-approved. It’s easy to understand how a person might believe the misinformation provided by the government when that is the only information available. Knowledge, as we say, is power– and so is withholding knowledge. This is something North Korea has in common with Ceausescu’s Romania, the wielding of knowledge like a weapon against one’s own people.

I have no interest in directly adapting a country’s tragedies, whether it is Romania or North Korea, to flesh out my own work, but I decided to implement this basic principle– that power can be maintained by limiting information– in my work. So, in Carve the Mark, the Shotet dictator, Ryzek Noavek, maintains his power in no small part by outlawing the learning of any language aside from Shotet, which means the Shotet people have to rely on translations to understand the news. Translations that are obviously full of propaganda and lies.

Language: I wanted the language in Carve the Mark— down to the names– to feel new to me, a subtle way of forcing myself to question my own assumptions about what these people were like. That meant I didn’t want to base it on any existing languages, which meant I would have to…make one up.

And this was before David Peterson’s The Art of Language Invention came out, God help me.

But as it turns out, there are whole communities of con lang (read: constructed language) people out there, people who just make up languages for fun. They have helpful guides. And word generators. Observe:

I wanted the Shotet language to be a little like German or Hungarian– harsh-sounding to those who don’t speak it, but oddly beautiful when you get to know it. My husband and I went to a Hungarian Reformed Church while we lived in Cluj, and let me tell you, there is nothing cooler than being surrounded by people singing somewhat dirge-like Christmas songs in Hungarian while a huge organ plays in the background. It made a language that otherwise made no sense to my ears into something haunting and beautiful.

So because I’m That Sort of Person, I made up a few simple rules for how I wanted the language to sound. Shotet’s language rules are: hard sounds instead of their softer counterparts– K instead of C, Y instead of I– few “th” or “sh” sounds, and long “o”s and “a”s, among others. I used the sounds in Hungarian as a jumping off point, though the result bears little to no resemblance to it. The result are names that sound unfamiliar to me, and, unfortunately, are difficult to pronounce, something I…didn’t quite consider at the time. Whoops.

Ritual: I fell about a credit short of a religious studies major in college (damn you, capstone class!), and I’ve always been fascinated by rituals. They are a way of understanding a person’s priorities and something of their inner life–and they don’t have to be religious, either. I find them to be a powerful way of building a fictional culture.

The most significant ritual I devised for this story was the sojourn– a rite in which the Shotet pile into a giant spaceship and cruise around the galaxy for awhile, to honor their history, then descend on a planet (a different planet each year) to scavenge from it. The scavenge is poorly understood by outsiders, who look down on people rifling through garbage, as it were, but to the Shotet it’s a way of recognizing the strengths of other cultures, of repurposing the things they discard that still have value and giving them new life. As the wife of a man who is constantly pointing out objects that other people neglect or turn their noses up at– Dacia cars from the 90s, red enamel radiator knobs, and blazers with GIANT SHOULDER PADS come to mind– this felt like an oddly endearing practice, something that Akos could initially scorn but come to appreciate as he learns that his enemies are not mustache-twirling Snidely Whiplashes, but real, complicated…and, indeed, not all enemies, period.

← A Boy and His Hat
The End of the Obama Years →