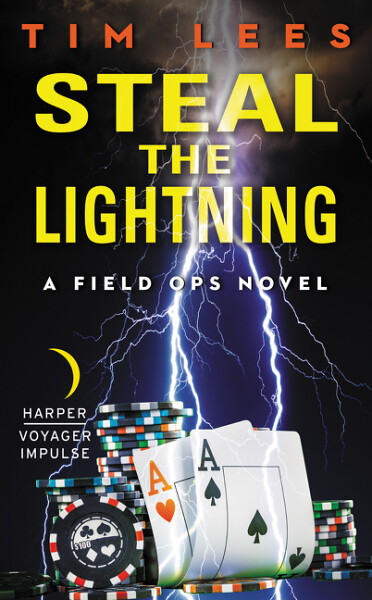 For today’s Big Idea, author Tim Lees thinks on the interactions of gods and humans, what the gods represent, and what it all means for his new novel, Steal the Lightning.

So, in my last couple of books, I solved the energy crisis. No big deal; you just dig up a few ancient gods, extract the power from them, and run it through the electricity grid. Except, as readers of The God Hunter and Devil in the Wires will know, it’s never quite that simple, or that safe. The gods are alive. They have an undefined yet powerful influence on us poor humans, and – inevitably – things go wrong.

That’s where Chris Copeland, professional god hunter, gets called in. He’s something of a reluctant hero, and experience has made him a little too aware of the dangers in the job. But every now and then, something happens to get him personally involved, and that’s when his flare for the work really shows.

In the new book, Steal the Lightning (HarperVoyager), I wanted to take a closer look at the relationship between gods and men. Now, the book itself is a thriller – there’s mystery and double-dealing and some big action sequences, plus a fair amount of humor, too. But I hope that there’s another layer, one the reader might consider once they’ve reached the story’s end, and which was there, in the back of my mind, while I was writing it. This isn’t allegory – the gods don’t actually stand for a specific thing – but they belong to a class of phenomena that exists here, in the real world, and which has a huge and complex influence upon our lives. I’m talking about any powerful force that affects how people think and act and interpret reality; a force which, in this case, is not of itself allied to any particular cultural, political or ethical notion; that is, as it stands, neither good nor evil, but reflects the values placed upon it by its adherents.

To take the obvious first, I might say the way I use the gods in the book reflects my own feelings about religion. I realize this may be a hot button for some of you, but if you think of all the things done in the name of religion, you’ll maybe see what I’m getting at when I say this covers everything from alms-giving to terrorism. It inspires the most generous of acts and also the most hateful. I’m not religious myself, but I’ve known a lot of people who are, some of whom I’ve admired greatly, and others, I’ve thought were pretty despicable. My conclusion, as an outsider, is generally that, whatever you are, religion is likely to make you more so. If you’re a self-righteous prick, it gives you permission to be an even bigger self-righteous prick. If you’re a person who tries to do good, it can focus you and make you resolute in your aims. I’ve seen both. And, while I say again, the gods don’t represent religion per se, some of my feeling about that went into their depiction in the book, and into the motives and responses of the various human characters with whom they interact.

Then again, maybe they represent drugs – medical or recreational, all with the ability to change people both physically and mentally – yet frequently, with a whole bunch of unwanted side effects, as well.

Or they reflect technological and social forces. The mass media, perhaps – a great source of information and entertainment, but, likewise, a distorting lens through which we view the world, and the promoter of a vacuous celebrity culture that these days dominates everything from sport to politics.

Or, to take a direct analogy, drawn in the earlier books, they’re on a level with other sources of power – coal, oil, nuclear. Electricity’s a wonderful thing – you wouldn’t be reading this without it – but its production still holds risks for someone, somewhere, whether it’s nuclear meltdown or a mining disaster. Nothing is ever truly safe.

It was soon apparent that I’d have to explore these issues from a variety of angles, and with a variety of different characters. And the best way to do that –

Cue: road trip! I’m a Brit, and I love traveling in the US. There are a million places I could have taken in – Arizona, or the Pacific North-West – unique landscapes with truly iconic scenery and extraordinary histories. But I had to limit myself, and let myself be driven by character, rather than scenery. The big question was this: what sort of people would want their own, personal god? And what effect would it have on them?

You see, this isn’t so much about the gods, as what human beings want from them. You take this immensely powerful, unpredictable force, and drop it in the laps of people who are desperate, or greedy, or lost, or disturbed – and then what happens?

So we meet a woman trying to extend her life, unaware she’s picked the worst possible way of doing it. A preacher, bringing false hope to the rust-belt with his very own performing deity. A multi-billionaire with an eye on the presidency, and a conviction that the country took a wrong turn in the Civil War…

Then there’s Chris’s partner, Angel. When she was young, she dreamed of writing music. A close encounter with a god sets all those dreams whirling through her head again, but now she can hear the music – she just can’t remember it afterwards.

I wanted to watch the chemistry when gods and humans interact. When individuals acquire a power they can’t control – but think they can – and certainly don’t understand. Because to some extent, we’re all in that situation, at one time or another. How we deal with it – selfishly or generously, foolishly or wisely – is a measure of the kind of people that we are.