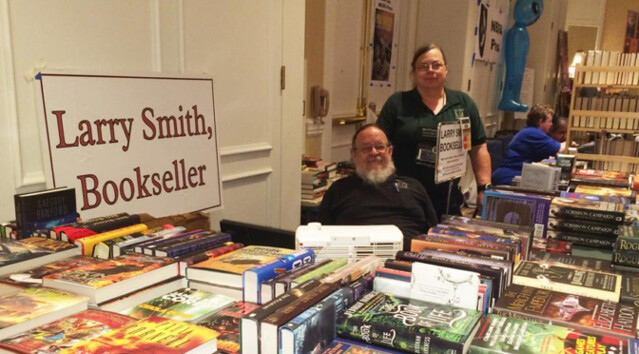 I learned on Friday that bookseller Larry Smith had passed away and it’s fair to say I was more than a little shocked by the news. I’d seen him and Sally less than a week before at Arisia and had conversation with both. It’s fair to say that Larry and Sally were two of my favorite convention booksellers, not only because they always stocked lots of my books, but because they always stocked lots of everyone’s books — there was always something good to read when you browsed Larry’s shelves. He was also the bookseller I always made sure to sign stock at, since I knew he traveled far and wide and would take my books places I might not otherwise get to. He was cantankerous and opinionated and I always enjoyed talking to him. It’s still hard to believe he’s gone.

My thoughts now are with Sally and his numerous friends, who will all miss him deeply. As for me, many of the books on my shelves were originally on his. I think I’ll take one down tonight and read it in his memory, and with thanks.