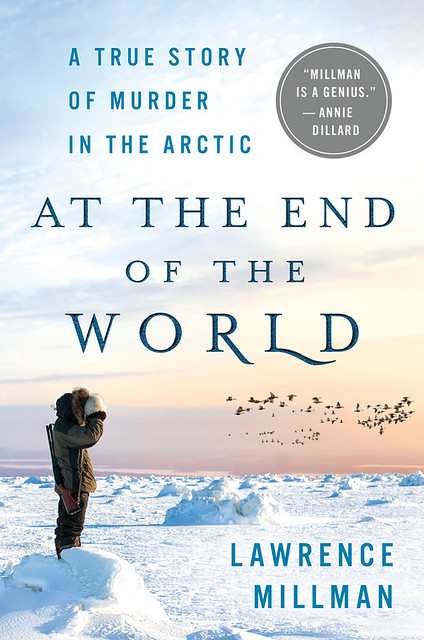 A horrific event took place decades ago — but could the key to explaining it exist in the modern day? Author Lawrence Millman asked himself that question as he undertook the writing of At the End of the World, and the answer to it surprised even him.

Here are the bare bones of the book’s story: One man declares himself God, another man declares himself Jesus, and any person who doesn’t believe in them is Satan.  How do you deal with Satan or, indeed, a plethora of Satans? You dis-pose of them, of course.  And so there were 9 deaths in a relatively short period of time.

What I’ve just described is not an attempt by rabid Christians to emulate ISIS terrorists or perhaps a previously undocumented episode from the Spanish Inquisition.  Rather, the murders occurred in 1941 in the Belcher Islands, a remote archipelago in Canada’s Hudson Bay.  So remote were these islands that their Inuit inhabitants experienced First Contact with qallunaat (white people) only 25 years earlier.

During my visit to the Belcher Islands in 2001, Inuit elders talked to me about the 1941 tragedy.  Talked to me, I should say, with some difficulty, for their memories of the events were quite painful. Yet the book I expected to write about this virtually unknown tragedy refused to be written.  One year passed, then another year, and — nothing.  It was as if the story was downright hostile to the idea of being put down onto paper.

In 2013, I was in Tasiilak, East Greenland, researching another obscure story, one that concerned a cannibalistic monster called a tupilak attacking a village, when I heard about the following incident: A local teenager was so busy texting that she didn’t see the polar bear that was approaching her. At the last minute, however, she saw it and screamed, whereupon the bear loped away.

Suddenly I had my first Big Idea — screens can deprive us of our lives, just as the would-be deities deprived the Inuit in the Belcher Islands of their lives…

So we have murder in the name of God in a remote part of the Arctic and perhaps murderous obsession with what might be called iGods — each represents a particular world coming to an end. Taken together, these two themes danced a sort of pas de deux in my mind. The book now demanded to be written, and my pen went flying across the page, sometimes bearing my own words, sometimes the words of the Inuit elders I talked to about the murders. Sometimes, too, my pen would fly into a rant, as when it wrote: “Better tango rhythms than algorithms!”

At the End of the World concludes with the present, with one of the Belcher Island elders — once upon a time a highly traditional hunter-gatherer — e-mailing the following note to me: “Everyone here…they’re all going digital now, and they look at nothing else. Me, too! I am how you say it screened in…”