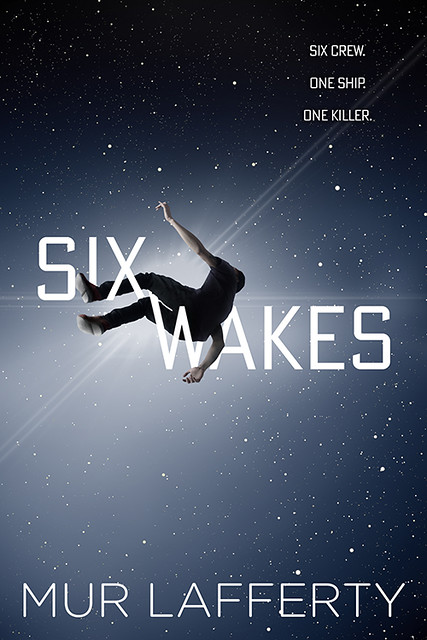 Cloning stories are hard to tell because they’re such a staple in SF history that it’s challenging to come up with a new twist. But I tried to do it with Six Wakes by combining a few different Big Ideas.

You know, there are some weird sex things in a lot of cloning stories.

It seems in classic SF, any man who clones himself will inevitably end up having sex with himself. (I am including stories where a character travels to the past and meets an earlier or later version of himself in this category.)

Having a bunch of clones running around willy-nilly, sexing the place up, messing with their children’s inheritance, and giving each other alibis when they commit crimes, seemed… irresponsible. Most religions also wouldn’t like it. Authorities would come down pretty hard on cloning once these things became possible to the populace at large.

Thus, I first thought about what kind of international rules involving cloning would have to be developed. They might include no multiplying yourself, sterilization, and no changing of the DNA matrix stored on the computer…. among other things. These are some of the basic rules governing cloning in Six Wakes.

Another key element of the story came to me when I was playing the game FTL, a space battle game where you manage the lives of your crew and the state of your ship. One of the technologies available to your ship in the game is a cloning bay to extend your life if you die. It’s not foolproof, though; if your cloning bay goes down during battle, and someone dies, they have to wait for someone to fix the system so they can be cloned again. But, I wondered, what would happen if the whole crew died at once?

Six Wakes is set on a generation ship. When I read books with similar settings, I thought it was sad that generations (hence the name) of people are born and live and die on a ship for the benefit of the future, knowing they will never set foot on the planet upon which their whole existence is built around. What if the ship had the same crew the whole time, cloned whenever they die, while the rest of the population slept?

My opening scene was the first one I thought of, with the crew all waking up in vats. Usually, in this world, when you wake up in a new cloned body, doctors and lab techs are there to help you out, help you acclimate, and get you clothes – and there certainly weren’t any dead bodies all around you. But our crew all wake up on their own, have to handle their own way out of their vats, and figure out what the hell is up with the gore floating around their heads. Someone has killed them, turned off the gravity drive, and damaged their AI. Time has passed and memories are missing, so each person doesn’t know which of the six was the murderer; they have to suspect even their former self.

So those were the building blocks. Murder clones in space. Or “Murder Clone Space Bastard,” as a friend calls it. I made it my working title.

I worked out the laws governing clones, and then of course looked to see how many of them my characters could break. You see, the crew are all criminals, promised a clean slate and a bit of land at the end of the road if they can get the ship to its destination. Rot as a clone in prison on Earth, or help humanity get to a new planet with a new life at the other end? Pretty clear decision. Worried about the implications of the nature of their crimes being known, the powers that be declared an absolute gag order regarding the clones’ past. Only the AI, the ultimate overseer in case the clones got out of hand, knows what everyone had done.

Lastly, I’d like to talk about the title. When beloved writer Jay Lake was in his last days, he threw himself a wake so that people could come and say good-bye. I loved the idea as a poignant way to celebrate someone’s life when they were still around to appreciate the party. The idea of the living wake stayed with me, and I thought if the clones woke up with their cloning technology smashed, they would fear death for the first time in their lives. It would still be forty to sixty years in the future, but they would have a clear death sentence after living for hundreds of years. The title of Six Wakes is a tribute to Jay’s memory.