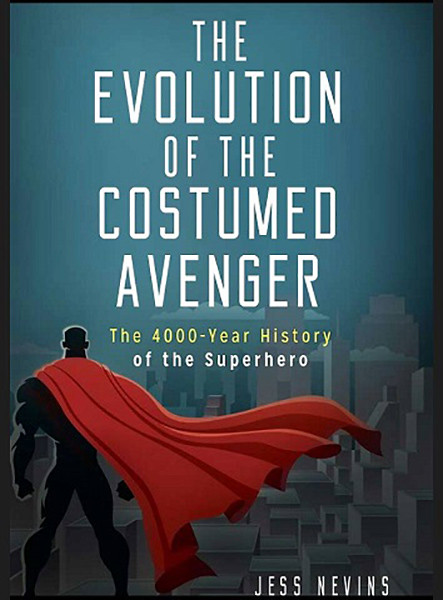 One day author Jess Nevins decided to see how far back the origin story of “superheroes” went — it wasn’t Batman or Superman, folks — and the answer to the question (or the answer he arrived at) was both further back in time and more complicated than he could have ever expected. The result: His new book, The Evolution of the Costumed Avenger. And also: This Big Idea piece.

The Big Idea behind The Evolution of the Costumed Avenger was my attempt to answer a long-running question in the comic book community: where did superheroes come from? In my Encyclopedia of Fantastic Victoriana I had said that the superhero arose not out of twentieth century cultural movements and dynamics and cultural trends, but out of nineteenth century movements, dynamics, and trends. (Sorry, partisans of Johnston McCulley and Baroness Orczy, but it’s true: Zorro and the Scarlet Pimpernel were inheritors of a tradition, not inventors of one).

But when I was observing the latest in attempts to answer this question and was shaking my head (more in sorrow than anger) at the answer given, it occurred to me that perhaps my answer wasn’t that much better, and that I hadn’t give the question its due. Did the superhero come from the nineteenth century? That’s how I’d written it, back in 2004–but was there more to it than that? Did the superhero’s roots lie deeper still, and farther back than Victoria’s reign?

It’s rare that one gets or takes the opportunity to correct Internet Misinformationtm in print, and I intended to treat the question seriously in a reasonably-sized monograph, but as I soon discovered, the question of the superhero’s origins isn’t easily answered to anyone’s satisfaction. First I had to define what I meant by a superhero, something that proved to be surprisingly tricky. (For every definition of what a superhero is, there are exceptions to it. Every definition. Yes, even yours). After a lot of thought I came up with a better way of approaching the matter of definitions, but simply writing out that new method took up most of chapter one. (And I hadn’t even gotten started on the history of superheroes yet!)

And then I reached Robin Hood, a significant proto-superhero, who is the most famous of the noble outlaws of the Middle Ages–not the only one, merely the best-known. And beyond the noble outlaws are the knights of King Arthur, and beyond them are El Cid and the heroes of medieval epics and ballads, and then Roland and Beowulf and the Alexander of the Alexander Romance…

…and so on and so forth, always working backwards, always tracing influences, until I reached the first major work of literature in human history, The Epic of Gilgamesh. (By now I’d abandoned all idea of my “History of the Superhero” being either reasonably-sized or a monograph). Gilgamesh as the first superhero? Okay, cool, that would make a good beginning for what I now knew would be a sizable book.

Except–and here was the part that complicated the writing of the book–I had to take a good look at Gilgamesh, the way I did at all the proto-superheroes, and I concluded that he made a great epic hero but not a particularly good superhero. Briefly: he lacks what we would think of today as a heroic, selfless motivation. Gilgamesh is a great epic hero, but not a great person–not “heroic” as we’d now think of it. Gilgamesh’s sidekick and B.F.F. Enkidu, on the other hand, has the selfless motivation as well as the other elements of the superhero.

So Enkidu it was, to begin with, and after him the major heroes of literature and popular culture. But research on a subject like this is exponential and fractal; there’s always more of it to do, more items of interest or awesomeness to discover, more connections to make, more inferences to draw. So I found out about the latrones, the heroic outlaws of ancient Rome (and the forefathers of Robin Hood). And about Nectanebo II, last pharaoh of Egypt’s Thirtieth Dynasty and the ancestor of every heroic sorcerer in comics. And about the delightful Mary Frith, grandmother of Batman and every other urban vigilante. And about medieval proto-superheroines of color; if Enkidu was the first POC superhero, the “lady knights” of the middle ages were the first POC superheroines. And about Talus, the first heroic android (and from the sixteenth century, to boot!).

And so on. It all turned out to be more fascinating and complex than I’d ever anticipated. Superheroes didn’t evolve linearly; they are a river with many tributaries, whose source lies four thousand years ago but whose individual elements are disparate and widely scattered in time and place. That’s what I hope readers take away from The Evolution of the Costumed Avenger (I mean, besides the fact that Mary Frith was freaking cool): that the superhero is neither American nor twentieth century–nor white or male, for that matter–but belongs to everyone, and has deep, deep roots in human culture.