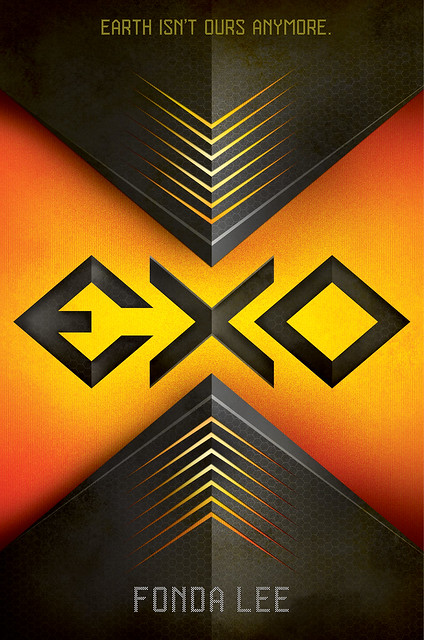 There’s more to alien creatures than green skin or an extra set of eyes. Fonda Lee, author of Exo, comes around to tell you why, and how it affects her new novel.

You know, there just aren’t enough aliens in YA science fiction these days.

I’d argue there isn’t enough YA science fiction in general, but where are all the aliens? That was the random thought that gnawed at me a few years ago, when YA was dominated by dystopias to the extent that seemingly anything science fiction was lumped in with The Hunger Games. It seemed to me that a significant number of the extraterrestrials to be found in current YA SF fell into two categories: the hot alien boy next door, or the scary type that want to wipe out the human race. Good (sexy) aliens and evil, apocalypse-bringing aliens. And yes, we’ve had plenty of both in adult fiction as well, but those aren’t the ones that stand out to me.

I wanted more aliens like the Oankali, or the Hoots, or the Formics, or the Moties. Because all alien stories are actually human stories. Non-human characters in fiction provide a means for us as writers and readers to hold up a mirror to humanity. More complex and interesting aliens with nuanced motives, who have varied and multi-dimensional interactions with humans, show us a picture of ourselves that is more honest, more candid, higher definition. Like seeing our own faces filmed in 70mm and projected on an IMAX screen. Simple, reassuringly good and evil aliens offer up a reflection that’s more like a smiling selfie taken with an old camera phone.

There are some who would argue that teenage readers don’t want, or wouldn’t appreciate or comprehend, more thoughtful alien stories. Kids want lots of action and romance! To which I say, first of all, the teen readers I’ve met are remarkably savvy and intelligent and more than capable of appreciating the complexity and shades of gray in society. And second, why not have it all? Why couldn’t I write an action-packed YA novel that was also ethically complex?

That’s what I set out to do. I wanted to tell an alien invasion story that was different from anything else I’d read or seen in YA fiction by getting past the arrival, invasion, and war part of the narrative to explore the idea of a world post-colonization, one in which humans have both benefited and suffered. I wanted aliens on Earth to be the norm, not the event itself.

And I wanted to tell the story from the other side. In YA fiction there is no lack of plucky, brave, teenage rebels who want to overthrow the system. Could I make the reader root for someone who enforces alien rule over Earth? Someone who is in the system, who benefits from it and defends it despite its flaws, yet is still heroic and tries to do the right thing, even when he is not always sure what the right thing is?

As a writer I see gray instead of black and white. I dislike easy answers and I put my characters in situations where there are none. We Americans absolutely adore our stories of rebels vs. oppressive powers but in real life we proudly celebrate our military forces who wage war on insurgents in countries where we are considered the evil empire. I have no political axe to grind in my fiction, but I love making people question themselves and was eager to write a story in which the reader could conceivably sympathize with either the “terrorists” or the “oppressors.”

Layers started naturally developing in my story that made it more personal to me. The protagonist, Donovan, comes from a broken family and has to deal with conflicted feelings about his parents’ choices. (My own parents had a rocky marriage and eventually divorced.) He also faces the continual dilemma of his in-between identity: as a human with alien alterations, he is considered too alien by other humans, but of course to the aliens he is still just a human. At the time I was writing Exo, I honestly didn’t even realize that I was infusing the story with an allegory for second-generation or mixed-race children until my editor pointed it out a long time later. Which goes to show that sometimes we writers can be all deep and subtextual without even meaning to be, just by bringing more of ourselves to the page.

Exo is, at the end of the day, a story about why people take the sides they do, and how difficult it is to be torn between one’s own parents, and how to grow up and figure where you stand as an adult when the world is such a complicated place. It’s almost funny to me now that the Big Idea that sparked the whole thing was as simple as: give me more and better aliens!